The FDA Approval of a Covid Pill Would Be a ‘Gamechanger’

A COVID-19 pill is poised to hit the U.S. market after a Food and Drug Administration panel narrowly recommended that Merck’s drug Molnupiravir be granted Emergency Use Authorization.

The FDA panel voted 13-10 that the antiviral drug’s benefits outweigh its risks. If the FDA grants the EUA, Molnupiravir could become first drug that Americans could take at home to treat the coronavirus.

There are major implications if the FDA grants approval to Molnupiravir. First, it signals a shift towards therapeutics as becoming a more prominent tool in the ongoing fight against Covid.

Second, it raises questions about the necessity of Covid vaccine mandates, particularly as the federal vaccine mandates continues to incur legal setbacks. If the mRNA therapies marketed as ‘vaccines’ continue to fail to halt the transmission of variants such as delta and omicron, then it will further call into question their efficacy and reliability.

Third, Molnupiravir may prove to be a safe and effective alternative to vaccines in mild-to-moderate Covid cases. Since the risk profile for Covid varies greatly by age, and is impacted by factors such as obesity and immunocompromisation, the FDA authorization would provide an ample alternative for younger, healthy Americans to choose to forego the Covid prophylactic shots.

Fourth, there are many people who believe that Molnupiravir and Ivermectin, both manufactured by Merck, are essentially the same product. This will be unpacked in some detail below.

It is important to at least give a cursory look at the FDA briefing document that guided the panel discussion on Tuesday.

“This Advisory Committee briefing document summarizes the data submitted to support the Emergency Use Authorization (EUA) of molnupiravir (MOV) for the treatment of mild-to-moderate coronavirus disease 2019 (COVID-19) in adults who are at high risk for progression to severe COVID-19, including hospitalization or death,” the FDA briefing document states.

“Currently three antivirals monoclonal antibodies (mAbs) are authorized for the treatment of mild-to-moderate COVID-19 in individuals who are at high risk for progression to severe COVID-19, including hospitalization or death. These products all require intravenous (IV) or subcutaneous (SC) injection for administration. MOV is an oral prodrug with antiviral activity against severe acute respiratory syndrome coronavirus-2 (SARS-CoV-2),” the FDA briefing document added.

The FDA briefing document can be read in full below:

The entire FDA panel meeting can be viewed in full below. It is encouraged that people take at least a minute or two to view the decision-making process:

At 59:00 into the FDA meeting, Dr. Sean Curtis, the Senior Vice President of Global Regulatory Affairs and Clinical Safety for Merck, said the clinical data on Molnupiravir showed impressive efficacy and safety. 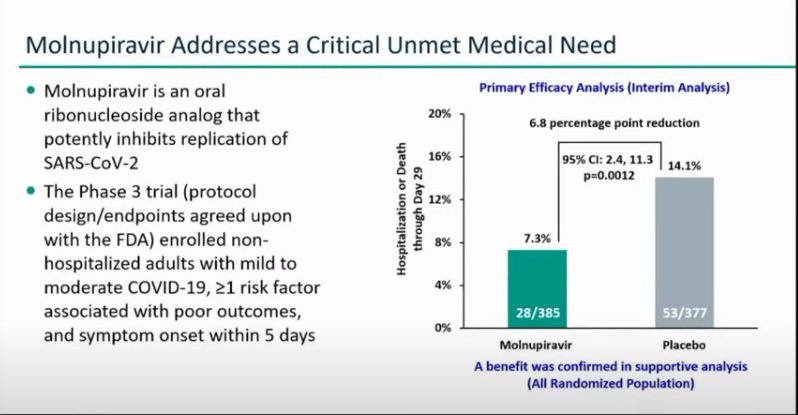 At approximately 1:02:00 into the meeting, Dr. Daria Hazuda, PhD., who leads research for infectious diseases and vaccines at Merck, explained the mechanism of action for Molnupiravir. Dr. Hazuda gets into the technical chemistry of Molnupiravir, before explaining that the oral treatment has similar efficacy across a broad spectrum of SARS-CoV-2 variants. (Note: Clinical results for the Omicron variant were not discussed.) 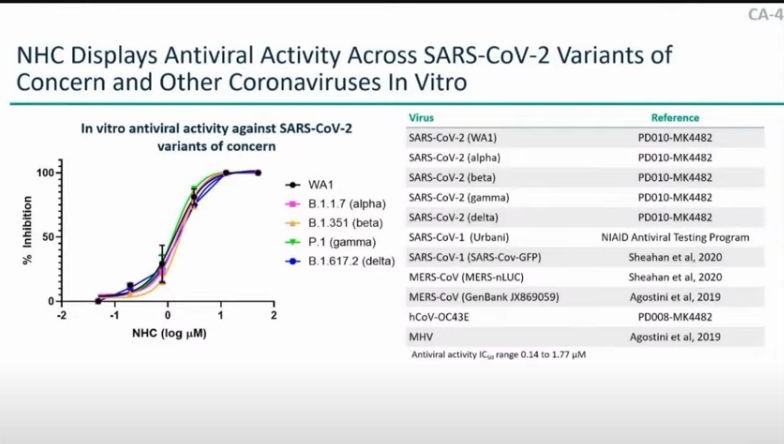 “Note that the antiviral activity is similar across SARS-CoV-2 variants of concern, including alpha, beta, gamma, delta, as well as mu,” Dr. Hazuda said.

The U.S. media has displayed considerable hostility to Ivermectin as a potential Covid-19 treatment. This has raised questions among many about the differences with Molnupiravir.

There is a fascinating point raised about whether Molnupiravir is just ‘re-packaged’ Ivermectin. This will be discussed in some detail below.

There are many subscribers to the belief that Ivermectin is already a safe, effective, and importantly, cheap treatment for Covid-19, however. Alternatively, the U.S. media have scorned those who swear by the treatment with castigation that it is nothing more than an anti-parasitical ‘horse dewormer.’

CNN PR professional Oliver Darcy is indicative of the media campaign to slight those who tout the efficacy of Ivermectin against Covid-19. 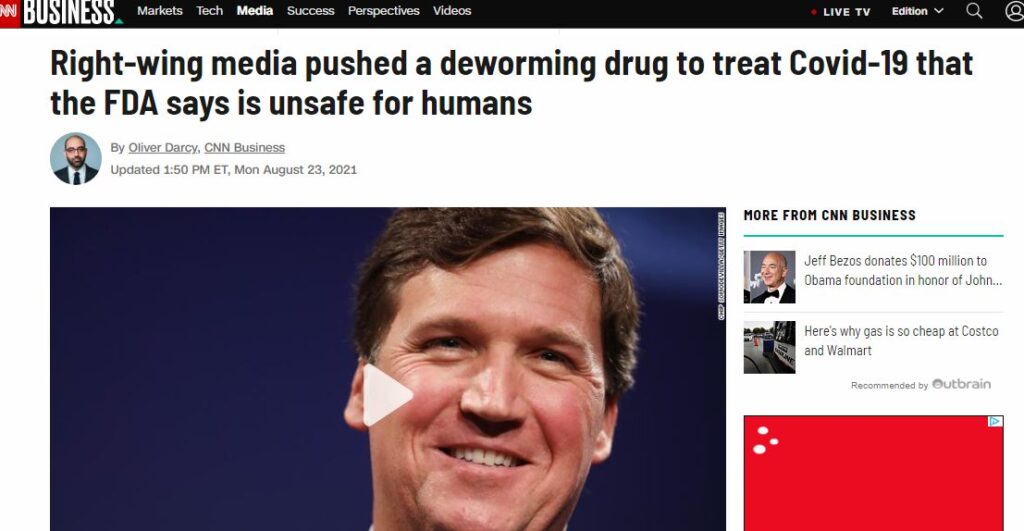 “Right-wing media pushed a deworming drug to treat Covid-19 that the FDA says is unsafe for humans,” Darcy claimed.

The FDA, however, had cautioned that people should not use the Ivermectin treatment that is intended for animals.

“People are purchasing various highly concentrated animal ivermectin drug formulations such as ‘pour-on,’ injectable, paste and ‘drench’ that are intended for horses, cattle and sheep, and taking these drugs has made some people very sick,” the FDA wrote in a letter to veterinarians. “Even if animal drugs have the same active ingredient as an approved human drug, animal drugs have not been evaluated for safety or effectiveness in humans.”

The Centers for Disease Control and Prevention has noted that Ivermectin is not currently approved for the treatment of Covid-19. However, a CDC guideline for refugees issued in 2019 shows that it was a regular part of the prescribed regimen for preventing parasites from being brought into the United States.

“These guidelines are recommendations for the International Organization for Migration (IOM) physicians and other panel physicians who administer overseas predeparture presumptive treatment for intestinal parasites,” the document reads.

“All African refugees who did not originate from or reside in countries where Loa loa infection is endemic (Box 1), with exceptions noted in this document, should receive presumptive therapy with… Ivermectin, two doses 200 mcg/Kg orally once a day for 2 days,” the CDC lists as one of the medications.

While critics rightfully point out that the FDA has not authorized Ivermectin for treating Covid-19, it is not true that the medication’s potential effectiveness has not been studied.

“Moderate-certainty evidence finds that large reductions in COVID-19 deaths are possible using ivermectin. Using ivermectin early in the clinical course may reduce numbers progressing to severe disease,” a study in the American Journal of Therapeutics published in June 2021 concluded. “The apparent safety and low cost suggest that ivermectin is likely to have a significant impact on the SARS-CoV-2 pandemic globally.”

So, is Ivermectin substantially different than Molnupiravir, which is also manufactured by Merck? Reuters did a “fact check” on the issue that plausibly argues that the chemistry of the two drugs is indeed different.

“Dr. Stephen Griffin, virologist and associate professor at the University of Leeds (here), told Reuters that molnupiravir is not repackaged ivermectin.”

“The two drugs have ‘dissimilar chemistry’,” he said. “There is no way that Merck is doing this,” he said.

“Molnupiravir is a derivative of a nucleotide that, predictably, interferes with the RNA replication of the virus. While Ivermectin does also have a defined mechanism of action, BUT it’s against ion channels found in parasites,” Griffin said.

“Paul Auwaerter, the Clinical Director of the Division of Infectious Diseases (here) at Johns Hopkins Medicine told Reuters via email that the only similarity the two drugs have is that they ‘have been brought to the FDA for market approval by the Merck Company’,” the report adds.

“The professor pointed to structural differences between the two drugs, which can be explored in papers here and here and drug class differences,” the report notes.

“Ivermectin is classified as a macrocyclic lactone. It is derived from Streptomyces avermitilis which is a bacterium,” Dr. Auwaerter said. Molnupiravir, rather, is classified as a ‘nucleoside analog’ (like some HIV medications) and ‘works as an antiviral,’ he added.

Campbell discusses the scientific literature on Ivermectin that provides some evidence to the claims that it is a safe and effective drug to combat SARS-CoV-2 infections.

Interestingly, Campbell refers to a paper by an Adjunct Professor of Medicine from Baylor University named Leslie Adesuyi Ajayi, M.D., PhD., who specializes in pharmacology. The paper itself bears reading and some citation, because it is informative and trustworthy. It does not subscribe to the typical narrative bivalence that frames debates about prescribed therapeutics like Ivermectin, if they are the ‘enemy’ of vaccines.

Dr. Ajayi compares Ivermectin and Molnupiravir in an illuminating passage.

“Ivermectin is an FDA-approved, WHO essential drug used as broad spectrum antiparasitic, antibiotic and RNA viruses, including HIV, Zika, MERS corona virus. It is being repurposed as a therapeutic agent for COVID-19, after in vitro studies in Vero/hSLAM cells, showed that it caused a 5000-fold inhibition of SARS-CoV-2, (99.98% at 48 hours) with an IC50 of 2.8µM. The corresponding in vitro IC50 of molnupiravir for SARS-CoV-2 is 0.3µM in Vero cells and 0.08µM in Calu-3 Cells.”

“The IC50 of Molnupiravir shows it to be a more potent anti-SARS-CoV-2 agent, compared to Ivermectin in vitro,” Dr. Ajayi adds.

The professor then adds a critical point that the two drugs may be complementary in their action on the coronavirus.

“Pharmacodynamically, the mechanisms of anti-SARS-CoV-2 action, both of molnupiravir and ivermectin are overlapping and complimentary,” he states while referring to Table 1. “Molnupiravir active metabolite (NHC-5’ Triphosphate), acts as a competitive alternative substrate for the viral RNA dependent RNA polymerase (RdRp), causing viral mutagenesis or transition mutations, which leads to viral error catastrophe
and extinction of replication,” he points out.

“There is some concern about the safety of NHC -nucleoside triphosphate, which is also mutagenic to mammalian cells,” he adds. “Ivermectin exhibits multifarious actions, ranging from binding to SARS-CoV-2 spike protein S, reducing cell entry via human ACE2 receptors, inhibition of the nuclear transport of viral proteins, which prevents interference with replication, to binding to RdRP, reducing the activity of the viral transcription -replication complex,” he continued.

“Ivermectin has additional effects on Signal Transduction Activation of Transcription (STAT-3) and inhibition of cytokine production and inflammation, which has not yet been shown for molnupiravir,” he added.

The professor nears the end of his brief analysis by concluding that the combinatory effects of the two drugs should be researched.

“As most but not all double blind studies, and meta-analyses, have shown benefits of ivermectin in COVID19 including 56% mortality reduction, and given the complimentary pharmacokinetics and pharmacodynamics of the drugs, direct head-to-head comparison of molnupiravir and ivermectin, in blinded randomized clinical trials are needed,” Dr. Ajayi argues. “A combination of molnupiravir with ivermectin putatively, may be at least additive or synergistic in effects on RdRP or cytokine release.”

“This should be further investigated in anti-SARSCoV-2 antiviral combination therapy,” Dr. Ajayi concludes.

The real question confronting patient choice about the Covid-19 pills may not be whether to take molnupiravir or ivermectin, but whether or not to take both.