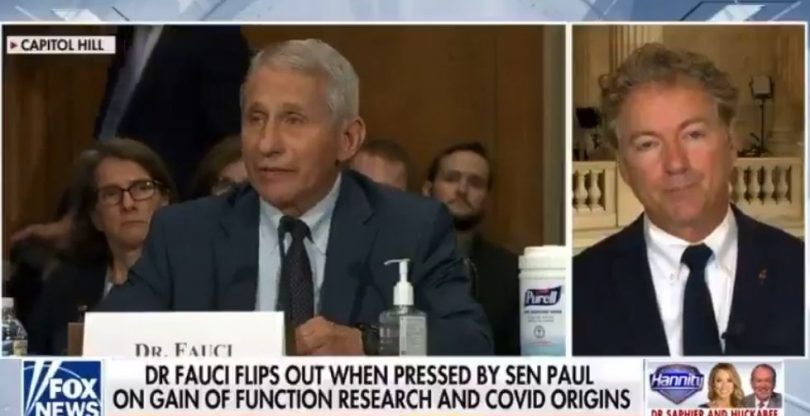 Senator Rand Paul announced he will be issuing a criminal referral request to the Department of Justice for Dr. Anthony Fauci regarding his lying to Congress.

“I will be sending a letter to the Department of Justice asking for a criminal referral, because he has lied to Congress,” Paul said.

Senator Paul’s announcement comes after Senate fireworks with Dr. Fauci over his statements regarding the NIAID’s funding of ‘gain of function’ research at the Wuhan Institute of Virology, which some believe is the source of the SARS-CoV-2 virus that caused the COVID-19 pandemic.

“Dr. Fauci, as you’re aware, it is a crime to lie to Congress,” Senator Paul began his interrogation of Fauci. “Section 1001 of the U.S. Criminal Code creates a felony and a five-year penalty for lying to Congress.”

“I’d like to ask unanimous consent, insert into the record that Wuhan virology paper entitled ‘Discovery of a rich gene pool of bat SARS-related coronaviruses’,” he continued. “Please deliver a copy of the journal article to Dr. Fauci. In this paper, Dr. Shi credits the NIH and lists the actual number of the grant that she was given by the NIH. In this paper, she took two bat Coronavirus genes, spike genes, and combined them with SARS-related backbone to create new viruses that are not found in nature. These lab-created viruses were then to show to replicate in humans.”

“These experiments combined genetic information from different coronaviruses that infect animals, but not humans, to create novel artificial viruses able to infect human cells,” Paul added. “Viruses that in nature only infect animals were manipulated in the Wuhan lab to gain the function of infecting humans. This research fits the definition of the research that the NIH said was subject to the pause in 2014-2017, a pause in funding on gain of function.”

“But the NIH failed to recognize this defines it away, and it never came under any scrutiny,” he continued. “Doctor Richard Ebright, a molecular biologist from Rutgers described this research in Wuhan as ‘The Wuhan lab used NIH funding to construct novel, chimeric SARS-related coronaviruses able to infect human cells and laboratory animals. This is high-risk research that creates new potential pandemic pathogens, potential pandemic pathogens that exist only in the lab, not in nature. This research matches — these are Dr. Ebright’s words — this research matches, indeed epitomizes, the definition of gain of function research done entirely in Wuhan, for which there was supposed to be a federal pause. Dr. Fauci, knowing that it’s a crime to lie to Congress, do you wish to retract your statement of May 11th where you claimed that the NIH never funded gain of function research in Wuhan?” he asked.

“Senator Paul, I have never lied before the Congress and I do not retract that statement,” Fauci denied.

Rep. Madison Cawthorn delivered a passionate response to Fauci’s claims in an interview on Newsmax on Tuesday night.

“I normally have a great amount of respect for the people who work here on Capitol Hill, knowing that although we have different ideas on how to accomplish it, we are all trying to work for the betterment of the American people,” Cawthorn said. “But I will tell you right now, that is not the case with Anthony Fauci.”

“He is a punk who is trying to further his own career and make himself wealthy and famous,” he continued. “But let me tell you, he deserves neither wealth nor fame, because he has destroyed countless small businesses, he has taken years of development away from young children who are missing the best parts of their entire lives.”

“He has shackled entire states and destroyed their economies,” he went on. “All because of what? Because he wants to see his face on the news?”

“He should be charged for lying to Congress,” Cawthorn added. “I thank Rand Paul for bringing it up. And I will tell you right now, Anthony Fauci does not have the best interests of the American People at his heart.

It may take more than a criminal referral request to the Department of Justice to hold Anthony Fauci truly accountable, but at least it’s a start.

Cawthorn Unloads on Fauci: ‘A Punk’ Who ‘Does Not Have the Best Interests of the American People at Heart’