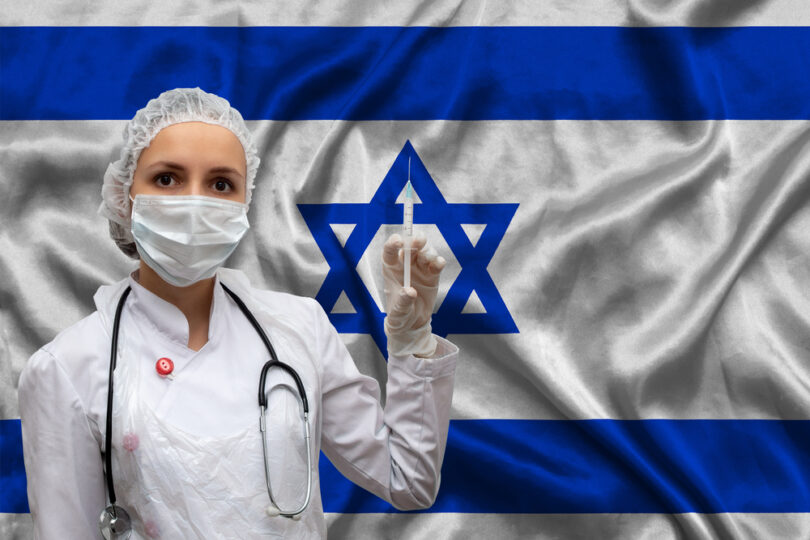 The tiny Jewish state of Israel has become like a Covid laboratory for the world’s scientists to test their mRNA shots, which have been marketed as “vaccines.”

But a fourth shot that has been introduced in the country, a second “booster,” if you will, has completely failed to slow the spread, according to a recent investigation.

“A fourth dose of the Pfizer-BioNTech vaccine was insufficient to prevent infection with the omicron variant of Covid-19, according to preliminary data from a trial in Israel released Monday,” Bloomberg reported.

“Two weeks after the start of the trial of 154 medical personnel at the Sheba Medical Center in Tel Aviv, researchers found the vaccine raised antibody levels,” the report noted.

“But that only offered a partial defense against omicron, according to Gili Regev-Yochay, the trial’s lead researcher,” the report continued. “Vaccines which were more effective against previous variants offer less protection with omicron, she said. Still, those infected in the trial had only slight symptoms or none at all.”

In early January, Bloomberg also reported on the Israeli government’s roll-out of the fourth Covid shots.

“A year after rolling out the world’s fastest coronavirus vaccination program, Israel again finds itself a global test case as it begins widely delivering fourth doses amid a surge in the omicron variant,” the report stated.

“Although the number of serious cases and deaths remain well below last year’s peak, infections have skyrocketed to record levels and could once again threaten to overwhelm hospitals if the new daily caseload reaches 50,000 as Israeli Prime Minister Naftali Bennett has warned,” the report continued. “Many of the newly infected were vaccinated at least twice.”

As previously reported, a Harvard study of 68 nations and 2,947 counties in the United States published in the European Journal of Epidemiology showed conclusively that the Covid ‘vaccines’ did not stop the spread of the Delta variant. The Omicron variant has demonstrated again that the mRNA shots are powerless to stop infections or transmission.

However, a South African study showed that even unvaccinated people infected with the Omicron variant were less likely to fall seriously ill, require hospitalization or die compared to prior COVID-19 variants, the New York Post reported.

“After adjusting for age, sex, comorbidities and subdistrict there was a substantially reduced hazard of death in wave four compared to wave three,” the study concluded.

The Omicron variant is now estimated to be 99 per cent less lethal than Delta, with an infection Fatality Rate (IFR) that could be as low as 0.0025 per cent, or the equivalent of one in 40,000.

Promisingly, a groundbreaking study showed that prior infection to the Omicron variant may confer strong and durable natural immunity to other variants, such as the Delta variant.

There may be no such thing as “fully vaccinated” for Covid-19 in Israel, however. The nation now has to grapple with the fact that its fourth shot in under a year may not prove beneficial to the general population.

“Given that that the virus is here and will continue to be here, we also need to prepare for a fourth injection,” Israel’s national coronavirus czar Salman Zarka said in September. ‘This is our life from now on, in waves.”

“Thinking about this and the waning of the vaccines and the antibodies, it seems every few months — it could be once a year or five or six months — we’ll need another shot,” he added.

The Israeli Health Minister in September was caught on hot mic confessing that there was no medical justification for Covid passports.

“There is no medical or epidemiological justification for the Covid passport, it is only intended to pressure the unvaccinated to vaccinate,” Health Minister Nitzan Horowitz said in video that was aired on Channel 12.

“Several ministers were overheard prior to a cabinet meeting on Sunday saying that some coronavirus-related restrictions are only aimed at incentivizing vaccination, rather than driving down morbidity, while lamenting that the unvaccinated are taking up hospital beds,” the Times of Israel reported on the incident.

It appears that universal vaccination is Big Pharma’s agenda, regardless of the risks or results to the general population.

The European Medicines Agency last week even issued a warning that too many boosters could weaken the immune system.

The European Union’s drug regulator is warning that too many doses of COVID-19 vaccines could eventually weaken the body’s immune system, rendering the extra shots ineffective.

Marco Cavaleri, the head of vaccine strategy for the European Medicines Agency, said that booster shots can be administered “once, or maybe twice, but it’s not something that we think should be repeated constantly.”

In late November, medical experts claimed that they were confident they could rapidly develop a vaccine specifically for the Omicron variant of Covid-19.

Since the shots do little or nothing to stop the spread of the disease, it looks like Big Pharma has a business model of putting the world on a booster subscription plan.

It’s ‘Over’: Omicron May Be About as Deadly as the Seasonal Flu, New Data Shows