Fmr. Obama Official: Internet ‘Biggest Danger’ Because It Allows Americans to ‘Believe What We Want to Believe’ 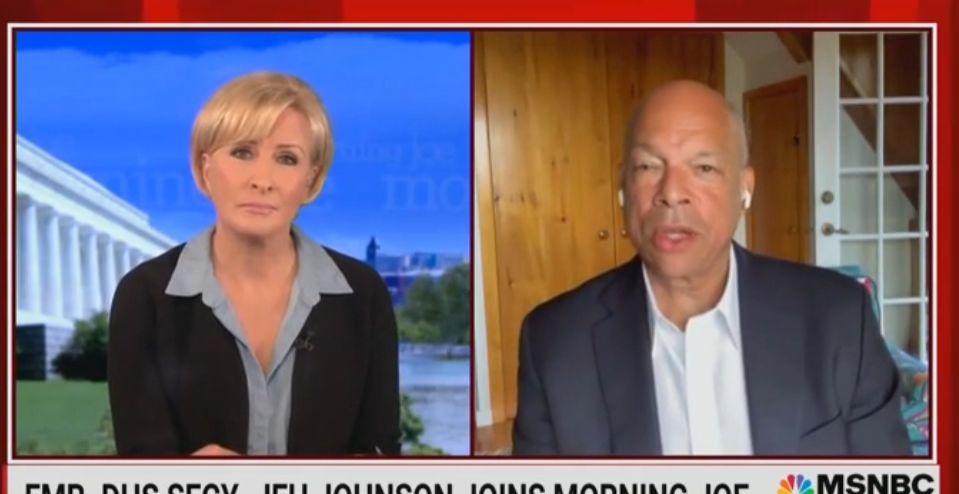 Former Secretary of the Department of Homeland Security Jeh Johnson, who served under President Obama, is calling the Internet the “biggest danger” to America. When elaborating on the reasons why, the former DHS Sec. said the quiet part out loud.

Johnson, who is now a lawyer in the private sector, appeared on MSNBC for an interview with Morning Joe.

“Mr. Secretary, you’ve had a long honorable and distinguished career of service to the United States of America,” Mike Barnicle said. “So, I’d like to ask you what do you think poses the larger danger to our country today.”

“We have Covid-19 and the Delta variant, people not getting a vaccine,” he said. “We also have one of two major political parties in denial, a certain percentage of those Republicans in denial of the fact that Joseph R. Biden is the legitimately elected president of the United States.”

“And we have had a member of that party, the former president, actually engaged in trying to perpetrate a coup against the existing federal government,” Barnicle said, propagating a big lie about the 2020 election.

“So my question to you is, given that we have a vaccine for the virus, and there seems to be no vaccine for the illness that has seized the Republican Party, what is the bigger danger we face as a country?” Barnicle asked.

“On the other hand the Internet enables us as Americans to believe what we want to believe,” he added.

“We go to sources — and you know this problem — we go to sources for information that do no more than validate our own prejudices our biases and so forth, which is how you end up in situations and surveys that show that a very, very large percentage of Americans, of Republicans believe that the election was stolen,” Johnson added.

“One sixth of America apparently ascribes to the QAnon theory, which is frightening to me, and there are a lot of Americans out there who believe that somehow this vaccine which is saving lives, is dangerous,” he continued. “Which is how we end up in situations like the one we’re in now where we’re seeing a spike.”

This is a quite chilling statement. The essence of freedom and democracy is citizens deciding what to believe in within a civil society with open discourse with our fellow citizens. Obviously, Jeh Johnson is an enemy of such core values of democratic society as free speech, freedom of association, and freedom of conscience. You could sum it up as freedom, period.

“I looked at numbers on your show a minute ago, and it’s actually worse now than it was a year ago when we were still in lockdown,” he added. “This is a surge of the unvaccinated. It didn’t have to be this way if we were all science and fact based in making our decisions about our personal lives. So underlying all of what you cited, Mike, is the problem we’re having right now with how Americans get their information and make their decisions about about what to do.”

“So, it sounds to me Mr. Secretary like you’re saying we’re no closer to saving our democracy from the perils of phases until we deal with platforms that promulgate this information,” Mike Brzezinski added.

Fact-checking the numerous lies and untruths in just this one MSNBC hit is beyond the span of one article, and indeed, many full-length books. We’ll pick one lie to demonstrate why Johnson’s argument is wrong-headed and dangerous. The “surge of the unvaccinated” lie.

Setting aside that the Delta variant is so much less deadly than the original strain that COVID mortality rates remain flat weeks after the initial spike, there are a substantial number of new COVID cases being driven by vaccinated Americans.

In one of the worst managed states in the U.S. for COVID, Massachusetts, nearly 75% of COVID-19 infections during a July outbreak in one town happened to people who were previously vaccinated, the CDC said in a study released Friday.

“In July 2021, following multiple large public events in a Barnstable County, Massachusetts, town, 469 COVID-19 cases were identified among Massachusetts residents who had traveled to the town during July 3–17; 346 (74%) occurred in fully vaccinated persons,” the CDC report said. “Testing identified the Delta variant in 90% of specimens from 133 patients. Cycle threshold values were similar among specimens from patients who were fully vaccinated and those who were not.”

If America were beholden to the likes of MSNBC for its information, as well as its like-minded left-wing cohorts throughout the rest of the media, Americans would never get the whole story. No one outlet, no one party, no one authority can have a monopoly on the truth.

The solution to the problem of misinformation on social media is not to silence arguments and criticism among free citizens. It is to move to an education system that actually educates citizens to be critical thinkers and astute consumers of information.

A Third Police Officer Who Responded to the Jan. 6 Capitol Riot Has Now Died of ‘Suicide,’ Metro Police Report