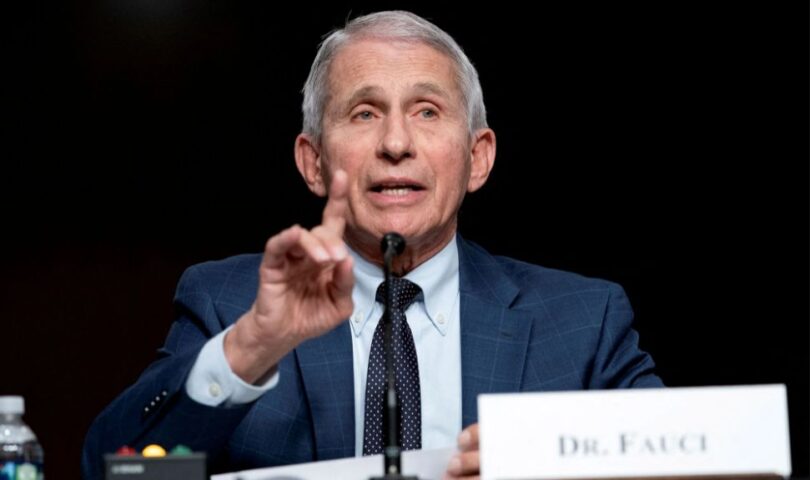 Dr. Anthony Fauci, the once-ubiquitous face of the Covid pandemic, has suddenly disappeared from the public limelight. The polarizing figure has gone from the frontlines of the government’s crusade to push Covid vaccines back to the shadows of the murky world of public health agencies and Big Pharma corporations.

So, when Adam Andrzejewski, the co-founder of OpentheBooks.com, began poking around in Dr. Fauci’s financials for a Forbes piece, the retaliation came swiftly. He explained his perspective in a recent Substack post.

“Dr. Anthony Fauci is the most highly compensated federal employee and the most visible,” Andrzejewski said. “So, it’s incumbent upon all of us to give him oversight.”

“In 2011, I founded a national transparency organization called OpenTheBooks.com,” he explained. “Last year, we filed 47,000 Freedom of Information Act requests, the most in American history. We successfully captured and displayed online $12 trillion of federal, state, and local spending.”

“Over the past 14 months – since January 2021 – we investigated Dr. Fauci’s financials by filing FOIA requests,” Andrzejewski added. “When I published our original reporting at Forbes, here is what happened.”

“The National Institutes of Health, Fauci’s employer, loaded an artillery shell in their big gun and fired it at the C-suite at Forbes,” he went on. “Quickly, Forbes folded and my column was terminated.”

Then, he explains how something changed the moment he took on America’s purported ‘top doc.’

“In 2020, I published 36 investigations at Forbes and the editors chose 26 for special showcase on the platform, a designation called ‘Editors’ Pick’,” he noted.

“The first piece I published in 2021 broke national news that Dr. Fauci was the most highly compensated federal employee and even out-earned the president, four-star generals, and 4.3 million colleagues,” he added. “That piece alone has 900,000+ views.”

“However, none of the 56 articles I published during 2021-2022 received an ‘Editors’ Pick’ designation,” he noted. “Something changed at Forbes after I wrote about Dr. Anthony Fauci.”

Andrzejewski then recounts how he was finally able to obtain a closer look at Fauci’s financials.

“On January 12, Sen. Marshall wrote a demand letter to NIH for Dr. Fauci’s unredacted ethics/financial disclosures,” he said. “In the letter, Marshall included footnotes that referenced my Fauci-Forbes columns.”

“On Friday, January 14 at 5:00 pm ET, NIH produced Fauci’s unredacted ethics/financial disclosures from 2019 and 2020 subject to Sen. Marshall’s demand letter. The 2020 disclosures had never been released and only heavily redacted 2019 disclosures were previously released,” he went on.

“Working through the night, I dug through the 178 pages of disclosure and published the breaking investigation at Forbes on Saturday, January 15 at 3:03 pm ET, Disclosures Show Dr. Fauci’s Household Made $1.7 Million In 2020, Including Income, Royalties, Travel Perks And Investment Gains.”

This was the top-line findings from his investigation:

But these findings apparently caused a headache at NIH and there is evidence they retaliated against the media watchdog seeking transparency.

“On Sunday, January 16 at 12:43 pm ET, six top communications, government relations, and public affairs officers at NIH wrote a ‘corrections’ email to Randall Lane, the chief content officer and editor of Forbes and me,” he said.

“As you can see, the email did not contain any substantial corrections.” The screenshot of the email is provided below: 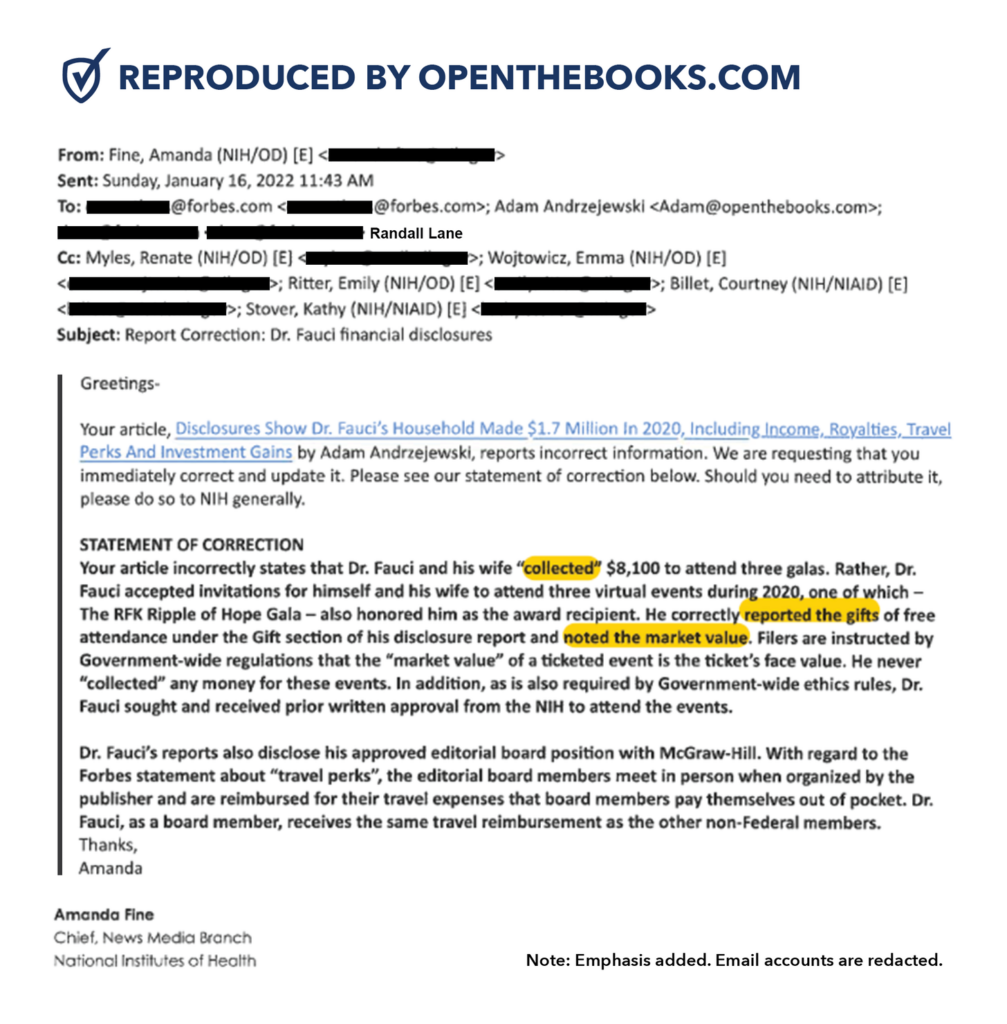 Then came the news: He was no longer welcome at Forbes.

“Of course, the real purpose of the NIH’s email wasn’t to correct my work,” he argued. “Two directors, two bureau chiefs, and two top PR officers didn’t send an email to the Forbes’ chief on a Sunday morning because they wanted to correct the record about Fauci’s travel reimbursements.”

“They sent that email to subliminally send a message: We don’t like Andrzejewski’s oversight work, and we want you to do something about it,” he said. “Unfortunately, Forbes folded quickly.”

“Within 24 hours of the NIH email to Randall Lane, my regular Forbes editor called and announced new rules,” he added. “Forbes barred me from writing about Fauci and mandated pre-approval for all future topics.”

“Then, Forbes went silent and terminated my column roughly 10 days later on January 28,” Andrzejewski continued. “On the day Forbes cancelled me, the editors bent the knee. A new piece on Fauci published: ‘Fauci’s Portrait Will Soon Hang In The Smithsonian’.”

“Of course, the article was designated an Editors’ Pick,” he noted.

Dr. Marty Makary, a Johns Hopkins professor, recently pointed out the story of why Andrzejewski was suddenly canceled by Forbes..

How fact-finding Dr. Fauci resulted in cancellation, by @open_the_books https://t.co/kW9nX7Gum8

Dr. Makary himself has been at the forefront of researching the actual science regarding the Covid-19 pandemic, rather than the Big Pharma-backed government talking points.

This has also put the Johns Hopkins professor in the crosshairs of the media. Dr. Makary has published ground-breaking research on Natural Immunity that showed 99% of people who had prior infections to Covid-19 had antibodies that did not reduce after at least 650 days.

This is the kind of real science that can hurt corporate profits and undermine radical political agendas. These are the kinds of media stories and scientific research that is no longer welcome in corporate America.