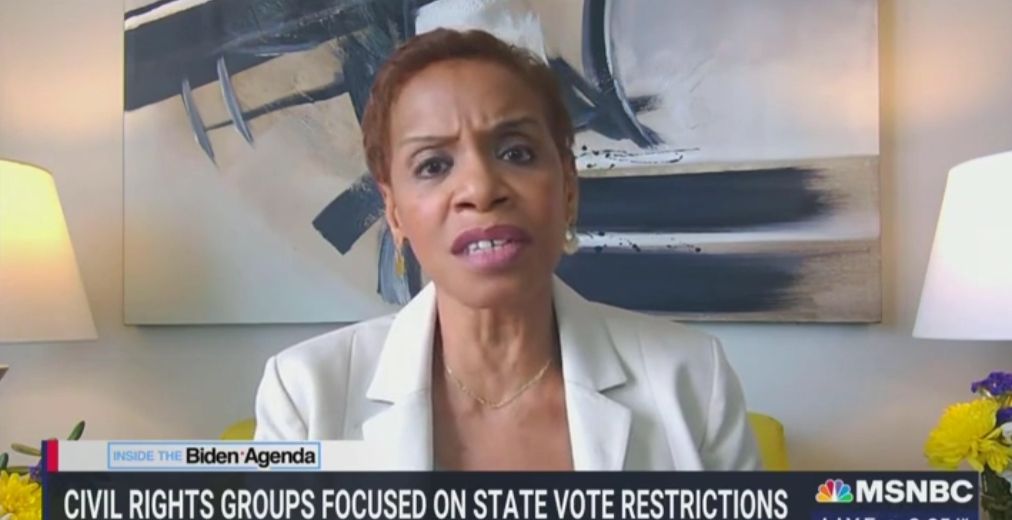 “Well, and — and Donna Edwards, this political stalemate on voting rights legislation is because congressional Republicans, you know, blocked it, and the reality is reforming the filibuster doesn’t seem like an actual possibility right now with the votes in the Senate. I mean, what — what can the president actually do here?” Kasie Hunt asked.

“Well, you know, for — for Democrats, I mean, it is both a moral crisis of, you know, black voters, minority voters being really shut out of — you know, of the process, but it also means that it’s a political crisis for Democrats,” Edwards argued.

“These rules, these restrictive rules that have been put in place in the state are such that it could really cost Democrats seats in the House and the Senate,” she admitted, adding, I mean, “That is how serious it is.”

“And so I think that there’s going to have to be a level of urgency raised by the White House, by the president, by the vice president around the country, both an inside and outside strategy that is going to lift up the need to do voting rights, not in a year, not down the line, but right now,” she continued.” And I don’t know that I’ve seen that urgency yet.”

“I hope I will see it coming out of the White House from this meeting today, but you know, some of these Democrats just have to get onboard,” she continued “And you know, Republicans are not going to come onboard, we know that, and so let’s stop existing in that fantasy world and get down to the business of passing legislation that is going to make it easier and not more difficult for voters to cast their votes come the following elections.”

There is no right to make voting “easier.” There is a duty on the part of states to ensure that only adult American citizens who are the residents of that state vote in their elections. That is the way Americans can have confidence that the elections were free, fair and legitimate.

The Supreme Court in early July dealt a blow to the efforts to overturn the states’ election integrity laws in the courts, which would effectively restore the elections to the pre-pandemic emergency procedures, while strengthening voter IDs in some cases.

Unfortunately, the Democrats seem to oppose such legitimacy, transparency, and accountability when it comes to United States elections. Instead, they perpetuate the narrative that ensuring the identity and residency of voters leads to ‘disenfranchisement.’

This was underscored on Thursday when Vice President Kamala Harris announced that the DNC will be funding a so-called ‘voting rights initiative’ to expand the ‘I Will Vote’ campaign to the tune of $25 million.