Full, Uncensored Video of Will Smith Assaulting Chris Rock at the Oscars is Worse Than the Live Version

The 94th Academy Awards would normally be a time when America tunes out Hollywood actors congratulating themselves profusely for playing pretend for a living. (And making millions while doing it).

These Oscars would have been no different, if not for a bizarre violent incident that happened on stage when legendary comedian Chris Rock decided to tell a relatively standard joke about Will Smith’s wife Jada Pinkett Smith. Watch:

This was Will Smith’s reaction a moment after Rock told the joke. 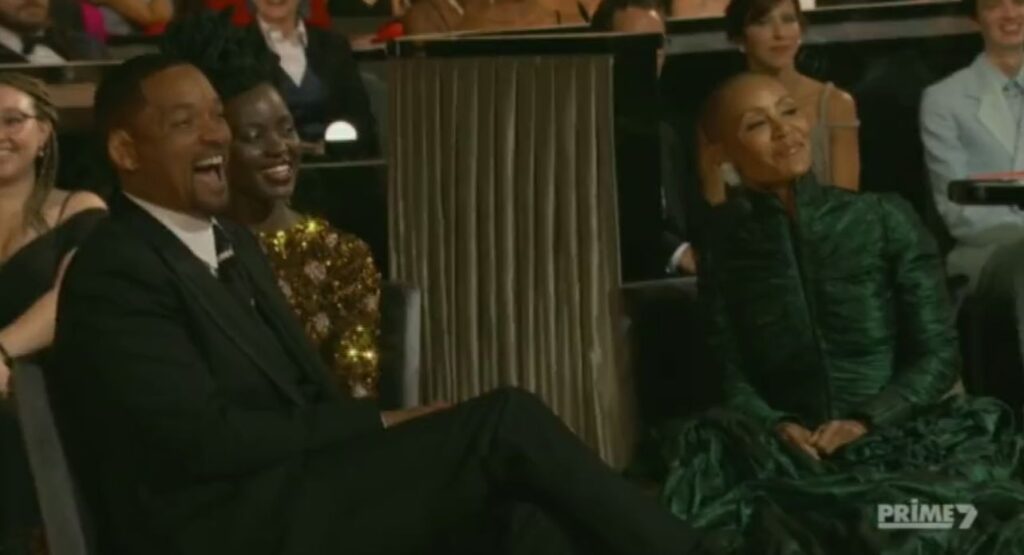 Jada Pinkett Smith then became visibly offended; she is dealing with a hair loss condition known as alopecia.

Will Smith, upon seeing his wife unhappy with the joke, charged the stage. He then slapped Chris Rock across the face. Many accused the two of staging the scene. But here is the assault in slow-motion.

Now, the backstory of this incident is layered. Will Smith and Jada Pinkett Smith have attracted a media spotlight on their “open marriage.” Buzzfeed reported on their relationship in late 2021:

The Hollywood couple — who were married in 1997 and share two children, Jaden, 23, and Willow, 20 — made headlines last July after they addressed rumors of infidelity during their marriage on Jada’s candid talk show, Red Table Talk.

Now, in an interview with GQ as their latest cover star, the 53-year-old actor has addressed last year’s discussion and offered further insight into the period of nonmonogamy in his and Jada’s marriage.

In the surprisingly candid exchange, Will confirmed to the interviewer that both he and Jada have, with mutual agreement, engaged in sexual relationships outside of their marriage.

In the aftermath of the strange incident, Will Smith actually won Best Actor for his role in King Richard. As he gave his acceptance speech, visibly upset, he brought up God and the Devil, apologized to everyone but Chris Rock, and then expressed his hope that he would be invited back.

Instead of being shunned by the Academy, Will Smith was actually comforted in the aftermath.

The comforting by Tyler Perry, Denzel & Bradley Cooper is so sweet! 😂😆

Meanwhile Chris Rock is screaming about BLM back stage 😏 pic.twitter.com/8jXIBol5fg

Chris Rock declined to press charges against Will Smith with the LAPD.

“LAPD investigative entities are aware of an incident between two individuals during the Academy Awards program. The incident involved one individual slapping another,” a statement obtained by ITK.

“The individual involved has declined to file a police report,” the LAPD added.

The Academy condemned the violence at the Awards show.

The Academy does not condone violence of any form.

Tonight we are delighted to celebrate our 94th Academy Awards winners, who deserve this moment of recognition from their peers and movie lovers around the world.

Rock’s friend David Spade couldn’t believe what Smith got so heated about.

Blue check conservatives were mixed on what to make of one of the ugliest incidents in Oscars history.

Will Smith single-handedly ended the war in Ukraine.

I’d rather get slapped in the nuts by a mountain gorilla than watch the Oscars.

Almost too many layers to sift through in this slap moment.
– Will and Jada “stuff”
– Will laughing then overcompensating
– Will feeling untethered to slap another man on live TV
– Will slapping instead of punching
– Unhinged yelling
– Winning the award
– Rambling non-apology

Steve, you should know me, and that's on you.

He obviously was not trying to insult the man's wife, he was trying to make a joke, and he was assaulted. If Smith walked onstage and said "I CHALLENGE YOU TO A DUEL," that would have been cool. https://t.co/ychmLlScXp

Never be the guy who takes a joke worse than the other guy takes a punch. Chris Rock rules.

Will Smith assaulted a man and then a few minutes later received a standing ovation from the leftist Hollywood elite.

No matter where people stand on Will Smith’s assault of Chris Rock, it certainly is an odd thing for a man to get so angry about a relatively tame joke from a comedian at the Oscars when he has admitted to letting men sleep with his wife.

Let’s hope Will Smith gets the help he deserves, because his shouting and assault at the Oscars is a sign that the man needs help. Maybe his acceptance speech’s reference to God is a good start, but he needs to issue an actual public apology to Chris Rock.