General Milley Turns on Pelosi, Biden & Blinken in Desperate Bid to Save His Skin 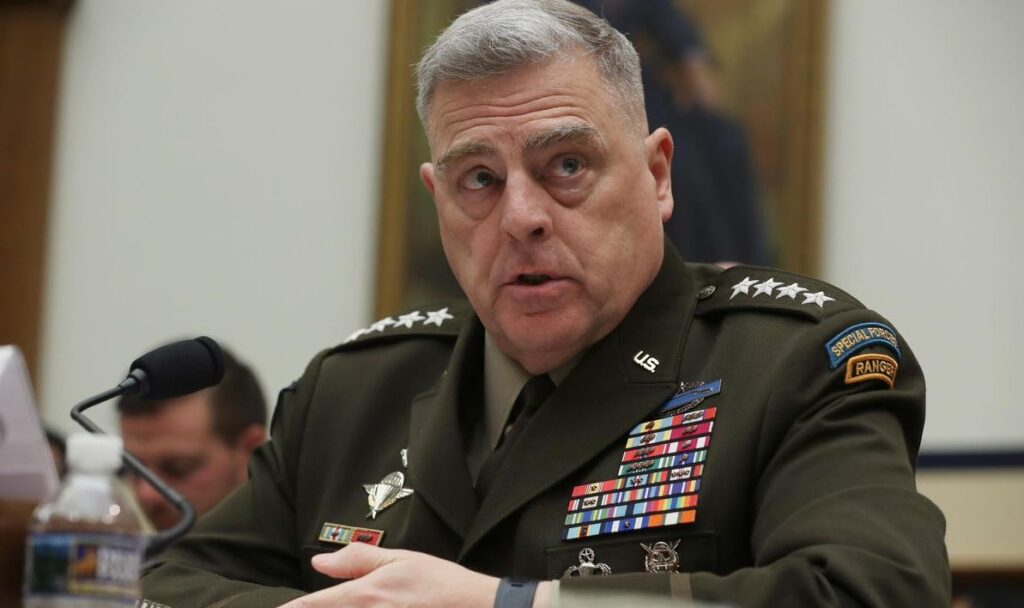 General Mark Milley has made numerous statements in Senate testimony over the past few days that directly contradict the Biden administration. Specifically, the nation’s highest-ranking general has refused the accounts given by President Joe Biden, Speaker of the House Nancy Pelosi, and Secretary of State Antony Blinken over some of the biggest controversies facing the administration.

Amidst the furor of January 6, a storyline developed that showed just how desperate the Democratic Party’s leadership had become to undermine President Donald Trump’s constitutionally delegated authority as Commander-in-Chief. Speaker Nancy Pelosi in January announced that she had reached out to General Mark Milley to preemptively intervene in the potential of President Donald Trump launching a nuclear war for inexplicable reasons.

“This morning, I spoke to the Chairman of the Joint Chiefs of Staff Mark Milley to discuss available precautions for preventing an unstable president from initiating military hostilities or accessing the launch codes and ordering a nuclear strike,” Pelosi said in a letter to colleagues. “The situation of this unhinged President could not be more dangerous, and we must do everything that we can to protect the American people from his unbalanced assault on our country and our democracy.”

The Washington Post’s Bob Woodward and Robert Costa in their forthcoming book “Peril” discuss the episode:

Milley told Pelosi that there were “a lot of checks in the system” to prevent Trump from going rogue, the book said.

“He’s crazy and what he did yesterday is further evidence of his craziness,” Pelosi added, referring to the deadly Capitol riot.

According to the book, Milley responded, “I agree with you on everything.”

On Wednesday, General Milley addressed the issue in a matter-of-fact manner suggesting that he did everything exactly by the book.

“Speaker of the House Pelosi called me to inquire about the president’s ability to launch nuclear weapons,” he confirmed. “I sought to assure her that nuclear launch is governed by a very specific and deliberate process. She was concerned and made various personal references characterizing the president. I explained to her the president is the sole nuclear launch authority and he doesn’t launch them alone and that I am not qualified to determine the mental health of the President of the United States.”

“There are processes, protocols and procedures in place and I repeatedly assured her there was no chance of an illegal, unauthorized or accidental launch,” he added. “By presidential directive, and Secretary of Defense directive, the chairman is part of the process to ensure the president is fully informed when determining the use of the world’s deadliest weapons. By law, I’m not in the chain of command and I know that. However, by presidential directive and DOD instruction, I am in the chain of communication to fulfill my legal, statutory role as the president’s primary military advisor.”

“At no time was I trying to change or influence the process, usurp authority or insert myself in the chain-of-command,” he added in a seven-page unclassified memo to the Senate committee.

The general’s remarks, however, underscore just how inappropriately the Speaker of the House had behaved by even suggesting that he could intervene without constitutional authorization.

General Mark Milley, Chairman of the Joint Chiefs of Staff, also made two phone calls to the Communist Chinese to allegedly reassure them that they would not be attacked without advanced warning, according to the book “Peril.”

Milley has subsequently refuted those claims as well by providing an account that does not seem to square with the record.

The general even went so far as to claim that Trump officials knew about his call to his communist Chinese counterpart.

“I know, I am certain that President Trump did not intend to attack the Chinese,” General Milley testified to the Senate Armed Services Committee on Tuesday.

“It was my directed responsibility by the secretary to convey that intent to the Chinese,” Milley said.

General Milley also refuted claims that his numerous questionable actions, such as his calls to Communist China, and even in regards to his calls to the former Afghan president to mislead the American people on the Taliban, did not warrant any calls for ‘treason’ or any criticism of his loyalty to the country.

“My loyalty to this nation, its people, and the Constitution hasn’t changed and will never change as long as I have a breath to give,” he said. “I firmly believe in civilian control of the military as a bedrock principle essential to this republic and I am committed to ensuring the military stays clear of domestic politics.”

General Milley also batted away direct calls for him to resign at the Senate hearing.

Gen. Milley: "I serve at the pleasure of the president, Mr. Jackson." pic.twitter.com/6qouJdm3Zy

“I serve at the pleasure of the president,” Milley said.

As Becker News earlier reported, General Milley had told fellow high-ranking military and Pentagon officials that “he will not be fired nor will he quit,” indicating that he had the full backing of the White House.

However, the situation could be complicated by General Milley calling out President Biden for his disastrous decision not to leave 2,500 troops in Afghanistan to oversee an evacuation and to secure military equipment. And by shifting blame to Speaker Nancy Pelosi over the nuclear chain-of-command debacle, as well as Secretary of State Blinken for the botched evacuation, his hot seat must be getting even hotter.

General Mark Milley is obviously willing to say and do anything to save his skin. He has sent out the message loud-and-clear: ‘If I’m going down, I’m taking everyone in the Biden administration with me.’

Top Generals Point Fingers at Biden for Afghanistan Debacle, Even as Military Troops Can Be Jailed for Criticism