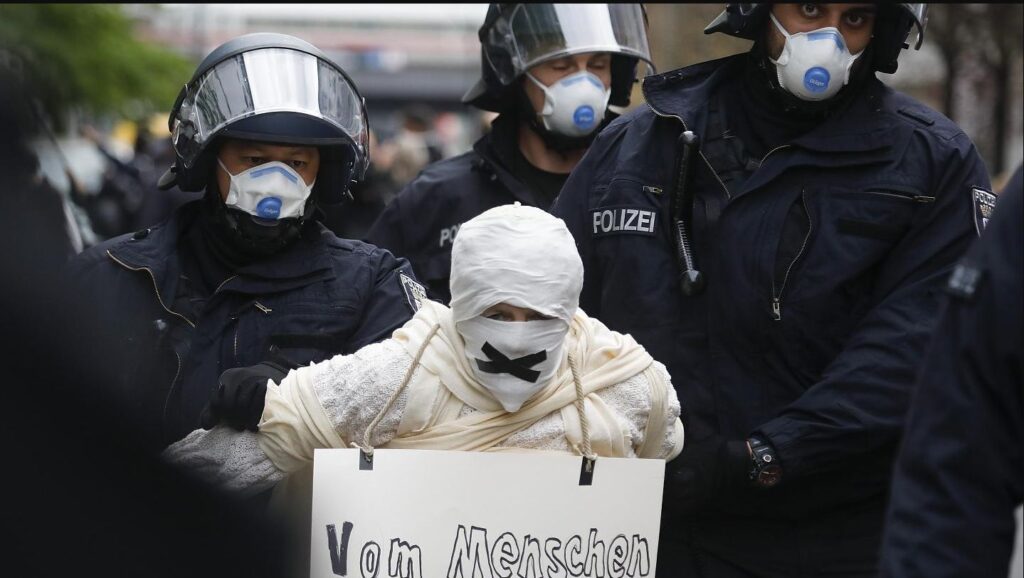 Germany will be enforcing a nationwide lockdown for the ‘unvaccinated,’ while pointing to surging coronavirus cases. The German government is effectively implementing a biomedical police state that selectively violates human rights for one class of citizens, while ignoring the science that demonstrates that the ‘vaccinated’ spread the variants at a significant rate.

“Germany is poised to clamp down on people who aren’t vaccinated against Covid-19 and drastically curtail social contacts to ease pressure on increasingly stretched hospitals,” Bloomberg reported.

“In one of her final acts as chancellor, Angela Merkel will hold talks with Germany’s 16 regional premiers later on Thursday at which they’re expected to agree on new curbs including allowing only people who are vaccinated or recovered into restaurants, theaters and non-essential stores,” the report continued.

“According to a draft agreement prepared by Merkel’s office, there will also be tighter contact restrictions for non-vaccinated people, nightclubs will be closed in places with high infection rates and there will be strict limits on the number of spectators at large public events,” Bloomberg added.

“The important thing is that this is virtually a lockdown for the unvaccinated,” outgoing Health Minister Jens Spahn said Thursday. “The more than 12 million adults who aren’t inoculated is what is creating a challenge for the health system.”

According to Reuters, Germany has administered “at least 124,401,062 doses of COVID vaccines so far. Assuming every person needs 2 doses, that’s enough to have vaccinated about 74.8% of the country’s population.” 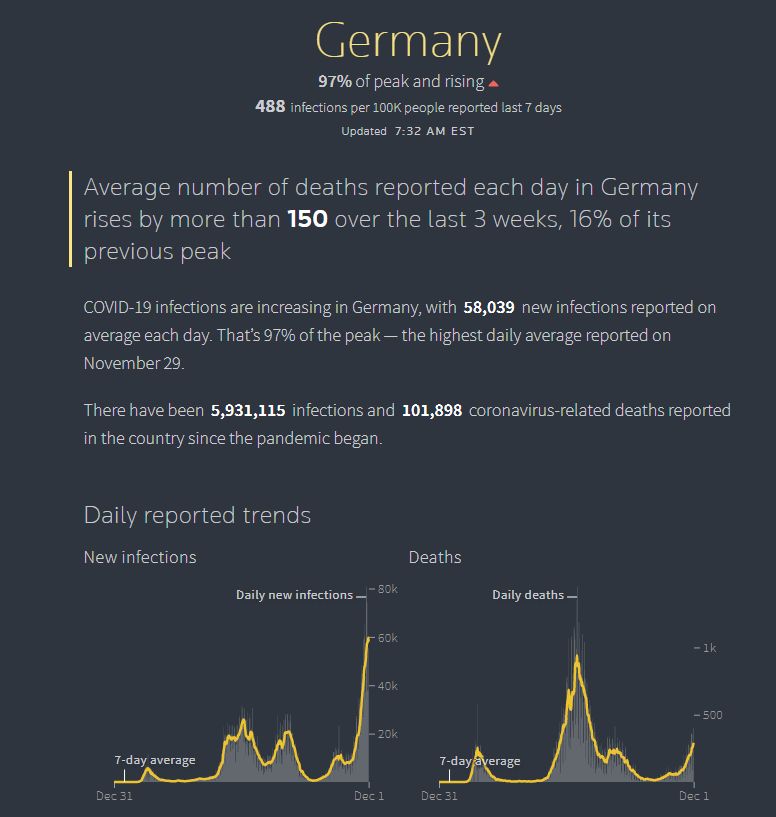 This is the latest in an ongoing series of lockdowns in Germany, and all of them failed to stop the nation from experiencing its “fourth wave” of Covid-19. On November 2, 2020 the nation imposed a lockdown, which failed to stop the spike in infections. The nation then implemented a “hard lockdown” on December 15 and imposed multiple lockdown extensions after that date.

The second wave nonethless peaked in January 2021. In March, there was an alpha variant outbreak that drove yet a third wave, which was followed by a modification of the Infection Protection Act in April to increase the powers of the federal government. In early July, Germany experienced a Delta variant spike that led to another lockdown and subsequent major protests.

In mid-October, infections began to increase again, leading to a “fourth wave,” along with intensive care unit hospitalizations. In November, Health Minister Jens Spahn declared there was a “massive pandemic of the unvaccinated.” That has led to the authoritarian nationwide lockdown announced by Merkel on Thursday.

The German publication DW provided snapshots of the public sentiment about mandatory vaccinations.

Today, the question of mandatory COVID-19 vaccinations has turned into another emotional debate dividing the country.

Some people have come out in favor of requiring jabs , while others are strictly against it. Several recent polls show a more or less clear majority of people supporting mandatory vaccinations: Der Spiegel newsmagazine reported 72%, YouGov found 69% and the ARD public broadcaster said 57% of people in Germany support mandatory vaccinations. A survey by the tabloid Bild newspaper, however, said 70% are against the measure.

But regardless of which set of statistics is correct, now is absolutely the wrong time for a debate on mandatory vaccinations.

“We need another lockdown,” DW’s “fact checker” concluded. There has nonetheless been mass uprisings against lockdowns and vaccination mandates by a portion of the German populace. One of the earliest was in April 2020, when over 100 were arrested near Rosa Luxemburg Square in central Berlin.

“Protesters shouted ‘I want my life back’ and held up signs with slogans such as ‘Protect constitutional rights’, ‘Freedom isn’t everything but without freedom, everything is nothing’, and ‘Daddy, what is a kiss?'” Reuters reported.

Beyond the cold facts are hard-to-watch videos of Germans attempting to stand up to the authoritarian regime.

Germany~Protesters are out late night~midweek in protest against Tyrannical Vaccine Mandates and Unvaccinated Lockdown Legislation…pic.twitter.com/BuZKAPhCFv

A massive protest tonight in #Frankfurt #Germany against compulsory vaxx and the threat of lockdowns. pic.twitter.com/i63d9JNIZS

A protest last night in Germany last night against looming the “get the jab or go to jail” laws. pic.twitter.com/HHYWClklY4

Another protest in Germany tonight against mandates. pic.twitter.com/eCAEj2XDKF

While Germany is creating a biomedical apartheid state, its nearly 75% ‘vaccination’ rate is considered more than sufficient to stop pandemics, provided that the inoculation is being carried out with actual vaccines. Furthemore, 150 million-190 million Americans have had prior infections and thus “natural immunity,” which is significant protection against Covid that is comparable to vaccinated immunity.

According to Statista, the majority of ‘vaccinations’ in Germany are with the Pfizer-BioNTech prophylactic therapeutic. 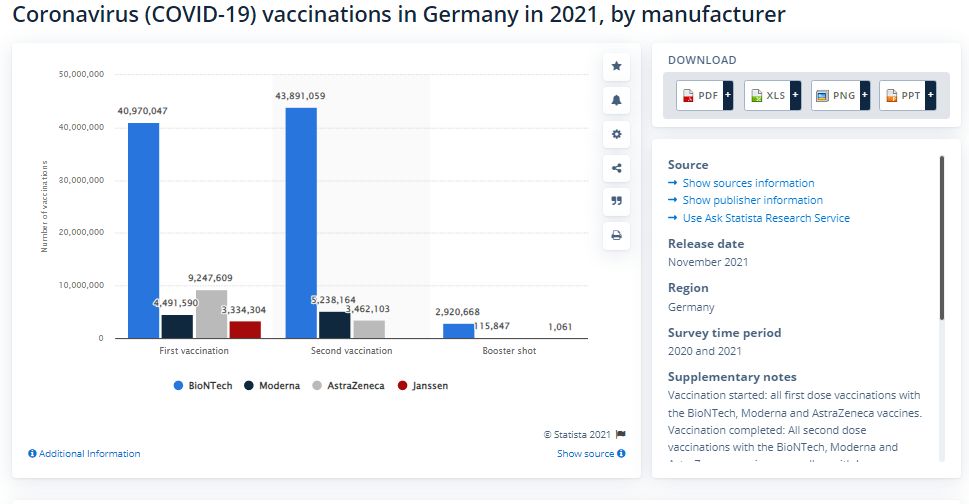 The Pfizer-BioNTech vaccine is already under scrutiny for the waning efficacy and for its significant transmission of the Covid variants, including Delta and Omicron. The government of Botswana’s Covid-19 Task Force earlier stated that the first four known transmitters of the Omicron variant were all “fully vaccinated.”

This week, the first doctor to treat a patient with the Omicron variant of SARS-CoV-2 warned there is “nothing” known so far about the new variant that warrants the “extreme action” many governments are taking.

It appears that many once-free nations, like Germany, Canada, and Australia, aren’t waiting for the facts to come out. They are intent on imposing their extreme actions regardless of the “science.”