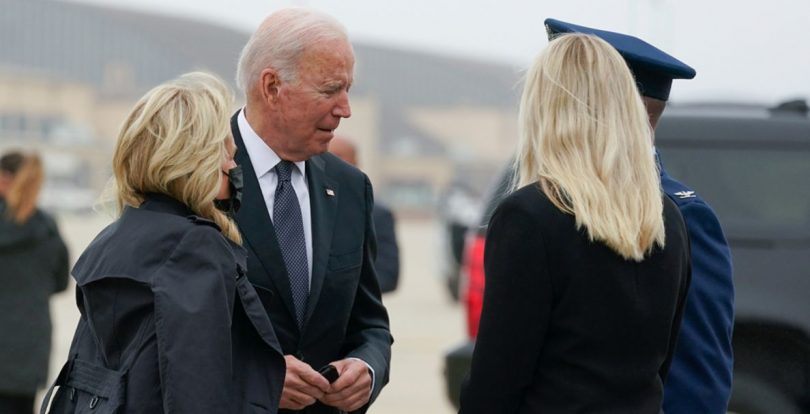 President Joe Biden’s disastrous mismanagement of the abrupt military withdrawal from Afghanistan after nearly two decades of war extends well beyond putting troops and civilians in harm’s way. The U.S. president’s documented history of disrespect towards troops and Gold Star Families is another level of unfitness for the role of Commander-in-Chief.

On Sunday, the president was at Dover Air Force Base with the families of the fallen, where his poor reception of the slain soldiers’ grieving loved ones reverberated across America. Multiple parents still in mourning provided scathing testimonials about the president’s misconduct. While anger about the loss of a loved one is a normal part of the grieving process, the president obviously struck a nerve with the Gold Star Family members by repeatedly checking his watch during the solemn ceremony.

The father of slain soldier Darrin Taylor Hoover, Jr. refused to meet with Biden at the Dover ‘dignified transfer’ ceremony, but he noted the president’s ‘disrespect’ from afar.

Mark Schmitz, the father of Marine Lance Corporal Jared Schmitz, backed up Hoover’s account during a primetime interview with “Hannity.”

One anguished mother, named Shana Chappell, mother of Marine Lance Cpl. Kareem Nikou, also expressed shock and outrage at the Commander-in-Chief over his behavior at their private meeting. In a viral Facebook post that preceded Chappell being locked out of her account, she accused the president of ‘rolling his f***ing eyes’ during their meeting.

“Cheyenne McCollum, one of the sisters of Marine Lance Cpl. Rylee McCollum, said she met with Biden alongside McCollum’s pregnant widow and that the president would not look at the family in the eye and spent the three-minute conversation talking about Beau, who served in Iraq with the U.S. Army and died in 2015 from brain cancer,” Fox News reported.

“I was able to stand about 15 seconds of his fake, scripted apology and I had to walk away,” Cheyenne told “Fox & Friends.”

Roice McCollum, another sister, also refused to meet with the president. She accused him of showing a “total disregard to the loss of our Marine.”

“You can’t f— up as bad as he did and say you’re sorry,” Roice told The Washington Post. “This did not need to happen, and every life is on his hands.”

One of the more unsettling accounts of Biden’s callousness and self-absorption towards Gold Star Family members comes not from the military withdrawal, but from November 2016. It also regards a parent who lost a son in Afghanistan, this time in a suicide bombing attack at Bagram Air Base. The attack killed four people and wounded 17 others.

“It was a horrible conversation, it was a horrible experience,” Mike Iubelt, the father of the fallen Army Pfc. Tyler Iubelt, 20, told the Washington Examiner. “I left there feeling worse than I did before he walked through the doors.”

The Washington Examiner relates that then Vice President Biden then made a passing distasteful remark to the widow of a fallen soldier that had family members expressing disbelief.

“He told my daughter-in-law … that she was too pretty for this to happen to her,” Mike Iubelt recalled.

“It’s probably a good thing that he was surrounded by Secret Service, probably for both of us, because I’d probably be locked up in jail right now,” he added.

“It wasn’t the right time, but heck, I make mistakes all the time,” Charlotte Loquasto, a Gold Star mother, said of Biden’s remark. “It was not comforting, it was creepy.”

Biden’s mistreatment of military families extends beyond that of Gold Star parents and siblings. His flippant remarks show a track record of taking military members’ service and sacrifice for granted.

There’s a saying in your line of work — that the U.S. Coast Guard is the “hard nucleus about which the Navy forms in time of war.” (Applause.)

In May 2021, Biden was so upset that the Coast Guard graduates didn’t appreciate a line that he swiped from former Vice President Dick Cheney, and subsequently botched, that he chided them.

“I can only assume that you will enjoy educating your family about how the Coast Guard is, quote, ‘the hard nucleus around the Navy forms in times of war’,” Biden said, followed by the sound of crickets.

“You are… you are a really dull class,” he said. “Now, come on, man. Is the sun getting to you? I would think you would have an opportunity when I say that about the Navy, to clap—”

Coast Guard graduates apparently didn’t want to clap for the same president who had once told military troops to “clap for that, you stupid bastards” in a March 2016 speech. Watch:

It is abundantly clear President Biden is unfit to lead the greatest fighting force in the world. It is apparent not only from his inexcusable decision to withdraw military troops ahead of evacuating American civilians and verified Afghan allies, but from his track record of disrespect for our service members and their families. It is for these reasons and others a majority of Americans now want Biden to resign.