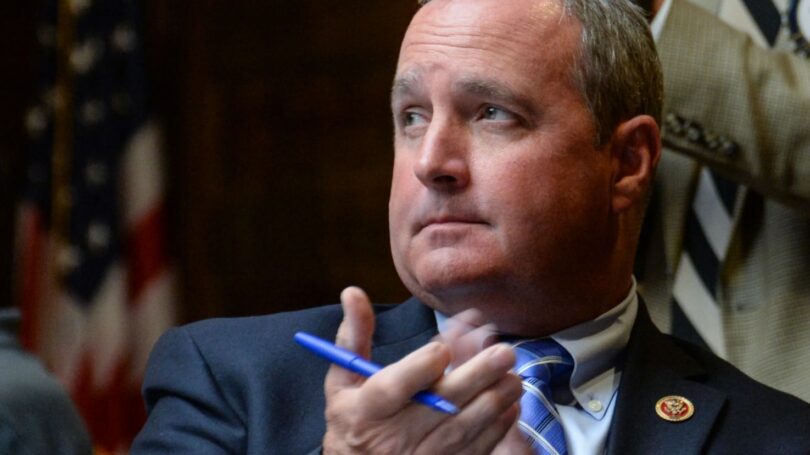 ‘Let’s Go Brandon!’ is triggering libs at an increasing rate. The naughty euphemism initially caught fire after a ‘journalist’ attempted to hide the fact NASCAR fans were yelling ‘F*** Joe Biden’ when Brandon Brown won his race at Talladega. Now that the phrase has caught on nationwide, it’s become a force of nature. And radical leftists, who appear to have been born without a sense of humor, are not pleased.

So, a House Republican obviously fed up with Speaker Pelosi’s nonsensical floor mask mandate decided to add a little color to Monday’s proceedings by wearing a ‘Let’s Go Brandon’ mask. You can see it in all it’s Democrat-triggering glory below:

Spotted at House votes: GOP Rep. Jeff Duncan of SC wearing a mask with a phrase that Republicans are using in place of F*** Joe Biden. pic.twitter.com/0rTSz6LwNV

That would be Rep. Jeff Duncan (R-SC) sticking it to the ‘man’ with one of the funnier masks to be snuck onto the House floor.

South Carolina @RepJeffDuncan just walked off the floor with a “Let’s Go Brandon” mask on.

Of course, the whole mask-wearing thing is just for show anyway, and it is not based on science (you can see how loosely it fits, making it useless) – so why not put on a show?

Duncan even made sure to point out that he was indeeed masked, so therefore he should be entirely in the clear.

“You’re not only ugly on the outside – you’re ugly on the inside too!! Congrats,” one commenter raged.

“You think it’s a joke to behave like a child?” another asked rhetorically. “Much less your disrespectful mask! You are an embarrassment to SC and all her citizens.”

“Congress is the seat of democracy, not talk radio,” another scolded. “This is juvenile and unbecoming of a US Congressman. You need to show some respect for our country.”

“Such a devout Christian. WWJD? Why, he’d slyly insult someone he disagrees with of course. It’s in the Bible. Look it up,” another remarked sarcastically.

“Not a serious representative, or Christian,” another intoned.

A Twitter commenter on Olivia Beaver’s photo of Rep. Duncan seems to sum up the left’s faux outrage nicely.

Disgusting. The disrespect they screamed about for four years.

“Disgusting. The disrespect they screamed about for four years,” a commenter said. But a Twitter user named Ar15ONA was quick with the receipts.

“Hmm, this is you, right?” the user said, pointing to much more vulgar language used about Donald Trump.

But if they didn’t like Duncan’s mask, they definitely didn’t like it when Rep. Bill Posey (R-FL) recently used the verboten phrase “Let’s Go Brandon” on the House floor.

“People are understandably frustrated. Actually, they are very angry, and they are not going to sit back and take it much longer,” Rep. Posey said. “Instead of the bogus Build Back Better plan and reconciliation plan, you know what they want? They want the Democrats to help put America back where they found it and leave it the hell alone. Let’s go, Brandon.”

Ted Cruz also shared a video of himself saying it, and last week Fox News’ Kennedy did a mock “Let’s Go Brandon” chant during a segment, Mediaite noted.

“The House floor is typically policed quite closely for breaches in rhetoric,” Andragna said. “Talking about the president in any vulgar way would, of course, attract attention — but this phrase seemed to fly under the radar.”

But Democrats are unhappy with the Republicans’ rhetorical pushback against a president who routinely ignores the role of Congress actually deciding the nation’s laws. But beyond the random commenters, there were some Democratic Congress members who outright used epithets to describe Donald Trump for four years when he was president.

If the Democrats don’t want President Biden to be disrespected with language that is much tamer than the vile epithets they whip out at a moment’s notice whenever their political opposition disagrees with them, there is a recourse. First of all, President Biden can stop referring to Americans who believe in the nation’s founding value of ‘freedom’ as if they are murderers out to kill people. He can stop referring to people who dissent from his useless Covid mandates as “Neanderthals.’

Furthermore, Biden can try something completely new to earn more respect: He can respect the rights of American citizens and his Oath of Office to defend the U.S. Constitution. If he keeps failing to do that, a “Let’s Go Brandon” chant is the least of his worries.