Gov. Ron DeSantis Responds to Biden’s Vaccine Mandate with a Brutal Reality Check: There is No ‘One-Person Rule in this Country’ 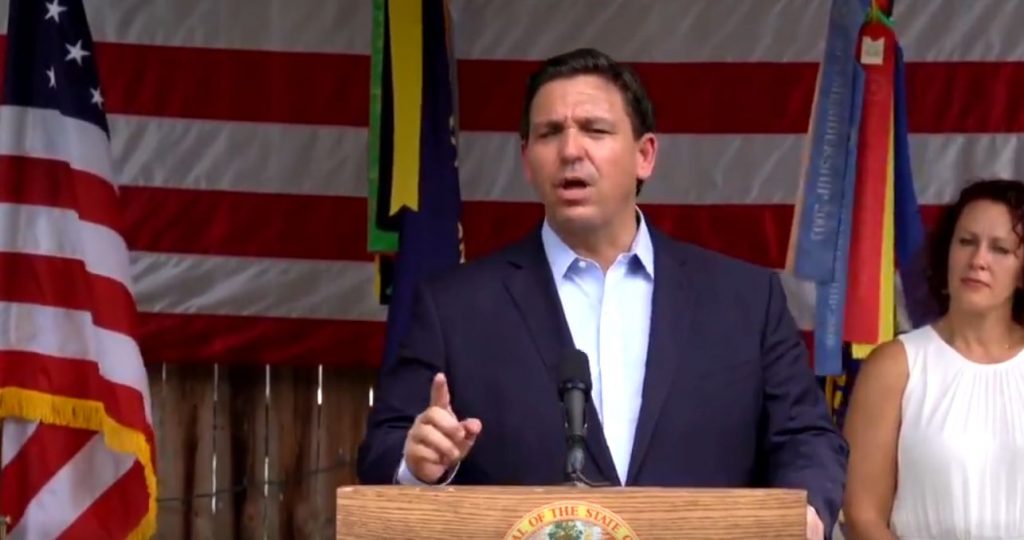 Florida Governor Ron DeSantis didn’t mince words with the Biden administration over the federal vaccine mandate that it issued by executive order on Thursday.

When asked to respond to the president apparently directing comments at him during his Thursday address, DeSantis was blunt. Watch:

“I would just say, generally, when you are taking action that is unconstitutional that threatens the jobs of people in my state, many, many thousands of jobs, I am standing for them, we are going to protect their jobs against federal overreach,” the governor said.

“This is a guy who criticizes the State of Florida for protecting parents’ rights,” he added. “He says school boards should be able to eliminate parents’ rights and force five-year-old kids to wear masks all day. That’s what he thinks is appropriate for government.”

“And yet, here he comes from Washington D.C., instituting and unprecedented mandate,” he continued. “When even his own people in the past have acknowledged it is not constitutional. That’s not leadership.”

“I think the problem I have with Joe Biden, more than anything, this guy doesn’t take responsibility for anything,” DeSantis said. “He is always trying to blame other people. Blame other states.”

“This is a guy who promised when he ran for president that he would shut down the virus,” he added. “If you look now, there is 300% more cases in this country today than a year ago when we had no vaccines at all.”

“So, his policies are not working, he is doubling down on things that are going to be very destructive for the livelihoods of many, many Americans,” he said. “And obviously, are going to be destructive to our constitutional system and the rule of law.”

“And these are times, if you believe in the Constitution, you’ve got to stand up,” DeSantis went on. The governor then made the point that Americans with natural immunity could be put out of a job when they have immunity that is just as strong as a vaccinated individual’s.

“It’s not based on science,” DeSantis went on. “He’s saying he’s losing patience with people?… We don’t live with a one-person rule in this country,” DeSantis said. “We live in a Constitutional system, where people’s rights are respected.”

“It’s totally counter-productive and I think it will ultimately lose in court,” he added. “But before that, there needs to be action taken to protect the people of our state and hopefully of the entire United States.”

Governor DeSantis was speaking in Florida after he had scored a legal victory on Friday. An appellate court stayed a lower court judge’s attempt to overrule the governor on the state’s school mask mandate ban.

“Gov. Ron DeSantis’ ban on mask mandates in schools is in effect again after an appellate court reinstated the stay on a judge’s ruling that blocked the executive order,” WCTV reported.

“The First District Court of Appeal issued the stay again on Judge John Cooper’s ruling a little after 12:30 p.m. Friday,” the report noted.

“This means the ban is back in effect and will likely remain in effect for the remainder of the school semester since it typically takes months for the appellate court to issue a final ruling,” the report added.

“The stay should have been left in place pending appellate review. Accordingly, we grant the appellants’ motion, quash the trial court’s order vacating the automatic stay, and reinstate the stay required by Florida Rule of Appellate Procedure 9.310(b),” the order says.

Governor DeSantis spokesperson Christina Pushaw posted the news on Friday that the state’s ban on masking schoolchildren was ‘back in effect.’

BREAKING: 1st District Court of Appeals just granted the State of Florida's request to reinstate the stay — meaning, the rule requiring ALL Florida school districts to protect parents' rights to make choices about masking kids is BACK in effect!

“1st District Court of Appeals just granted the State of Florida’s request to reinstate the stay — meaning, the rule requiring ALL Florida school districts to protect parents’ rights to make choices about masking kids is BACK in effect!” posted

On Friday, Governor DeSantis weighed in on the legal victory.

No surprise here – the 1st DCA has restored the right of parents to make the best decisions for their children.

I will continue to fight for parents’ rights.

“No surprise here – the 1st DCA has restored the right of parents to make the best decisions for their children,” the governor said. “I will continue to fight for parents’ rights.”

It appears that Governor Ron DeSantis is fighting for all Americans’ rights. He joins at least seventeen governors who have spoken out in opposition to Biden’s federal vaccine mandate.