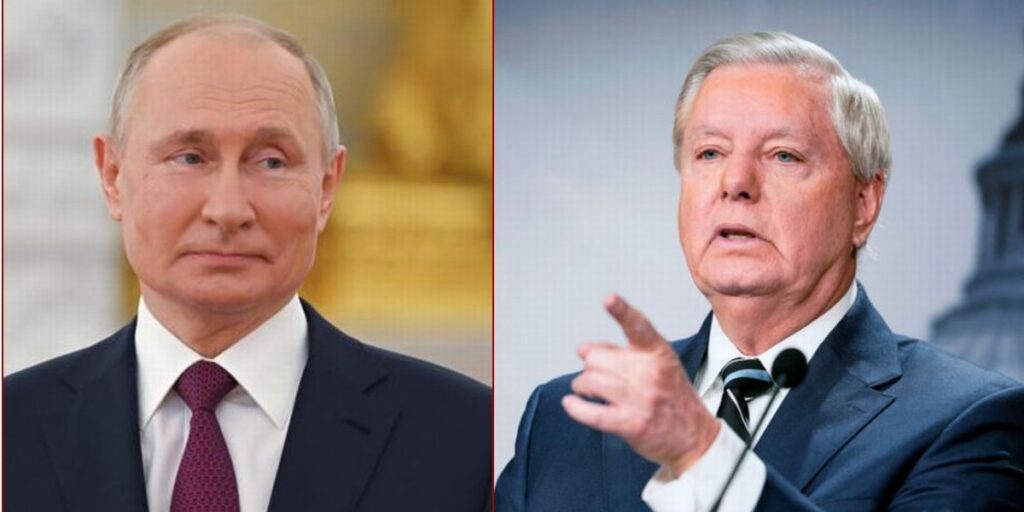 Senator Lindsey Graham doubled down on his call for the Russian people to assassinate President Vladimir Putin with an exortation to take him out ‘by any means possible.’ Watch:

“Yeah, the Russian people are not our enemy,” Graham said on Fox & Friends. “I’m convinced it’s a one-man problem surrounded by a few people.”

“So, at the end of the day, Brian, how does this end?” he asked. “We’re not going in on the ground in Ukraine. We know if he attacks a NATO nation, we’ll have World War III. I don’t think he’ll do that.”

“The way this will end is if he gets charged with a war crime, Putin and his cronies, and one day we nab him when he leaves Russia,” he went on. “But the best way for this to end is to have an Eliot Ness or a Wyatt Earp in Russia, the Russian Spring so to speak, where people rise up and take him down. Because if he continues to be their leader, then he will make you complicit with war crimes.”

“You’re a good people,” he went on. “You will never have a future. You will be isolated from the world and you’ll leave in abject poverty. So I’m hoping someone in Russia will understand that he is destroying Russia and you need to take this guy out by any means possible.”

Senator Lindsey Graham had appeared on “Hannity” on Thursday night and issued the challenge for the Russian people to assassinate Putin.

“How does this end?” he asked. “Somebody in Russia has to step up to the plate. Is there a Brutus in Russia? Is there a more successful Colonel Stauffenberg in the Russian military?”

“The only way this ends, my friend, is for somebody in Russia to take this guy out,” he continued. “You would be doing your country a great service and the world a great service.”

Graham also repeated his plea to the Russian people on Twitter.

The only people who can fix this are the Russian people.

Easy to say, hard to do.

“The only people who can fix this are the Russian people,” he added. “Easy to say, hard to do. Unless you want to live in darkness for the rest of your life, be isolated from the rest of the world in abject poverty, and live in darkness you need to step up to the plate.”

Putin’s press secretary responded to Graham’s call for the Russian leader’s assassination as an “hysterical escalation of Russophobia.”

“These days, not everyone manages to maintain sobriety, I would even say sanity, and many lose their minds,” the Russian press secretary said.

Dmitry Peskov, the Russian press secretary, is one of a number of Putin associates who have been targeted for sanctions by the Biden administration, including visa bans.

Graham’s call for the Russian president be assassinated was met with bipartisan condemnation. Even Rep. Ilhan Omar advocated for U.S. officials to be more responsible with their language. It’s that bad.