He ‘Aimed to Kill’: Assassin Who Killed Former Japanese PM Shinzo Abe Says Why He Did It

Former Japanese Prime Minister Shinzo Abe was shot and killed at a stump speech by an assassin two days ahead of a national election.

Abe was shot on Thursday during a speech while campaigning in Nara prefecture. He was pronounced dead by the head of Nara Medical University at 5:03 p.m. local time.

Graphic images in the aftermath of Abe’s shooting surfaced on social media.

The video shows the man firing a weapon that left a large puff of smoke; it is believed to be a “homemade,” and potentially, a 3D printed gun.

Tetsuya Yamagami, 41, from Nara city was arrested on suspicion of shooting Shinzo Abe. He told police that he was dissatisfied with his leadership and that he “aimed to kill.”

An image of Yamagami surfaced on Japanese media. The man also paradoxically insisted that he did not have a “grudge” against Abe over their political differences.

“It’s not a grudge against the political beliefs of former Prime Minister Abe,” the Nara prefectural police quoted Yamagami as saying.

Mainichi News interviewed investigators who said the man “claimed to have been targeting a religious leader who was not present at the event,” as reported by Yahoo News. “The investigators also told the outlet that the man was making repetitive, nonsensical statements.”

However, Japan’s Public broadcaster NHK reported that Tetsuya Yamagami targeted Shinzo Abe with the intention of killing him.

Prime Minister Fumio Kishida, who was campaigning in Yamagata Prefecture and returned to Tokyo by helicopter, said that the assailant’s exact motive is not fully known.

The suspect reportedly worked for the Japan Maritime Self-Defense Force for three years until about 2005.

The longest-serving prime minister in Japanese history, Abe twice held the nation’s highest political post: Once from 2006 to 2007 and again from 2012 to 2020.

Abe was the first head of government to meet with former President Donald Trump after the 2016 election. He was a noted anti-communist and considered to be a close ally of the United States.

Donald Trump gave a statement of support for Abe and his family after learning that the former Japanese PM had been shot. 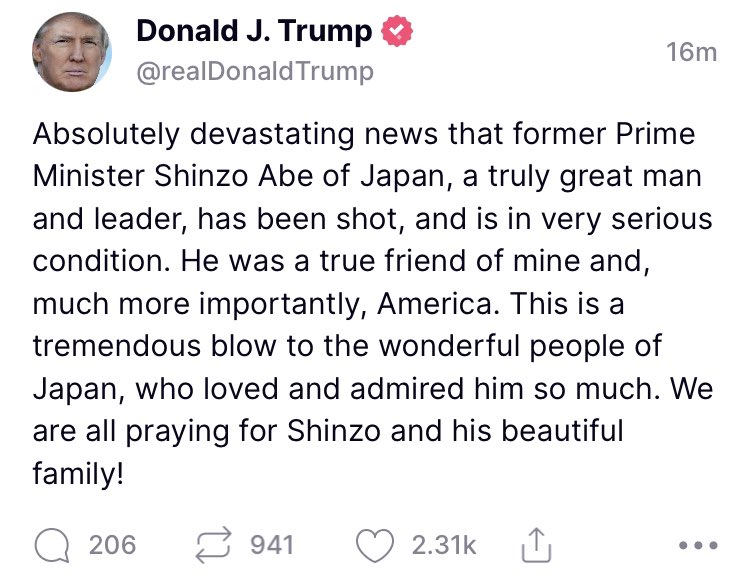 “Absolutely devastating news that former Prime Minister Shinzo Abe of Japan, a truly great man and leader, has been shot, and is in very serious condition,” Trump wrote on Truth. “He was a true friend of mine and, much more importantly, America. This is a tremendous blow to the wonderful people of Japan, who loved and admired him so much. We are all praying for Shinzo and his beautiful family!”

In February 2022, the former PM called for the United States to abandon strategic ambiguity over Taiwan and more vocally pledge to defend the nation.

“It is time to abandon this ambiguity strategy. The people of Taiwan share our universal values, so I think the U.S. should firmly abandon its ambiguity,” he said.

Chinese social media burst into praise for the assassin following the shooting and wished for Abe’s death.

While Abe has been considered to be an ‘anti-communist,’ he was an outspoken proponent of global initiatives, such as the UN’s 2030 sustainability agenda.

“The new Agenda has laid five key elements, called the five ‘P’s; which are People, Planet, Prosperity, Peace, and Partnership at its core,” Abe said at the United Nations in 2015. “It has also forged an ambitious plan of action in various fields including women, health, education, disaster risk reduction, and quality growth.”

“With these core components, all of which Japan has emphasized, the new Agenda will lead our efforts in order to ultimately eradicate poverty from the earth and to transform the world into a sustainable planet by 2030,” he said.

Russia’s foreign ministry called the deadly attack on Shinzo Abe an “act of terrorism.” While there were statements given by former President Donald Trump and former Vice President Michael Pence, an official statement is yet to be issued from the Biden White House as of time of publication.