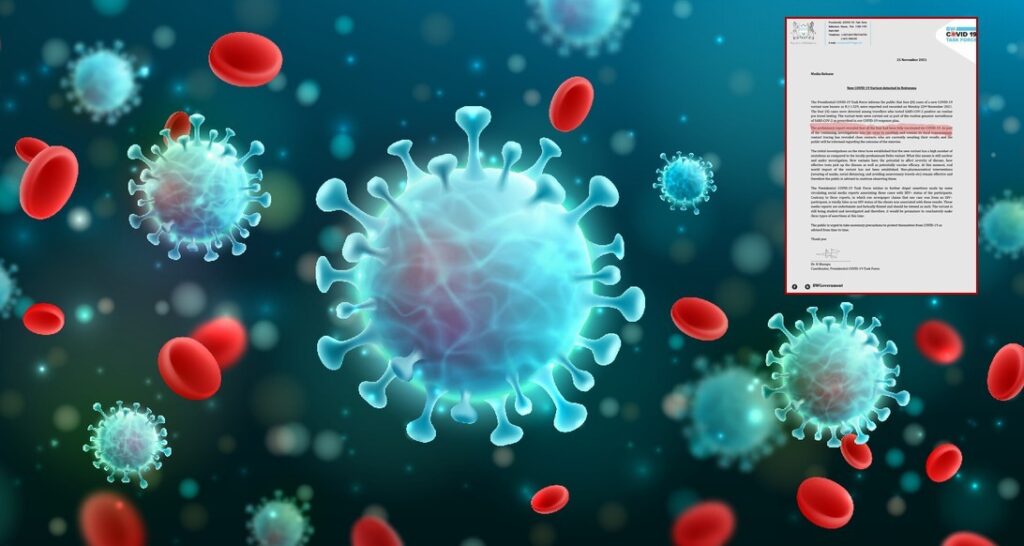 The Omicron variant of Covid-19, also known as the B.1.1.529 strain, is splashed all over the international headlines. But while many wonder about the origins of this new virus, here is something we do know: The first four reported Omicron variant cases were all from patients who were “fully vaccinated.”

The Omicron variant was first identified in Botswana earlier in November, but it is believed to be fueling a present spike in cases in South Africa. Also known as the B.1.1.529 variant, it has been found in Botswana, South Africa and Hong Kong so far.

“There’s a lot we don’t understand about this variant,” Richard Lessells, an infectious-diseases physician at the University of KwaZulu-Natal in Durban, South Africa, said at a press briefing. “The mutation profile gives us concern, but now we need to do the work to understand the significance of this variant and what it means for the response to the pandemic.”

“We’re flying at warp speed,” Penny Moore, a virologist at the University of the Witwatersrand in Johannesburg, South Africa, told Nature. Moore added that “at this stage it’s too early to tell anything” about the anecdotal reports of reinfections and of cases in vaccinated individuals.

The government of Botswana’s Covid-19 Task Force, however, has revealed critical information about the origins of the Omicron variant that is not yet being widely reported in the U.S. media. 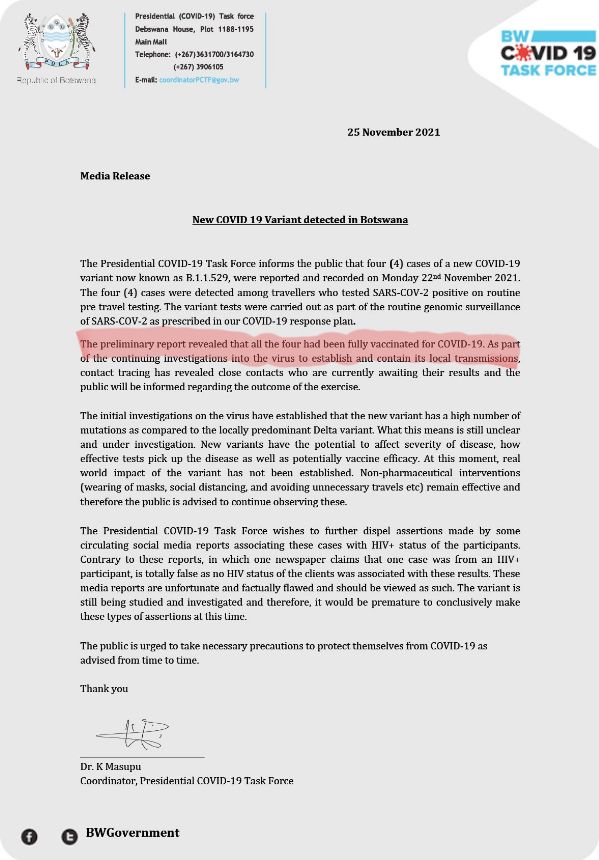 “The Presidential Covid-19 Task Force informs the public that four (4) cases of a new Covid-19 variant now known as B.1.1.529, were reported and recorded on Monday 22nd November 2021,” Botswana’s task force coordinator Dr.  K. Masupu said. “The four (4) cases were detected among travellers who tested SARS-COV-2 positive on routine pre-travel testing. The variant tests were carried out as part of the routine genomic surveillance of SARS-COV-2 as prescribed in our COVID-19 response plan.”

“The preliminary report revealed that all the four had been fully vaccinated for COVID-19,” the report continued. “As part of the continuing investigations into the virus to establish and contain its local transmissions, contact tracing has revealed close contacts who are currently awaiting their results and the public will be informed regarding the outcome of the exercise.”

“The initial investigations on the virus have established that the new variant has a high number of mutations as compared to the locally predominant Delta variant,” the task force added. “What this means is still unclear and under investigation. New variants have the potential to affect severity of disease, how effective tests pick up the disease as well as potentially vaccine efficacy.”

The government also dispelled rumors that the variant had originated with HIV positive patients. The New York Times provided more background on the origins of the Omicron variant among human patients.

“Omicron first came to light in Botswana, where researchers at the Botswana Harvard H.I.V. Reference Laboratory in Gaborone sequenced the genes of coronaviruses from positive test samples,” the Times reported. “They found some samples sharing about 50 mutations not found in such a combination before. So far, six people have tested positive for Omicron in Botswana, according to an international database of variants.”

“Around the same time, researchers in South Africa stumbled across Omicron in a cluster of cases in the province of Gauteng,” the report continued. “As of Friday, they have listed 58 Omicron samples on the variant database. But at a news conference on Thursday, Tulio de Oliveira, the director of the Centre for Epidemic Response & Innovation in South Africa, said that ‘close to two or three hundred’ genetic sequences of Omicron cases would be released in the next few days.”

“This variant did surprise us,” Dr. de Oliveira said at the news conference. “But the full significance is still uncertain.”

The New York Times did not report that the first patients reported to be Covid positive with the Omicron variant were all “fully vaccinated.” It only held out the possibility that the vaccinated “perhaps” might spread it.

“The W.H.O. said the new version, named Omicron, carries a number of genetic mutations that may allow it to spread quickly, perhaps even among the vaccinated,” the Times noted.

Dr. Geert Vanden Bossche, a leading critic of an universal vaccination agenda that ignores natural immunity, is that the mRNA therapeutics being marketed as ‘vaccines’ may help fuel variants. He holds a DVM from the University of Ghent, Belgium, and a PhD degree in Virology from the University of Hohenheim, Germany. He has worked for several vaccine companies: GSK Biologicals, Novartis Vaccines, Solvay Biologicals. He has contributed to vaccine R&D as well as late vaccine development.

Vanden Bossche was hired by the Bill & Melinda Gates Foundation’s Global Health Discovery team in Seattle (USA) as a Senior Program Officer, before leaving to work with the Global Alliance for Vaccines and Immunization (GAVI) in Geneva as Senior Ebola Program Manager. He was also a part of the German Center for Infection Research in Cologne as Head of the Vaccine Development Office.

“As of the early days of the mass vaccination campaigns, at least a few experts have been warning against the catastrophic impact such a program could have on global and individual health,” Vanden Bossche writes in a blog post. “Mass vaccination in the middle of a pandemic is prone to promoting selection and adaptation of immune escape variants that are featured by increasing infectiousness and resistance to spike protein (S)-directed antibodies (Abs), thereby diminishing protection in vaccinees and threatening the unvaccinated.”

“This already explains why the WHO’s mass vaccination program is not only unable to generate herd immunity (HI) but even leads to substantial erosion of the population’s immune protective capacity,” he goes on. “As the ongoing universal mass vaccination program will soon promote dominant propagation of highly infectious, neutralization escape mutants (i.e., so-called ‘S Ab-resistant variants’), naturally acquired, or vaccinal neutralizing Abs, will, indeed, no longer offer any protection to immunized individuals whereas high infectious pressure will continue to suppress the innate immune defense system of the nonvaccinated.”

“This is to say that every further increase in vaccine coverage rates will further contribute to forcing the virus into resistance to neutralizing, S-specific Abs,” he continued. “Increased viral infectivity, combined with evasion from antiviral immunity, will inevitably result in an additional toll taken on human health and human lives.”

“Immediate action needs, therefore, to be taken in order to dramatically reduce viral infectivity rates and to prevent selected immune escape variants from rapidly spreading through the entire population, whether vaccinated or not,” he adds. “This first critical step can only be achieved by calling an immediate halt to the mass vaccination program and replacing it by widespread use of antiviral chemoprophylactics while dedicating massive public health resources to scaling early multidrug treatments of Covid-19 disease.”

While the U.S. media is publicly deliberating about whether or not the Omicron variant can be spread by the ‘fully vaccinated,’ the truth is that they already know it can. The Covid-19 tracing information that is already available shows that the first Omicron variant patients were ‘fully vaccinated,’ yet they refuse to report this in an honest and transparent fashion. It is obvious that the corporate media’s willingness to report the truth is a lot weaker than their loyalty to failed political agendas and addiction to skyhigh profits.