Hillary Clinton Calls for More Big Tech Censorship: ‘There Must Be a Reckoning’ for Conspiracy Theorists 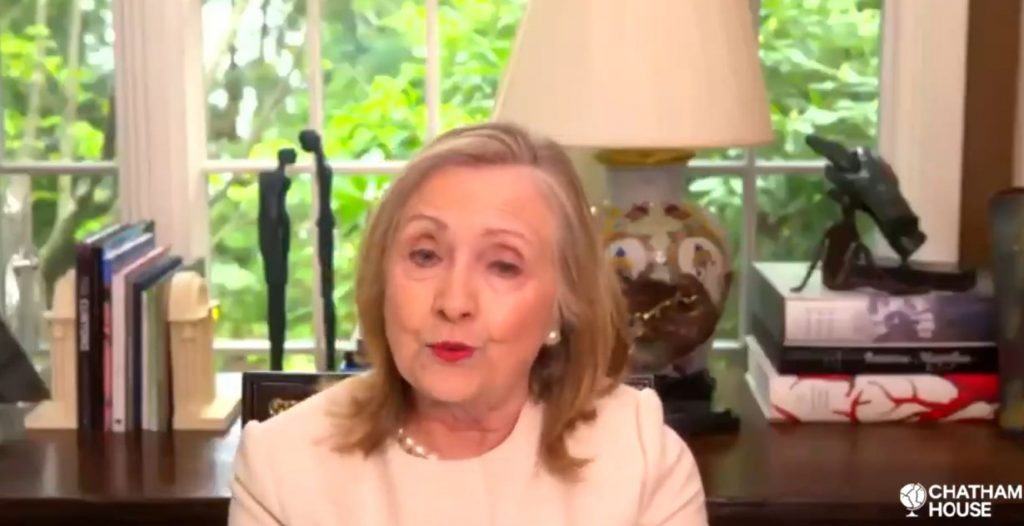 “There must be a reckoning by the tech companies for the role that they play in undermining the information ecosystem that is absolutely essential for the functioning of any democracy,” Hillary Clinton said.  “If you get to a point — and we are, if not there, very close to it —where you cannot have agreement on facts, on evidence, on truth, how does a democracy make decisions?” she asked.

And tech companies have made algorithm-driven conspiracy rabbit holes a feature of our information ecosystem.

There needs to be a reckoning. https://t.co/K4DXAAjVi5pic.twitter.com/ijtb2PLps4

“And what we’ve got in the tech world on social media platforms is an algorithm-driven, conspiracy rabbit hole that people are enticed to go down and then addicted, because it is like watching constant car crashes,” she continued. “You cannot turn away. And as someone who has been accused of practically everything you could possibly imagine, I know how powerful this is, I mean, outrageous falsehoods which fuel a sense of alienation.”

“And yet the algorithm-driven, advertising, profiting social media platforms find it I guess very difficult to break themselves of that addiction so, in fact, they don’t,” she continued. “And it’s going to be up to governments, and I would even hope some global rules, but let’s start with governments to try to rein in the disinformation on the social media platforms. It certainly plays to Russia’s interests, but also to other malign actors.”

It should be noted that what Hillary Clinton is calling for is government control of “misinformation” online, which would potentially block the American public from receiving  sensitive information that officials deem harmful to political interests. This is not the same as Florida Governor Ron DeSantis supporting a bill that would fine social media giants for interfering in U.S. elections by censoring political candidates.

Hillary Clinton, the presidential candidate in the 2016 election, famously refused to recognize the legitimacy of Donald Trump’s election on numerous occasions, despite conceding that she officially lost. Clinton had also played a key role pushing the Russia collusion conspiracy theory that undermined President Trump’s legitimacy before the riots at his 2017 inauguration and throughout his administration. Most egregiously, the Clinton campaign funded the discredited Steele Dossier, which one sub-source called as tantamount to ‘bar talk over beers.’

“The presidential campaign of Hillary Clinton and the Democratic National Committee paid for research that was included in a dossier made public in January that contained salacious claims about connections between Donald J. Trump, his associates and Russia,” the NY Times reported.

The Steele dossier was the basis of FISA application renewals to effectively spy on the Trump campaign, which was one of the most damaging actions in the history of U.S. “democracy.” If Hillary Clinton were held to the standard that she purportedly now supports, she would have been censored countless times on social media herself.

Why If Donald Trump Should Be Impeached & Convicted, Hillary Clinton Should Be, Too