Hillary Clinton Does Not Believe Putin Should Be ‘Let Back Into New World Order’: “Now is the Time to Double Down”

During the course of the interview, Todd asked Clinton if Russia should be “let back into the New World Order.” Watch:

“You heard Secretary [of State] Blinken essentially say, ‘look, sanctions relief could happen’,” Todd said. “It all depends on the behavior of Russia. Can we really live in a world where Putin’s let back into the New World Order?”

“Well, that’s not what I heard him say. What I heard him say was that, really we are going to support the Ukrainians, the people and the government of Ukraine, as they try to figure out what for them is the best way forward. And that I think is exactly the right position for the United States, Europe and the West and other countries to take,” she replied.

“Your second part of that question though, is a real important one. I would not allow Russia back into the organizations that it has been a part of. I think there’s an upcoming G20 event later in the year. I would not permit Russia to attend, and if they insisted on literally showing up, I would hope there would be a significant if not total boycott.”

“The only way that we’re going to end the bloodshed and the terror that we’re seeing unleashed in Ukraine and protect Europe and democracy is to do everything we can to impose even greater costs on Putin,” she remarked.

“There are more banks that can be sanctioned and taken out of the so-called SWIFT relationship,” she continued. “There is an increasing call for doing more on gas and oil. Now, obviously some of our strongest allies in Europe are desperately trying to get out from under their dependence upon Russian energy. We need to expedite, and I know the administration has been doing that, looking at more deliveries of liquified natural gas, for instance.”

“So I think now is the time to double down on the pressure,” Clinton added.

“Let’s not fantasize about what comes next in Russia,” she went on. “Let’s focus on what we’re doing right now to help protect and defend the Ukrainian people’s right to be a free democratic nation and protect their sovereignty.”

As commentary, Ukraine was in no meaningful sense a “free democratic nation” prior to the Russian invasion. Freedom House, a non-partisan, non-profit organization that ranks freedom in the world, assessed Ukraine as “partly free” in its 2021 report.

“Ukraine has enacted a number of positive reforms since the protest-driven ouster of then president Viktor Yanukovych in 2014,” Freedom House noted. “However, corruption remains endemic, and the government’s initiatives to combat it have met resistance and experienced setbacks. Attacks against journalists, civil society activists, and members of minority groups are frequent, and police responses are often inadequate.”

It is also questionable whether or not the nation’s elections are “democratic,” in that they represent the will of the Ukrainian people. In February 2014, Ukraine’s Rada [parliament] voted to remove pro-Russian president Viktor Yanukovych from office.

This “Maidan revolution,” billed as a reform movement to remove corrupt officials from office, was far from a spontaneous uprising. It received significant aid and support from the Obama State Department. Billionaire activist George Soros had praised the Ukrainian revolt and called for more such revolutions to happen around the globe.

Unfortunately, the reforms would not lead to improvements for the Ukrainian people, which remained among the poorest in Europe. The endemic corruption was put on further display by the post-Maidan events of 2014, which led to the unlikely twist that former Vice President Joe Biden’s own son Hunter Biden would receive a lucrative board position for a Ukraine gas giant known as Burisma.

In the big picture, the “New World Order” that Chuck Todd and Hillary Clinton are discussing, includes not only the interactions of nation-states, such as Russia and Ukraine, but intermediary globalist organizations like the United Nations, G-20, and World Economic Forum.

These globalist institutions are part of the framework of what marxian economist Immanuel Wallerstein referred to as part of the “world-system.” According to Wallerstein, there is an attempt to integrate nation-states into a “core” group of powers. The U.S. and Western Europe represent the “core,” while Eastern European nations like Ukraine and Russia represent the “semi-periphery.” 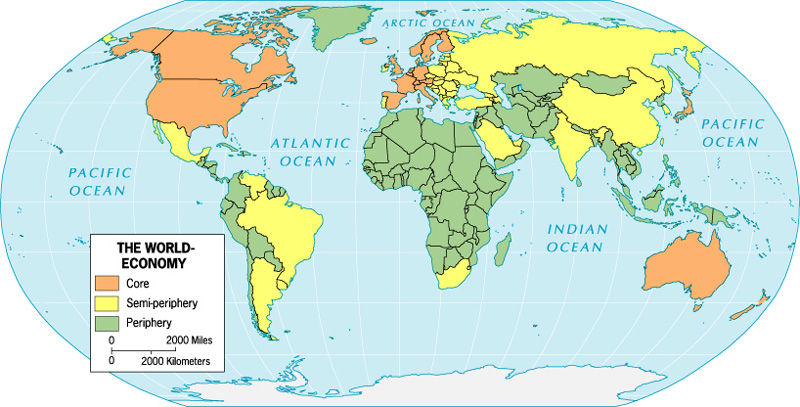 As a brief note, such a marxian analysis draws inspiration from the Hegelian dialectic, and its precursor in the Fichtean mode of thesis, anti-thesis, and synthesis. It is all adds up to a paradigm of what might be called “global convergence.” However, the paradigm is now being thrown into some doubt, due to the alternate reactions of Russia to resist such convergence, and for China to hijack it for its own ends.

Thus, Russia is now aggressively resisting the NATO expansionist attempt to integrate Ukraine into the “core,” similar to how it invaded Georgia in 2008 following the Bucharest Declaration.

Pentagon adviser Thomas Barnett, a Harvard-educated senior military analyst with the U.S. Naval War College, has explained these dynamics in his books, such as the Pentagon’s New Map (2004). Barnett, expressing what might be characterized as Hegemonic Stability Theory, proposes the U.S. play a leading role in “the Functioning Core” to integrate nations in the “Non-Integrating Gap.”

Putin had laid out his ostensible mission to resist such globalist integration in his famous Munich speech in 2007.

“The unipolar world that had been proposed after the Cold War did not take place either,” he continued. “The history of humanity certainly has gone through unipolar periods and seen aspirations to world supremacy. And what hasn’t happened in world history?”

“However, what is a unipolar world?” he said. “However one might embellish this term, at the end of the day it refers to one type of situation, namely one centre of authority, one centre of force, one centre of decision-making.”

“It is a world in which there is one master, one sovereign,” he said. “And at the end of the day this is pernicious not only for all those within this system, but also for the sovereign itself because it destroys itself from within. And this certainly has nothing in common with democracy.”

But the power play between Putin and the West should be viewed with a cautious lens: There is always the possibility that this is a dramatic confrontation being staged for the global audience’s consumption.

Prior to Russia’s invasion of Ukraine, Putin was a regular speaker at the World Economic Forum in Davos; Russia was praised as a “responsible global regulation leader” by WEF founder and chairman Klaus Schwab. Russia in October 2021, prior to the public falling-out between the WEF and Putin, had ‘joined’ its Fourth Industrial Revolution agenda. In 2017, Schwab had even (mistakenly) referred to Putin as a member of his Young Global Leaders club.

There is also some oddity in the execution of Russia’s war plan, such as its surrounding of Kiev, only to pull back and allow the city to fortify its defenses, thus forfeiting the element of surprise advantage. Now, there appears to be a stalemate, though Russia has achieved a fait accompli in the Donbas and Crimean regions.

The Russian invasion in Ukraine has not unfolded how an analyst might expect, given its overwhelming advantages in the early stages. The United States repeatedly warned Ukraine about the incoming Russian invasion, but those warnings were not acted upon with the commensurate sense of urgency.

This brings us to Hillary Clinton’s remarks on “doubling down” with economic sanctions against Russia. It should not be ignored that the West’s severe economic sanctions continue the global supply chain disruption witnessed under the Covid-19 pandemic, threatening severe malnutrition and starvation in the poorest regions of the world, and imperiling the dollar’s status as the global reserve currency.

One of the lynchpins of world agriculture markets is fertilizer, which comes in large supply from Russia.

“Sky-high fertilizer prices have farmers worldwide scaling back its use and reducing the amount of land they’re planting, fallout from the Ukraine-Russia conflict that has some agricultural industry veterans warning of food shortages,” Reuters reported in later March.

“Western sanctions on Russia, a major exporter of potash, ammonia, urea and other soil nutrients, have disrupted shipments of those key inputs around the globe,” the report noted. “Fertilizer is key to keeping corn, soy, rice and wheat yields high. Growers are scrambling to adjust.”

Also disrupting global food supplies is the oil and gas bottlenecks that have come from Western sanctions, and Russia’s insistence that nations pay for their imports in Rubles. While oil and gas prices have surged following Russia’s invasion of Ukraine, the ensuing spike is a continuation of the trend that began under the Biden administration.

The president, tellingly, has attempted to frame Putin’s actions as the cause of the surging oil and gas prices. Zelensky, for his part, has proposed that Europe and the rest of the world “go green” in order to stop oil and gas dependence and ensuing wars.

Due to the spread of market economies under globalization since the turn of the 21st century, extreme poverty in the world plummeted. The formal end of the Soviet Union, communist Chinese reforms, and the rolling back of socialist policies in India, contributed to a marginal but significant improvement in the qualify of life for the world’s poorest. That improvement slowed around 2019, and was brought to a grinding halt due to the global coordinated response to the Covid pandemic.

Such a convincing refutation of the marxist chimera of ‘inequality’ — which erroneously frames economies as a zero-sum game, instead of a positive-sum game — should have led the way to a new age of enlightenment. The spread of private property rights, true democratization (instead of globalist-engineered coups in the semi-periphery) and market economies held great promise for lifting the world’s poorest people and giving the most marginalized among us a voice in their own lives.

Instead, as Hillary Clinton points out, the plan is to “double down” on global disruption, even if that means the poorest and most vulnerable pay the steepest price in their mad scramble for power consolution in the “new world order.”

Zelensky Has a Solution to Stop Wars Like the Russian Invasion: ‘Green Energy’