Hillary Clinton made a surprise appearance on Monday night at the Met Gala, which showcases high fashion. Watch:

In an exclusive clip from Vogue, Clinton revealed that a secret message was hand-embroidered onto the maroon gown by the designer Altuzarra.

“I knew that I wanted the dress to have a personal component for her,” Altuzarra told Vogue. “When someone like Hillary goes to the Met, it’s not just like, ‘there’s Hillary at the Met and she’s wearing a dress.’ It has a lot of significance. I felt like I had to be very thoughtful about what the dress would mean to the theme and to the occasion.”

Clinton’s appearance at the Met Gala is indeed rare: This is the first time in 20 years she had attended, revealing to journalist Hamish Bowles that she “promised” she’d only come “every 20 years.”

“I think we’re all happy to be back together, supporting the museum and the costume institute and also celebrating America,” she told Vanessa Hudgens and Bowles. “Not just fashion of America, but really the spirit of America.”

Hillary Clinton claims that the ‘secret message’ stitched into the dress was the designer’s idea. She decided to go with iconic women — but she couldn’t resist a reference to herself in the impressive list. She added the name of her own mother.

“I would’ve filled the entire dress,” she said with a laugh. “We decided to stick with women who were no longer with us.”

“It also reflected Joseph’s interest in what were called ‘friendship quilts’ that women used to embroider sayings or phrases or their names of family or friends,” she added.

It “pays homage to the homemakers, seamstresses,” she said, which Altuzarra mentioned was part of American fashion.

Hillary Clinton also made the “OK” hand signal that U.S. media outlets once claimed was a sign of “white supremacy.” 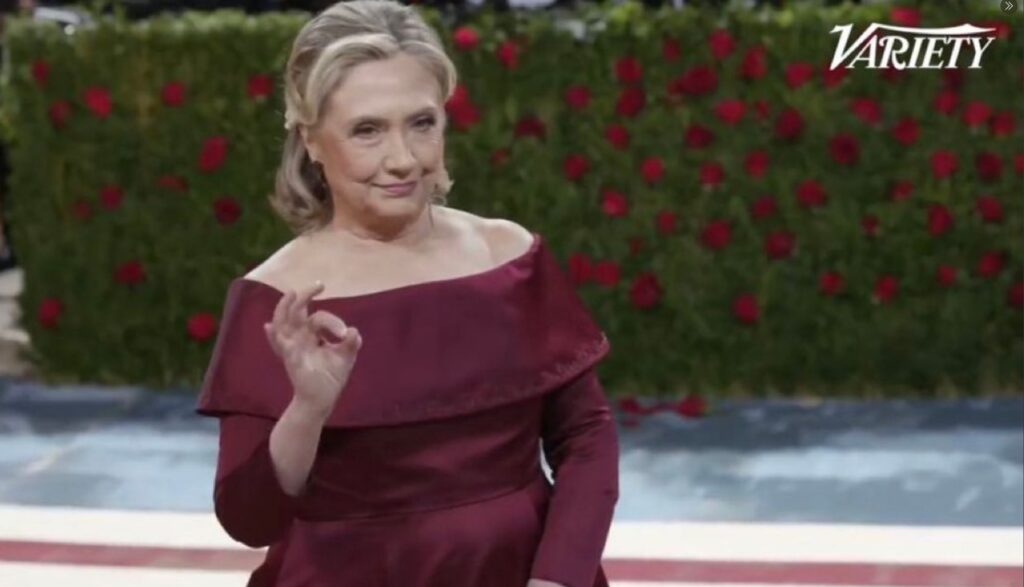 Double standards are apparently par for the media’s course.

A picture's worth a thousand words pic.twitter.com/LJIJsHcnjh

Bringing a little swagger back to the #MetGala!

Honored to be here. pic.twitter.com/PuyOfy6FmQ

Obviously, no Republicans or conservatives were invited. That would “unfashionable.”