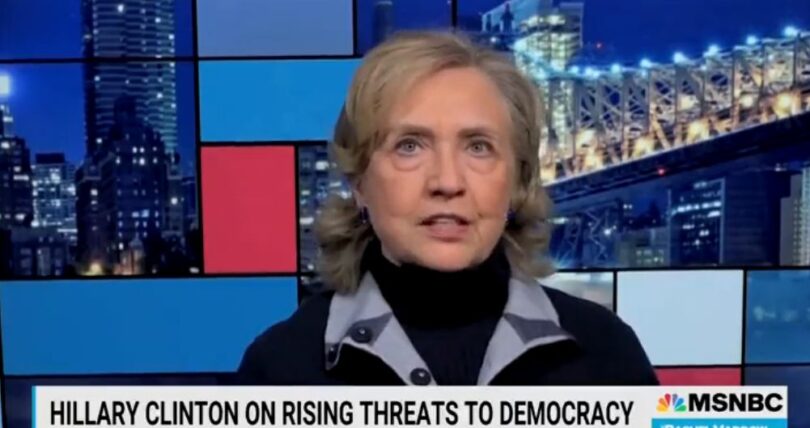 Hillary Clinton, the originator and mastermind behind the Russia Hoax, now has another left-wing fairy tale for America: It’s actually right-wing extremists who are carrying out a “coup” against the country.

Clinton was invited on Rachel Maddow’s show on MSNBC to deliver a chilling message that is exactly the kind of upside-down world propaganda that Americans have come to expect of the radical left. Watch:

“We have got to end impunity,” Clinton said. “We have to hold people accountable for their actions, particularly when those actions threaten our way of life, our rule of law, our future as a democracy.”

“And so, I am determined to speak out, to do whatever I can, and in fact, in the book we wrote, ‘A State of Terror,’ as you know, there is a plot against the country by people who truly want to turn the clock back,” she continued.

“They believe that the progress we’ve made on all kinds of civil rights, human rights, the cultural changes that have taken place, are so deeply threatening that they want to stage a coup,” she went on.

“Now, think about it, because that is truly what is behind Trump and his enablers, and those who invaded and attacked our capital,” Clinton added.

It is important to note the context of who is speaking these words: Hillary Clinton. The 2016 presidential election loser who “undermined democracy” by refusing to accept the election results had also hatched a Russia collusion plot to ensnare her opponent. This is an act of treason that was recently exposed in alarming fashion with Special Counsel John Durham’s recent indictment of Steele dossier subsource Igor Danchenko.

“The five count-indictment of Igor Danchenko reveals the Christopher Steele informant actually got his fake ‘intelligence’ on Trump-Russia directly from a Hillary Clinton P.R. guy who goes unnamed in the indictment, but who internet sleuths and reporters have identified because his cv matches up with the indictment particulars,” PJTV’s Victoria Taft summarizes.

“Danchenko promised a State Department job in a Hillary Clinton Administration, then funneled the fake news to Christopher Steele, who worked for Fusion GPS. Fusion answered to Perkins Coie, the law firm working for Hillary Clinton, Democrats, or both,” Taft notes.

Another disturbing revelation to come out of the indictment is that a member of Donald Trump’s national security team, Fiona Hill [“Think Tank Employee-1”], had worked with Igor Danchenko and had actually arranged his meeting with Christopher Steele [“U.K. Person 1”] as well as with Olga Galkina [“P.R. Executive 1”].

Alarmingly, Galkina, who had been promised a job in Clinton’s State Department had Hillary won the 2016 election, assessed Danchenko as a possible FSB asset [i.e., an agent of a Russian intelligence agency successor to the KGB]. Yet, she wanted to do business with him anyway.

“He is too young for KGB,” Galkina apparently stated. “But I think he worked for FSB.”

Thus, the Clinton-deployed orchestrators of the Russia hoax were knowingly willing to collude with Russia’s intelligence agencies to frame Donald Trump in the 2016 election. This is the exact opposite of what the U.S. mainstream media had been shouting all-too-loudly for over three long years during the interminable Russia ‘witch hunt.’

As I have long argued, the Russia hoax bears all the hallmarks of a FSB-orchestrated ‘dezinformatsia‘ operation. Political operators leveraged the ambitions of a craven political candidate, Hillary Clinton, to sow chaos into the election. The ultimate aim of Russian interference, recall, was not to aid Trump, but to discredit the legitimacy of U.S. institutions. Mission accomplished.

Furthermore, there have been no “insurrection” charges leveled against far-right extremists, and separately, Trump supporters, who were at the capitol on January 6. The FBI has been unable to corroborate any indication that there was a centralized plot to overturn the 2020 election results.

Hillary Clinton can spin a fictional yarn about her political enemies committing treason and carrying out a “coup” all she likes. It is still a ‘free country,’ sort of. But her propaganda provides more of a snapshot into her own approach to U.S. politics than Democrat-friendly media types are willing to admit.