Rachel Maddow is no stranger to fake news. But the MSNBC host’s wild conspiracy theories and inaccurate reporting has typically revolved around political gossip, Capitol Hill intrigue, and a chronic case of Trump Derangement Syndrome.

On Saturday, however, the MSNBC host’s personal Twitter account amplified a local tall tale about the drug Ivermectin, which has progressives throwing a tizzy over anecdotal cases that it may have helped some people recover from Covid. (Joe Rogan being the case in point.) Maddow took the local story and blew it up into a national one. 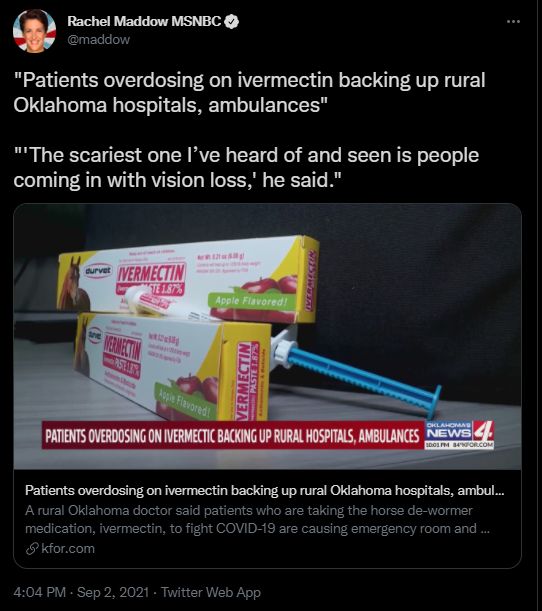 “Patients overdosing on ivermectin backing up rural Oklahoma hospitals, ambulances,” Maddow quoted from a local news article. “‘The scariest one I’ve heard of and seen is people coming in with vision loss.’ he said.”

The news article itself gives off signals right away that it is not a legitimate source of information.

“A rural Oklahoma doctor said patients who are taking the horse de-wormer medication, ivermectin, to fight COVID-19 are causing emergency room and ambulance back ups,” News 4 reported on Friday.

“There’s a reason you have to have a doctor to get a prescription for this stuff, because it can be dangerous,” said Dr. Jason McElyea.

“The ERs are so backed up that gunshot victims were having hard times getting to facilities where they can get definitive care and be treated,” he claimed.

However, the Northeastern Health System of Sequoyah put out an advisery that he no longer has any affiliation with the hospital network. 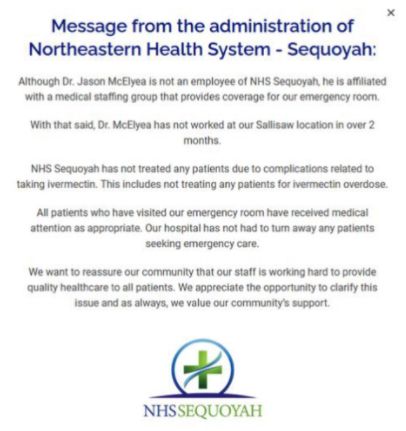 “Although Dr. Jason McElyea is not an employee of NHS Sequoyah, he is affiliated with a medical staffing group that provides coverage for our emergency room,” NHS Sequoyah wrote.

“With that said, Dr. McElyea has not worked at our Sallisaw location in over 2 months,” the statement said. “NHS Sequoyah has not treated any patients due to complications related to taking Ivermectin. This includes not treating any patients for Ivermectin overdose.”

“All patients who have visited our emergency room have recieved medical attention as appropriate,” the statement continued. “Our hospital has not had to turn away any patients seeking emergency care.”

“We want to reassure our community that our staff is working hard to provide quality healthcare to all patients,” the statement added.

Rachel Maddow’s report thus was completely discredited by the hospital itself.

Contrary to media misreportage, Ivermectin is not just a ‘horse dewormer’ medication. It is a Nobel-prize winning treatment for human beings that has been used as an anti-parasitic. The FDA nonetheless has cautioned people against taking it without a doctor’s prescription, which would include taking doses intended for barn animals.

“People are purchasing various highly concentrated animal ivermectin drug formulations such as ‘pour-on,’ injectable, paste and ‘drench’ that are intended for horses, cattle and sheep, and taking these drugs has made some people very sick,” the FDA wrote in a letter to veterinarians. “Even if animal drugs have the same active ingredient as an approved human drug, animal drugs have not been evaluated for safety or effectiveness in humans.”

“Treating human medical conditions with veterinary drugs can be very dangerous,” the agency continued. “The drug may not work at all, or it could worsen the illness and/or lead to serious, potentially life-threatening health complications.”

“Ivermectin is not authorized or approved by FDA for prevention or treatment of COVID-19,” the CDC wrote, noting insufficient data from the National Institutes of Health’s COVID-19 Treatment Guidelines Panel.

But the drug has been used to treat humans, therefore, calling it a “horse dewormer” is ignorant at best and dishonest at worst. The CDC even issued a protocol that refugees from certain African nations be prescribed Ivermectin upon entry to the United States.

A Centers for Disease Control and Prevention guideline for refugees issued in 2019 shows that it was a regular part of the regimen of preventing parasites from being brought over to the United States.

“These guidelines are recommendations for the International Organization for Migration (IOM) physicians and other panel physicians who administer overseas predeparture presumptive treatment for intestinal parasites,” the document reads.

“All African refugees who did not originate from or reside in countries where Loa loa infection is endemic (Box 1), with exceptions noted in this document, should receive presumptive therapy with… Ivermectin, two doses 200 mcg/Kg orally once a day for 2 days,” the CDC lists as one of the medications.

“Moderate-certainty evidence finds that large reductions in COVID-19 deaths are possible using ivermectin. Using ivermectin early in the clinical course may reduce numbers progressing to severe disease,” a study in the American Journal of Therapeutics published in June 2021 concluded. “The apparent safety and low cost suggest that ivermectin is likely to have a significant impact on the SARS-CoV-2 pandemic globally.”

It is not certain whether or not Ivermectin is a suitable treatment for Covid-19. But one thing is for certain: Calling it merely a ‘horse dewormer’ that is causing emergency rooms to be overrun by patient overdoses is fake news.

As Covid Cases Surge, CDC Does Not Legally ‘Allow’ Americans to Know Variant They Are Infected With