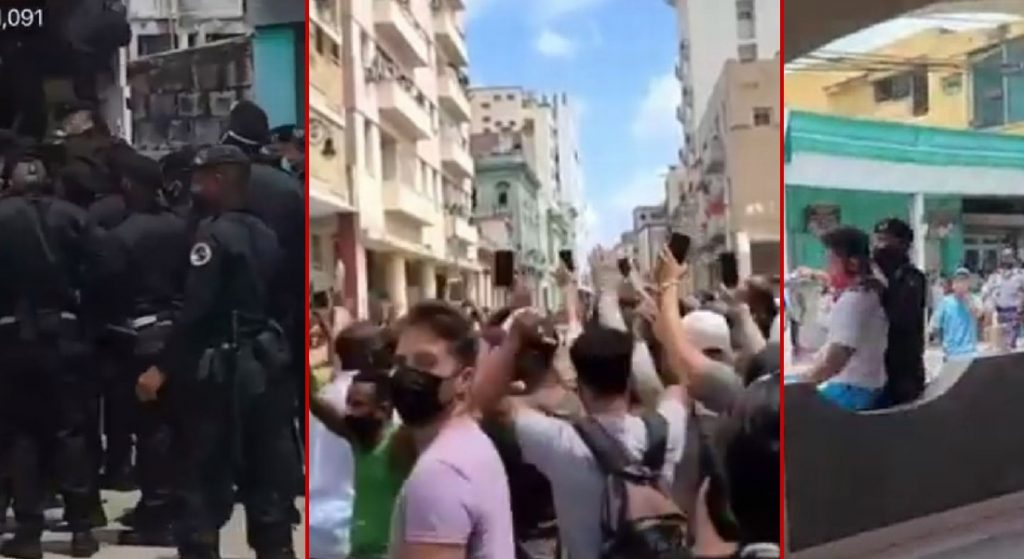 The House Democrat’s call to lift the sanctions on the communist government would be reinstating the policy that originated under former President Obama.

“I commend these brave protesters and all those demanding respect for democracy anywhere around the world, including here at home, for standing up and making their voices heard. Cubans are facing profound hardship because of the health and economic impacts of COVID-19, the entrenched culture of corruption and mismanagement among Cuba’s leadership, and the strict sanctions callously imposed by the Trump Administration,” Meeks said in a statement.

“Cubans are angry and they have every right to express their frustrations and engage in peaceful protest — basic human freedoms that must be respected, not punished,” Meeks added. “I call on President Biden to help alleviate the suffering in Cuba by rescinding the Trump era sanctions and offering additional humanitarian and vaccine assistance to the Cuban people.”

“I’d try to reverse the failed Trump policies that inflicted harm on Cubans and their families,” Biden said in September 2020. The presidential candidate argued that Trump “has done nothing to advance democracy and human rights; on the contrary, the crackdown on Cubans by the regime has gotten worse under Trump, not better.”

Biden thus far has continued Trump’s policy imposing sanctions. On Monday, Secretary of State Tony Blinken issued a statement that states that Cuba is solely to blame for its disastrous economic conditions.

“I think it would be a grievous mistake for the Cuban regime to interpret what is happening in dozens of towns and cities across the island as the result or product of anything the United States has done,” Blinken said.

However, U.S. media outlets are claiming that it is Trump’s embargo on Cuba that is the reason for the Cuban people’s plight and the subsequent uprising. This is a claim that has been made by the Democratic Socialists of America’s International Committee:

DSA stands with the Cuban people and their Revolution in this moment of unrest. End the blockade. pic.twitter.com/jzFVrthoMm

The Biden administration on Monday morning issued a vague statement that appeared to blame COVID for the uprising.

“We stand with the Cuban people as they bravely assert their fundamental and universal rights, and as they all call for freedom and relief from the tragic grip of the pandemic and from the decades of repression and economic suffering,” Biden’s Twitter statement on Monday said.

But White House Press Secretary Jen Psaki admitted in a press conference it was not even personally issued by Biden.

“We, of course, are monitoring closely, you saw the statement the president — we put out in the president’s name this morning, in his voice of course, conveying his support for the people of Cuba,” Psaki said.

The messaging compounds the problematic statement from a State Department official on Sunday.

Peaceful protests are growing in #Cuba as the Cuban people exercise their right to peaceful assembly to express concern about rising COVID cases/deaths & medicine shortages. We commend the numerous efforts of the Cuban people mobilizing donations to help neighbors in need.

“Peaceful protests are growing in #Cuba as the Cuban people exercise their right to peaceful assembly to express concern about rising COVID cases/deaths & medicine shortages,” Julie Chung, the Acting Assistant Secretary for U.S. Department of State’s Bureau of Western Hemisphere Affairs, tweeted. “We commend the numerous efforts of the Cuban people mobilizing donations to help neighbors in need.”

But here are videos on the Cuban demonstrations that prove that they were about ‘freedom’ and not about COVID.

Pro-democracy protestors in the Cuban town of Batabanó have seized control of the Young Communists headquarters.

These images are surreal. Courage is contagious. Make them go viral. #PatriaYVida
pic.twitter.com/c4B3jRyItf

Furthermore, the Cuban government instituted brutal crackdowns, including arrests of at least 100 protesters.

Cuba’s communist regime is mobilizing its infamous Black Berets to shut down the uprising that is currently underway across the island. This is going to get violent.

Stand with the Cuban people. Demand their freedom now! #SOSCuba🇨🇺pic.twitter.com/FeDklxkksp

There were a number of media outlets that also blamed the Cuba uprising on the COVID pandemic. The New York Times’ tweet in particular stood out.

Shouting “Freedom” and other anti-government slogans, hundreds of Cubans took to the streets in cities around the country on Sunday to protest food and medicine shortages, in a remarkable eruption of discontent not seen in nearly 30 years. https://t.co/BbqQPLrNiE

“Shouting ‘Freedom’ and other anti-government slogans, hundreds of Cubans took to the streets in cities around the country on Sunday to protest food and medicine shortages, in a remarkable eruption of discontent not seen in nearly 30 years,” the Times wrote. Of course, the mainstream media and the Biden administration are both misleading Americans about the situation in Cuba. And the obvious reason is that they feel a kinship with Cuba’s oppressive communist system and want to deceive Americans about its true nature.

Donald Trump issue a statement of support for the Cuban people, while blasting Biden for failing to stand up to the Communist regime.

“Big demonstrations are breaking out in Cuba and Miami in protest of the Communist Cuban Government (although, today there are zero protesters in Cuba—you know what that means!),” Trump stated.

“Don’t forget that Biden and the Democrats campaigned on reversing my very tough stance on Cuba,” he continued. “Remember when Obama attended baseball games with Castros while they imprisoned, beat, and killed the Cuban people.”

“I stand with the Cuban people 100% in their fight for freedom,” the statement went on. “The Government must let them speak and be free!”

“Joe Biden MUST stand up to the Communist regime or—history will remember,” Trump added. “The Cuban people deserve freedom and human rights! THEY ARE NOT AFRAID!”

Lifting former President Trump’s reinstated embargo would only help the illegitimate communist Cuban regime. The Democratic Party knows this and is seeking for President Biden to provide aid and comfort to these oppressive socialist tyrants.