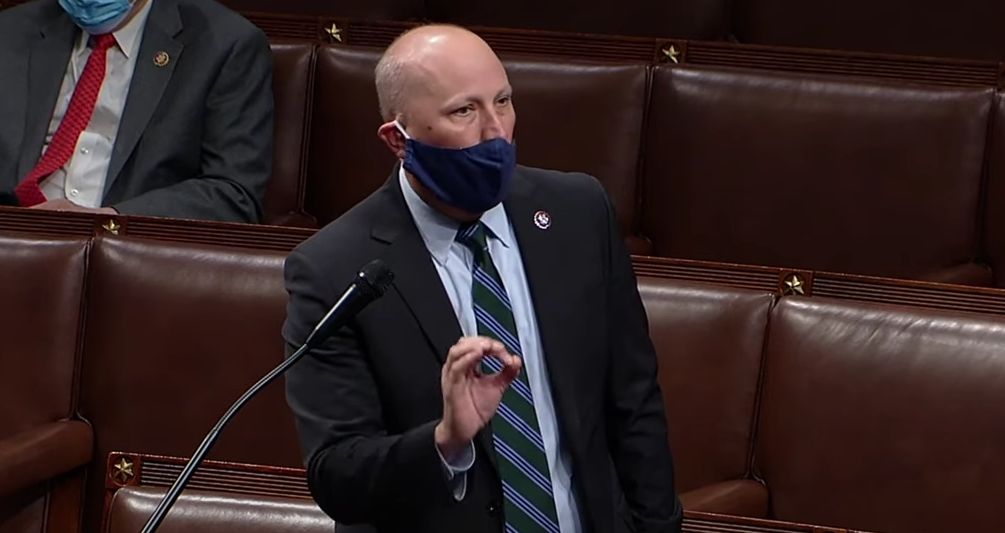 The Democratic-led House of Representatives passed two bills on Thursday that constitute a major expansion of federal gun control laws.

The Bipartisan Background Checks Act of 2021 passed by a vote of 227-203. Eight Republicans voted for the legislation with one Democrat voting against.

Chip Roy blasted the legislation, along with Rep. Lauren Boebert and Rep.Burgess Owens. Watch these passionate speeches below:

“American citizens are unsafe,” Roy said. “I’m not making that up. For the last two years, I’ve heard my Democratic colleagues talking about a fake crisis at our border. There’s nothing fake about a 100,000 people coming across our border or high-speed chases… There is nothing fake about that.”

“Break-ins, lives in danger, people own ranches,” Roy continued. “And now my Democratic colleagues after defunding the police, opening up our borders, want to take away our God-given right. Yes, God-given right to defend ourselves under the Second Amendment, That’s what this is about.”

“This is about creating a gun registry to track guns of the American people,” Roy went on. “There is no way to implement what the Democrats are trying to implement without doing that. And I can just tell you straight up: Texans, Americans, the government is never going to know what weapons I own.”

“Let me be clear about that, it’s not going to happen,” he said. “We have a God-given right to defend our families, defend our state, and defend ourselves against tyranny, and we will do that regardless of what this Democratic Congress is trying to jam through.”

Rep. Burgess Owens also rose in opposition to the bill and began by reading samples from over a thousand emails he received.

“These rights to protect my life, liberty, and property were granted to me by God. It cannot be taken away from me by D.C. bureaucrats,” Owens read on. “I grew up in the deep South at a time with black Americans were unable to defend themselves. After the Civil War, black codes, and Jim Crow laws, prohibited people of color from owning firearms. In mid-1950s, Martin Luther King Jr. kept firearms for self-protection. But his application for concealed weapon permit was denied because of racist gun control laws in his state.”

“As a child, my dad witnessed an altercation between his father and a southern white man who thought my grandfather was being disrespectful and threatened to teach him a lesson,” Owens continued reading. “Later that night, he drove up to my grandfather’s home with a bunch of his friends, standing on the forerunner of a Model T Ford. My grandfather was prepared. He and his brothers had hidden around his front porch. As these bullies and cowards approached the house, they heard the click of rifles and left as fast as they came. When I find his gun on another human being, my grandfather’s right to own a firearm, and showed his rights to protect his life, liberty and property.”

“I wish my colleagues would vote against these anti-Second Amendment bills,” Owens concluded.

“I was raised, Mr. Speaker, in a Democrat home,” Boebert said. “So I understand how these policies are deceiving. I understand that we’re told guns are scary. That’s what we were told, and that’s what we believed. Because we trusted the people that we voted for.

“But just as most things in life, I grew up and learned that there’s a better way to live. I was ignorant to firearms and the proper use of them. When I became a business owner, I needed to protect myself. There was an altercation outside of my restaurant where a man was physically beat to death. There were no weapons involved. He was beat to death by another man’s hands.”

“I have a lot of young girls who work in my restaurant, and we needed an equalizer. I’m five foot tall, I barely weigh 100 pounds. I need something against a stronger potential aggressor to defend myself with. Talk about women’s rights. Don’t take my right away to protect myself. I mean, seriously, what are we doing here? I ask the supporters of this legislation: who do you think you are to disarm Americans and leave them vulnerable without help? You want to defund our police and yet leave us without a way to protect ourselves.”

“Our founding fathers gave us a list of items and said ‘don’t touch these things.’ Keep your hands off our Second Amendment,” Boebert concluded.

The bill now heads to the Senate. Texas Senator Ted Cruz has also spoken out against the legislation.

Bearing Arms analyzed the thrust of the H.R. 8 legislation.

“As the NRA briefly explained in its tweet, the bill by Rep. Mike Thompson is a ‘universal background check’ bill that would require all transfers of firearms, even those that are temporary, to go through a background check conducted by an FFL,” the site reports. “Failure to do so would result in up to a year behind bars in a federal prison, and there are few exceptions contained in Thompson’s legislation. Immediate family members, for instance, could still transfer a gun without a background checks, but giving or selling a gun to your cousin would be against the law.”

As Bearing Arms further notes, “Under Thompson’s bill, it would be legal for you to give or sell a gun to your aunt, who could then turn around and sell it to her daughter without having to go through a background check, but selling or giving the gun directly to your cousin could land you in the pokey.”

The House Democrats spearheaded a second bill, H.R. 1446, which is predicated on closing the so-called “Charleston loophole,” referencing the white supremacist mass shooter Dylann Roof. It would expand the federal background check from three days to nine days. It passed 219-210 with two Republicans supporting and two Democrats opposed.