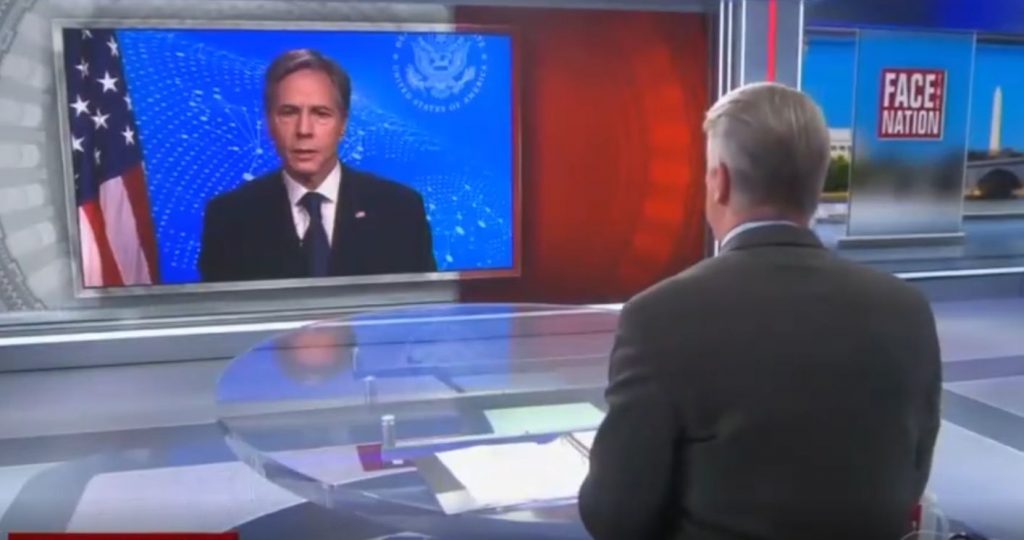 Secretary of State Tony Blinken admitted that the United States had to ask the Taliban not to harm American fleeing the failed state of Afghanistan.

Blinken appeared on “Face the Nation” on Sunday with host Major Garrett to explain how such a calamity to U.S. foreign policy could have happened.

“The president said that we have an agreement with the Taliban,” Garrett began. “Mr. Secretary, that implies that we are negotiating with them. Does that not already confer upon them legitimacy?”

“No,” Blinken said. “No, we’ve had for a long time contact with the Taliban, both at a political level, in Doha, going back, going back some years, as well as now on the ground, in Kabul, a working relationship in order to de-conflict, in order to work through any problems with people getting to the airport.”

“That’s been very important to making sure that we can actually advance our own interests in getting people out safely, and as effectively as posssible,” Blinken added. “So, that’s the nature of the relationship.”

“Some in our audience might listen to you, Mr. Secretary, and say, ‘Oh, so we have to ask the Taliban’s permission for Americans to leave’.” Garrett said. “True or not true?”

“They, they are in control of Kabul,” Blinken said. “That is the reality. That’s the reality that we have to deal with.”

“How comfortable are you with that, Mr. Secretary?” Garrett asked.

“What I am focused on, what we’re all focused on, is getting people out,” Blinked responded. “And making sure that we are doing everything possible to do that. In this case, it is, I think, a requirement of the job to be in contact with the Taliban that controls Kabul.”

“Look, what we’ve seen, Major, is also pretty remarkable,” he continued. “Go back a week. The government itself, and by the way, I was on the phone with President Karzai the day before, when he was telling me, as he put it, his intent to fight to the death. Well, the next day he was gone.”

It should be noted that Hamid Karzai is the former president of Afghanistan. The Afghan president who fled when the Taliban retook Afghanistan, reportedly with $169 million in cash, is Ashraf Ghani.

“The military collapsed,” Blinken continued. “In the space of that week, our military went in, secured the airport, got our embassy to safety at the airport, from the embassy compund, began this remarkable evacuation effort.”

“And as I said, we had about 8,000 people out, not just in the last 24 hours, but going back to the end of July, it’s 30,000 people, and that’s quite extraordinary,” he added. “It doesn’t just happen, an extraordinary amount of effort and planning went into that, including a lot of pre-planning, and that’s what we’re focused on now. Getting that mission done.”

Afghanistan fell into the hands of the murderous Islamist regime last Sunday after nearly two-decades of war. President Joe Biden had overruled his general’s warnings and ordered an abrupt military withdrawal ahead of the evacuation of civilians.

On Friday, Biden was peppered with questions on the Afghanistan withdrawal, including his flawed risk assessment that terrorists won’t return to Afghanistan, why the Biden administration doesn’t know how many Americans need to be evacuated, and how he can be sure that Americans who are trying desperately to make it to Kabul International Airport will be safe.

“Why do you continue to trust the Taliban, Mr. President?” a reporter shouted as Biden left the press conference. The question would remain unanswered.

Also on Sunday, National Security Adviser Jake Sullivan was confronted by CNN’s Brianna Keilar about the danger being posed to Americans from the Afghanistan withdrawal.

“We know no circumstance where American citizens are carrying an American passport are trying to get through to the airport,” Sullivan claimed. “To the best of our knowledge, the Taliban checkpoints, they are letting through people showing American passports.”

“Alright. So, we know that’s not true,” Keilar said. “We know there are many instances where that has not been true. And the Pentagon has acknowledged that as well. We also — you know, he also said that Al Qaeda is gone from Afghanistan. But, of course, from the U.N., the joint chiefs, we know that is also untrue. Why is he misleading with his words here?”

“First of all, I reject that characterization with respect to al Qaeda,’ Sullivan said. “Right now our intelligence community does not believe that al Qaeda, in Afghanistan, represents a threat to the United States homeland. That’s what the president was referring to.”

“He has also clearly said over time that al Qaeda could, in the future, represent a threat to the U.S. homeland and that is why he has positioned an over-the-horizon capability with intelligence assets and defense assets to ensure that never happens,” he went on. “And he has pointed out that we have been able to deal with and suppress terrorist threats in other countries that do have attack capabilities against America without a permanent military presence on the ground. We intend to do the same thing when it comes to Afghanistan.”

“Americans who have clearly had problems getting through the Taliban?” Keilar asked.

Meanwhile, Americans are still in harm’s way in Afghanistan. The State Department issued a warning on Saturday to Americans to stay away from Kabul airport unless directed by U.S. authorities. Intelligence reports of ISIS terrorists targeting Americans, and even that the Taliban has beaten Americans who are trying to escape the wartorn country, which collapsed after President Biden’s abrupt ithdrawal of U.S. military troops ahead of an evacuation of civilians.

The U.S. press has clearly turned on the entire Biden administration in the aftermath of the Afghanistan disaster, not just President Biden himself. As Americans remain in harm’s way, voters might be wondering where this scrutiny was before Biden was sworn in as president.