President Joe Biden’s son, Hunter Biden, has been under immense scrutiny since the 2020 election campaign for his cashing in on his father’s name in multiple international deals. He has been under federal investigation since at least the Obama administration, and has been the subject of a widening tax probe since 2018.

But newly uncovered recording may blow all of that out of the water: It is an authenticated recording of Hunter Biden acknowledging that one of his business partners was the “f***ing spy chief of China.” It thus heightens already serious concern over the Biden family member as a national security threat.

But an explosive recording may blow all of that out of the water: It is an authenticated recording of Hunter Biden acknowledging that one of his business partners was the “f***ing spy chief of China.” It thus heightens already serious concern over the Biden family member as a national security threat.

The recording from Hunter Biden’s laptop was examined and authenticated by experts cited by the Washington Examiner. (It was originally reported in October 2020 at the National Pulse.) Listen:

“Hunter Biden’s business ties to men he believes were connected to Chinese intelligence loom large as he faces an investigation into his taxes, overseas business dealings, and possible foreign lobbying,” the Examiner reported. “Records from a copy of Biden’s abandoned laptop, which has been obtained and reviewed by the Washington Examiner, show he believed some of his Chinese business partners were connected to Chinese intelligence services and that he worried about the Foreign Agents Registration Act.”

“I have another New York Times reporter calling about my representation of the, literally, Dr. Patrick Ho — the f****** spy chief of China who started the company that my partner, who is worth $323 billion, founded and is now missing,” Hunter Biden said. “The richest man in the world is missing, who was my partner.”

“Ho was working for Ye Jianming, chairman of CEFC, as the company pursued business in the United States and around the world,” the Examiner noted. The audio recording was authenticated as Hunter Biden by Konstantinos “Gus” Dimitrelos, a cyber forensics expert commissioned by the Washington Examiner to examine the laptop copy.

He concluded that “there is a 100% certainty that Robert Hunter Biden was the only person responsible for the activity on this hard drive and all of its stored data.”

Hunter Biden, even more disturbingly, went so far as to agree to be Patrick Ho’s attorney, according to an engagement letter on his laptop.  Ho agreed to pay a $1 million retainer with Hunter Biden for “counsel to matters related to U.S. law and advice pertaining to the hiring and legal analysis of any U.S. law firm or lawyer.” “Ho was sentenced to three years in prison in March 2019 for violating the Foreign Corrupt Practices Act,” the Examiner notes. “He was deported to Hong Kong in June 2021 after serving his sentence.”

“The first call Ho made after his arrest in 2017 was to President Joe Biden’s brother, James, who has said he thought the call was meant for Hunter Biden,” the report added.

A ‘bombshell’ Hunter Biden text first discussed on air prior to the 2020 election implicates Joe Biden as benefiting from his son’s illicit deals over the course of three decades.

It regards a text conversation between Hunter Biden and his daughter Naomi, who is the president’s granddaughter. A copy of that text from December 26, 2018 has been provided to Becker News. 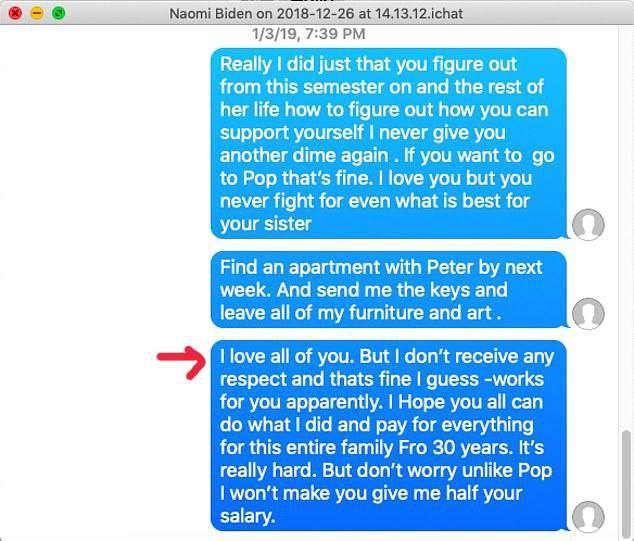 “I love all of you,” the Hunter Biden text reads. “But I don’t receive any respect and thats fine I guess — works for you apparently. I Hope you all can do what I did and pay for everything for this entire family Fro [sic] 30 years.”

“It’s really hard,” the Hunter Biden text shows. “But don’t worry unlike Pop I won’t make you give me half your salary.”

The new Hunter Biden revelation directly implicates knowing complicity by a Biden family member in an act of high treason with a high-ranking member of the Chinese Communist Party. There needs to be a Special Counsel investigation into “the Big Guy” now.