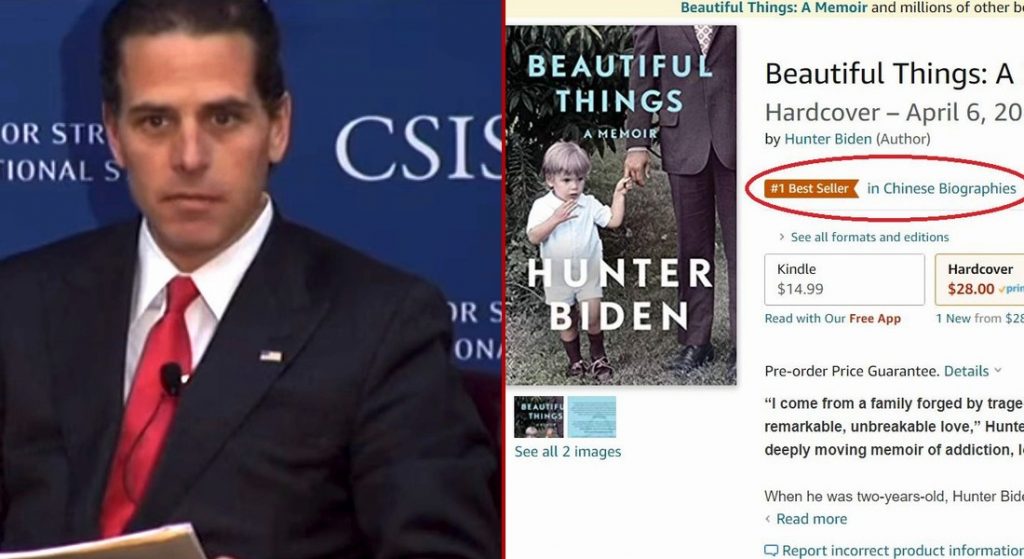 Hunter Biden is a big hit with the Chinese. And now, by all appearances, that includes his new biography about overcoming drug addiction, presumably, which will be called “Beautiful Things: A Memoir.”

The Chinese just can’t get enough Hunter Biden! It is already getting a rush of orders in the Chinese Biographies section.

This is real go check pic.twitter.com/8kFKV0bxR2

As Newsweek noted in a report on the book’s popularity in Chinese biographies:

“Biden’s memoir was purchased by Simon & Schuster in the fall of 2019 but kept secret until Thursday, according to The Associated Press. A description from the publisher says the book ‘details Hunter’s descent into substance abuse and his tortuous path to sobriety.'”

The book is scheduled to be published in the U.S. on April 6 by Gallery Books, which is an imprint of Simon & Schuster, the New York Times reported.

But why would the Chinese be so interested in reading about the exotic adventures of Hunter Biden, which allegedly includes doing crack, patronizing Ukrainian prostitution rings, and racking up millions in international business deals based, admittedly, on no other reason than he was the vice-president’s son?

They love a good comeback story? Perhaps. It just could be that the Chinese people identify with Hunter Biden because he’s like a “rising dragon” poised to take the world by storm.

Or it could be the avalanche of assuredly objective rave reviews from successful authors, as the New York Times notes, like “Anne Lamott, Dave Eggers, Bill Clegg and Stephen King.”

The master of horror, King himself, writes:

“In his harrowing and compulsively readable memoir, Hunter Biden proves again that anybody — even the son of a United States President — can take a ride on the pink horse down nightmare alley… Biden remembers it all and tells it all with a bravery that is both heartbreaking and quite gorgeous. He starts with a question: Where’s Hunter? The answer is he’s in this book, the good, the bad, and the beautiful.”

The book publisher did not disclose the financial terms to the Times, but there may be a plausible reason why the Chinese are so hot on Hunter Biden’s book: It is being bought by people who do not intend to read it.

This is an allegation, founded on the knowledge of how things work in The Swamp, that is not lost on many American readers reacting to the story:

Another incidental nugget about the book deal:

A former Hunter Biden associate named Patrick Ho, former head of the Chinese Energy Conglomerate (CEFC China), was sentenced in 2019 for “international bribery” and “money laundering offenses.” In December 2020, a federal appeals court in New York upheld the conviction of Patrick Ho. Hunter Biden is named in an email obtained by the New York Post. The Post reports:

One email sent to Biden on May 13, 2017, with the subject line “Expectations,” included details of “remuneration packages” for six people involved in an unspecified business venture.

Biden was identified as “Chair / Vice Chair depending on agreement with CEFC,” an apparent reference to the former Shanghai-based conglomerate CEFC China Energy Co.

His pay was pegged at “850” and the email also noted that “Hunter has some office expectations he will elaborate.”

While there is no evidence that the Chinese book-buying spree constitutes any illicit kickback or bribery scheme, it does raise red flags. Federal authorities are currently investigating Hunter Biden for his taxes based largely on his Chinese business deals, although recent reports suggest that such a probe may already be compromised.