Famed MSNBC fake news anchor Brian Williams was taken by surprise when a guest decided to burst the pro-Biden bubble and take the president to task over his Afghan disaster speech on Monday.

“So, I am curious to hear your reaction of this consequential speech by the American president,” a glowing Brian Williams said. “He didn’t run from it, he owned it. He owned this decision. He owned the fact that, as he put it, ‘the buck stops with him’.”

“I hope he gets to own their deaths, too,” said Matt Zeller, co-founder of the group No One Left Behind. According to the group’s Twitter page, “No One Left Behind ensures that the United States keeps its promise to care for those who jeopardize their safety for our country.”

“I feel like I watched a different speech than the rest of you guys,” Zeller went on. “I was appalled.”

“There is such a profound bald-faced lie in that speech, the idea that we planned for every contingency,” he continued. “I have been personally trying to tell this administration since he took office, trying to tell our government for years, that this was coming.”

“We sent them plan after plan on how to evacuate these people,” Zeller added. “Nobody listened to us. They didn’t plan for the evacuation of our Afghan war-time allies. They’re trying to conduct it now at the eleventh hour.”

“We had all the people and equipment in place to be able to save these people months ago,” Zeller said. “And we did nothing. I am appalled that he thinks we only need to take 2,000 people. There are 86,000 people who are currently left behind in Afghanistan alone. We have identified all of them for the government.”

“I have no idea why he claims that people don’t want to leave Afghanistan, I have a list of 14,000 names right now of people who want to get out of Afghanistan,” he added. “And the idea that the Afghan military should be blamed for this? Do you know how many casualties the Afghan military took in an average year? More than the United States did in twenty.”

“How dare us for having to blame these people for not having the audacity to be able to survive a Taliban onslaught,” Zeller said, clearly getting heated. “No, no, no. What we need to be doing right now and what I am appalled the president didn’t say was how we are going to get every single one of these people out.”

There are harrowing reports that multiple people have been killed trying to flee the country at Kabul International Airport. Sickeningly, men predominately forced themselves to the front of the line, ahead of women and children.

Latest pictures from Kabul Airport. People are on their own now while the world watches in silence. Only sane advise to Afghan people…RUN pic.twitter.com/RQGw28jFYx

Images from inside one plane leaving the country confirm that most of those able to get on board were men. 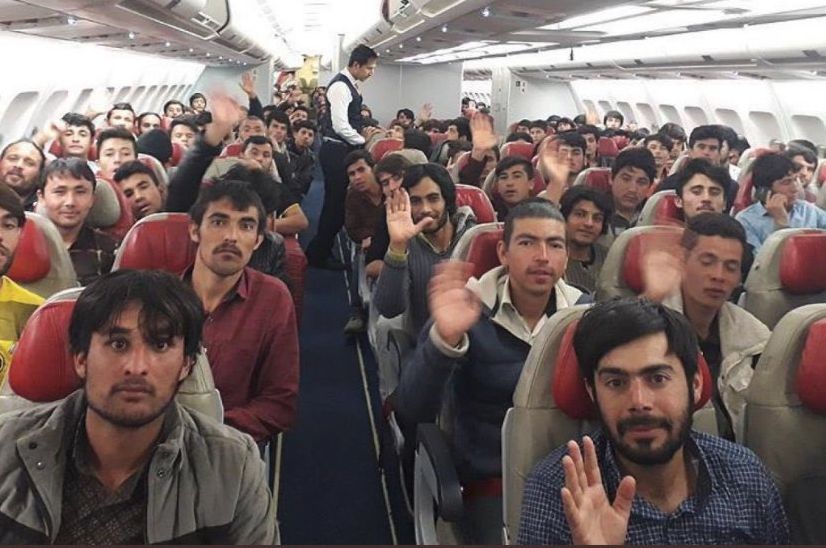 Here’s one helpful idea for the Pentagon next time the United States occupies a nation for twenty years and then decides to do a quick pullout: Evacuate the diplomats, interpreters and American staff before withdrawing U.S. military troops.

‘Where is My President?’ Woman Nearly in Tears at Pentagon Briefing Has Emotional Plea Americans Can Relate With