Two of the Gold Star Family members, Mark Schmitz and Darin Hoover, appeared on “Hannity” on Monday and gave their view of how the president handled the ceremony.

“First, I just wanted to say that Jared has exemplified so much that any man could ever strive for and made me so proud to watch him undertake this endeavor of going into the Marine Corps,” Mark Schmitz said. “He completed his boot camp. He went to Jordan, was excited about that. And was constantly looking to do more and was given that opportunity.”

“Mark, you met with Biden over the weekend, how did that go?” Hannity asked.

“Initially, I wasn’t going to meet with him,” Schmitz replied. “But then I felt I owed it to my son to at least have some words with him about how I felt, and… it didn’t go well,” Schmitz said. “He talked a bit more about his own son then we did my son and that didn’t sit well with me.”

“Your son was a hero,” Hannity commented. “I can’t imagine the pain, I really can’t. Darin, you said your son had the biggest heart in the world, and no parent, and as a parent, I think every parent watching right now understands this, no parent should have to bury their sons or daughter, it’s not supposed to work that way. He was scheduled to return home on September 15th and retire and marry his fiancée, Nicole. I can’t imagine how you’re feeling today.”

“It’s the absolute worst feeling in the world,” Darin Hoover said. “Having them be away for so long, and doing the job that they all love, there is no doubt about it. Being a Marine to these guys is everything. And having this happen to these heroes. Every one of them is a hero. Every last one of them. They died with their brothers and their sisters right next to them . Doing exactly what they all wanted to do. And that is defending this country.”

“You chose not to meet with President Biden,” Hannity said. “I don’t know if you want to comment on that. When I saw Biden look at his watch, I was literally like you’ve got to be kidding me, because all of this to me was preventable. Because we saw them on the march. You know, we had April, May, June, July, to extradite everybody and our equipment. We didn’t do it. Why did you choose not to meet with the president?” 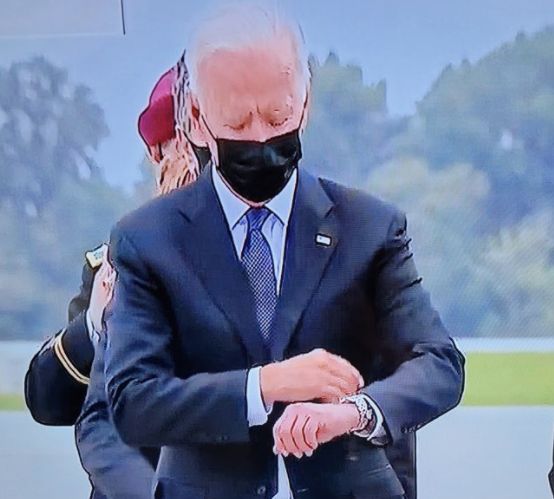 “As a father, you know, seeing that and the disrespect, and hearing from his former leaders, one of his Master Sergeants said exactly what you just said, that this was avoidable, that they left them over there,’ Hoover continued. “They let them down, we can’t have that. It can’t happen ever again.”

“We also abandoned Americans,” Hannity commented. “Americans now are on their own. We left them behind. Mark, do you want to comment on the watch incident? Did you notice the same thing?”

Staff Sgt. Taylor Hoover Jr., 31, was killed at Kabul airport on Thursday. He was on his third deployment to Afghanistan. Lance Corporal Jared Schmitz was also killed in the Kabul attack. He was just 20 years old.