Illegal Immigration is Getting So Bad Even CBS is Sounding Alarms Over Biden Border Crisis: ‘No Sign of Stopping’ 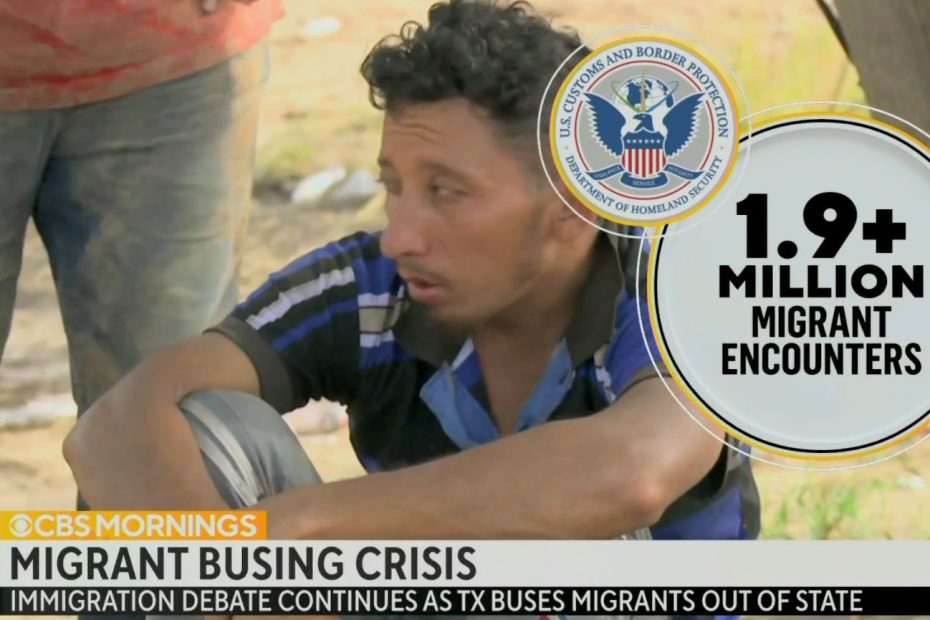 It’s getting so bad at the U.S. border with Mexico that even CBS ‘This Morning’ is sounding the alarms over “illegal immigration” that is causing a border crisis to spin out-of-control. Watch:

“There are shocking new images of migrants packed inside a tractor-trailer on the Mexican side of the U.S. border, and it’s highlighting the dangers of illegal immigration,” CBS’ Gayle King said. “Customs and Border Protection say the truck carrying 150 people was stopped by Mexican authorities before it entered the state of Texas. U.S. officials recently announced they have apprehended a record number of migrants this year. Manuel Bojorquez joins us now from near the border in Laredo, Texas, with more on that part of the story.”

“Nearly half of the people apprehended by Border Patrol this fiscal year have been sent back due to a Trump-era pandemic policy known as Title 42,” Bojorquez said. “It prohibits migrants from entering the U.S. due to the danger of communicable disease. But we spoke with many people who have qualified to proceed with a case of asylum in this country, and we got a firsthand look at their relocation process.”

“You can see shoes, bags, water bottles. Clearly, this is a route for asylum seekers and others,” Bojorquez pointed out.

“Yes, this is normally a route that they take,” said sheriff Denise Cantu.

“See, they even have a sign for them where it says ‘Siga el camino.’ So, they pretty much guide them to where they can just gather all of them and pick them up,” Cantu noted.

One of the remarkable things about CBS News’ report is that the State of Texas’ busing of illegal migrants to the State of New York may be fueling the media’s sudden interest in the border crisis.

Bill Melugun of Fox News has shared even more shocking video from the border than what CBS ‘This Morning’ aired.

NEW: Another group of approx 150 crossed illegally at sunrise this morning in Eagle Pass, TX.
A DHS source tells @FoxNews the Del Rio sector, which includes Eagle Pass, saw almost 2,000 illegal crossings in the last 24 hours, with only 19% (373) being expelled via Title 42. pic.twitter.com/fQ793fymiH

New York City Mayor Eric Adams is in a bitter feud with Texas Governor Greg Abbott over Texas’s policy. Abbott appeared on ABC News on Thursday to defend the policy.

The Department of Justice in late July filed a lawsuit against the State of Texas over the policy, claiming that it violated the Supremacy Clause. Gov. Abbott fired back by pointing out that the DOJ is not following its duty to faithfully execute the duly passed laws of the land by failing to secure the border.

“I have the authority, and duty, under the constitutions of the United States and of Texas to protect Texans and our nation,” Abbott said at the time. “I also have the authority under long-established emergency response laws to control the movement of people to better contain the spread of a disaster, such as those known to have COVID-19,” he said. “My duty remains to the people of Texas, and I have no intention of abdicating that.”

“Until President Biden and his Administration do their jobs to enforce the laws of our nation and protect Americans, the State of Texas will continue to step up to protect our communities and uphold the rule of law,” Abbott continued.

“It is clear that the Biden Administration fundamentally misunderstands what is truly happening at the Texas-Mexico border,” Abbott added. “The current crisis at our southern border, including the overcrowding of immigration facilities and the devastating spread of COVID-19 that the influx of non-citizens is causing, is entirely the creation of the Biden Administration and its failed immigration policies.”

The Biden administration has been ordered to continue enforcement of Title 42, which a federal court mandated in May.