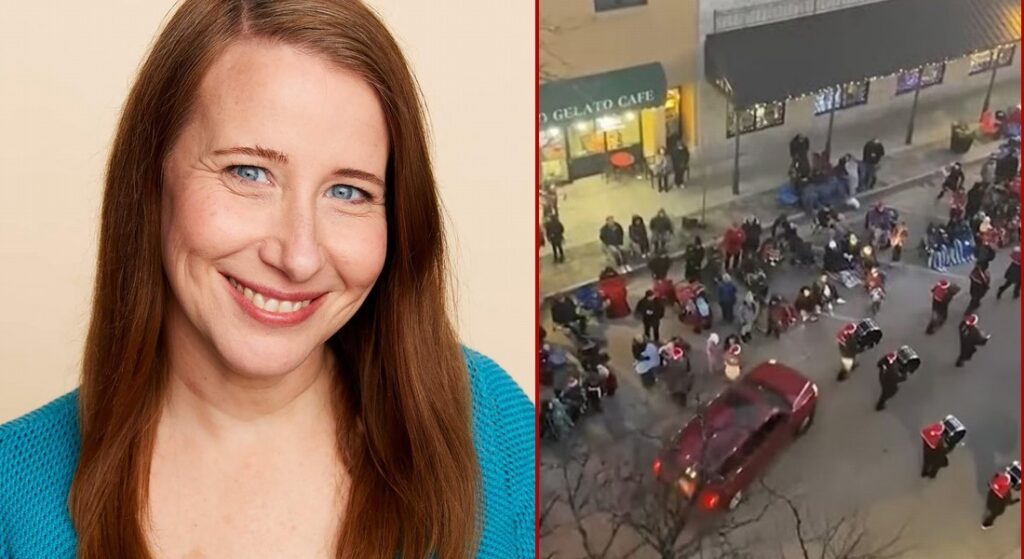 America may not only need a national divorce — it may need a restraining order as well, the way the Democratic Party is heading nowadays.

After a red SUV drove through a holiday parade in Waukesha, Wisconsin on Sunday afternoon, killing five people and injuring 40 others (including over a dozen small children) the first thought that came into an Illinois Democrat’s head wasn’t to console the victims. No, this was ‘karma’ for a jury having found that Kyle Rittenhouse had acted in self-defense when he shot three white criminals attacking him in Kenosha, which is 23 miles away from Waukesha.

Update: Multiple reports indicate that Mary Lemanski has resigned from her post following the story. Her name was scrubbed from the Democrat website where she was affiliated this morning. Story follows below.

Mary Lemanski, social media director for the Democrat Party in Illinois, has resigned her position & deleted all of her Twitter posts after expressing what many interpret as "great pleasure" over the Christmas Parade Massacre in Waukesha, WI where 5 died & 43 were hospitalized. pic.twitter.com/9HXMtrGGqK

Mary Lemanski, the social media director for the Democratic Party in Dupage County, Illinois, displayed about the most callous and insensitive reaction to the Waukesha parade attack one can imagine.

“Someone who believes in reaping what you sow,” Lemanski said about the ‘bad karma’ of the deadly parade attack. “Wisconsin put that bad energy out there. It came back real fast.” 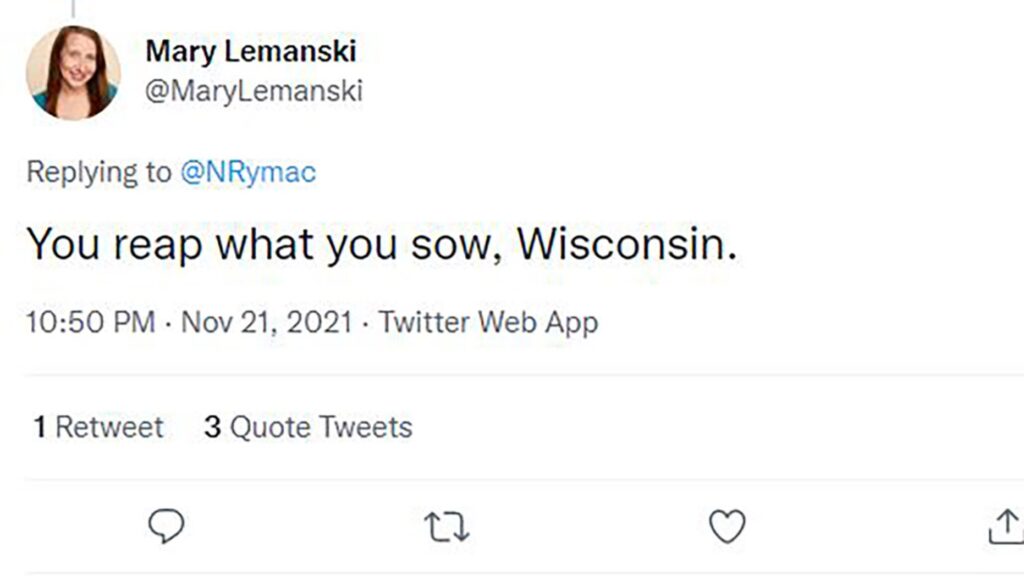 “You reap what you sow, Wisconsin,” she also said bluntly. 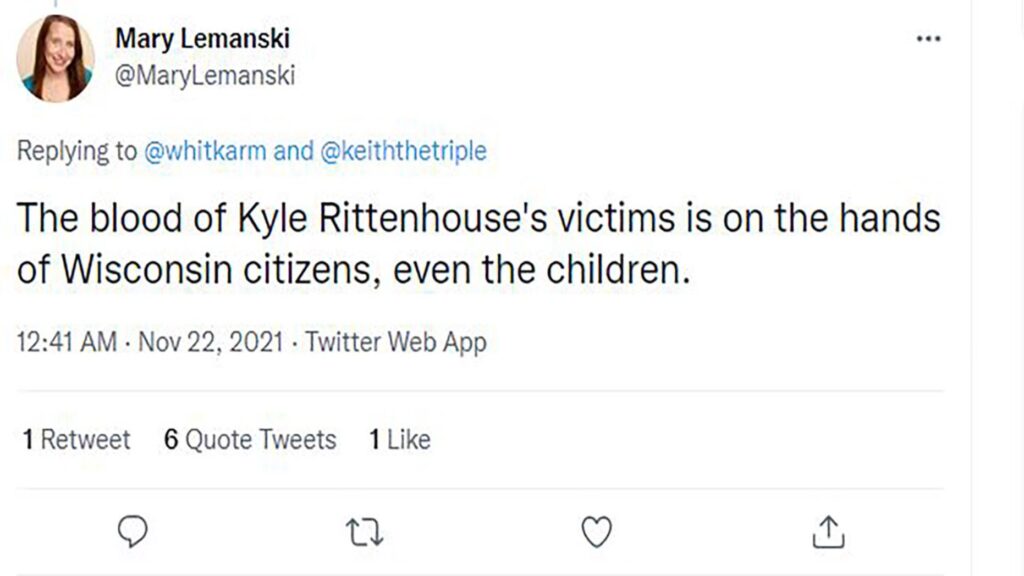 Incredibly, the Democratic operative even blamed innocent children (!) for the atrocity: “The blood of Rittenhouse’s victims is on the hands of Wisconsin citizens, even the children.”

Without re-litigating the entire case, Kyle Rittenhouse shot three white violent criminals named Anthony Huber (a criminal domestic abuser), Joseph Rosenbaum (a convicted pedophile) and Gaige Grosskreutz (an armed criminal) who attacked him, as show by high-definition footage in court. Apparently the blood of these violent criminals are on Kyle Rittenhouse’s hands, according to Lemanski.

Furthermore, Lemanski was not alone in making the snarky remark that the suspected terrorist Darrell Edward Brooks, a radical BLM activist, had acted in “self defense.” 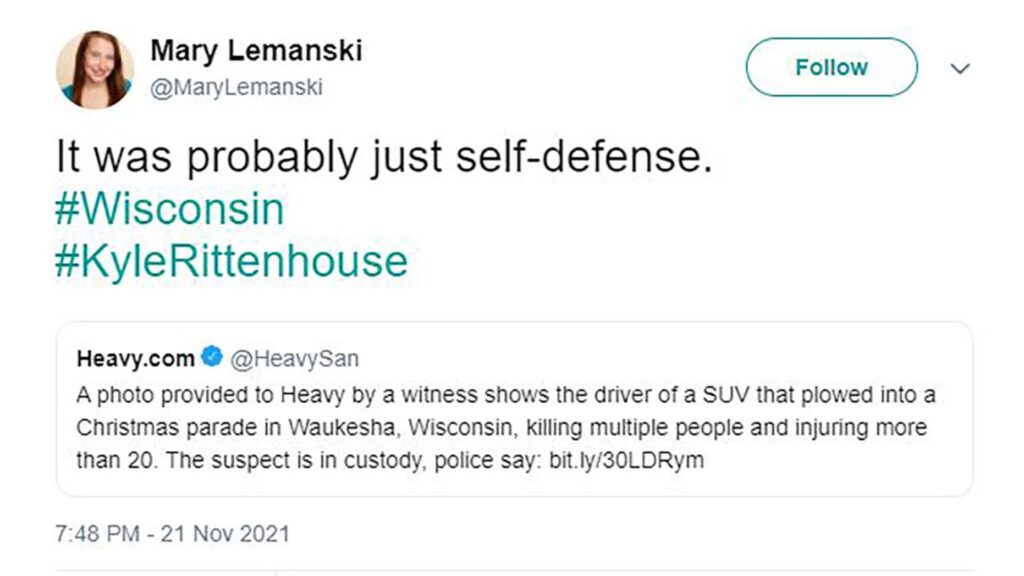 “It was probably just self-defense,” she remarked.

“Living in Wisconsin, he probably felt threatened,” she said another tweet. “I’m sure he didn’t want to hurt anyone. He came to help people,” she added.

Lemansky wasn’t alone in making such inane commentary on the deadly serious incident.

It's okay. The driver in Waukesha was afraid for his life and defending himself from the unarmed holiday crowd. That's Wisconsin law now. https://t.co/j5bhBCsc0W

Darrell Edward Brooks certainly did not appear to be ‘helping’ people when he drove into and swerved through a parade crowd. The radical BLM activist who had praised Hitler in anti-semitic posts and posted black supremacist content admitted on video that he was a sex trafficker.

Whether or not detectives conclude that Brooks had intended to drive through the parade to make a statement about the Rittenhouse verdict, or was fleeing a scene of a crime and was callously putting dozens of people in mortal danger, in the eyes of the radical left, he’s already a “victim.” That is the sick commentary from the American left nowadays, and that is why there can be no political reconciliation with such deranged people.