In late 2021, a surge in insurance claims had indicated a mysterious spike in deaths among young adults ages 18-49 years old that could not be entirely explained by the Covid pandemic.

Insurance companies were reporting an “overwhelming” and “unexplained” increase in claims for 18-49 year-olds, according to a KUSI report.

“This information became available to me or on my radar… following a hearing with Senator Ron Johnson, who was looking at sort of what he calls a second opinion on the entire response to the COVID pandemic,” Dr. Victory said. “The medical data was released by three career military physicians who got the information from the military database that collects what we call ICD codes, which are diagnosis codes. And these physicians had a feeling, they believed based on their own observation, that they were seeing a significant uptick in certain conditions.”

“So, they actually went back and called the database from the military on certain conditions over a five year period from 2016 through 2020,” she continued. “So they looked at 2016, ’17, ’18, ’19, and ’20 at the prevalence of certain conditions, including things like heart attack, blood clots, to the long miscarriages, those sorts of things. And they compared it to the incidents of those same things in the calendar year 2021, and saw an alarming increase in certain things. For example, they saw a 270% increase in myocardial infarction in 2021, a 300% increase in incidence of Bell’s palsy and of certain neurologic complaints.”

According to one insurance company, there was a 40% increase in deaths among young adults from pre-pandemic levels, despite the prevalence of Covid vaccinations that were supposed to drastically reduce overall mortality rates.

“The head of Indianapolis-based insurance company OneAmerica said the death rate is up a stunning 40% from pre-pandemic levels among working-age people,” The Center Square earlier reported.

“We are seeing, right now, the highest death rates we have seen in the history of this business – not just at OneAmerica,” the company’s CEO Scott Davison said during an online news conference. “The data is consistent across every player in that business.”

“OneAmerica is a $100 billion insurance company that has had its headquarters in Indianapolis since 1877,” The Center Square added for background. “The company has approximately 2,400 employees and sells life insurance, including group life insurance to employers nationwide.”

Davison said the increase in deaths were “huge, huge numbers,” and added that’s it’s “primarily working-age people 18 to 64” who were dying, and not just the elderly. Covid-19 is a disease that presents a mortality risk overwhelmingly to the elderly and to at-risk groups, such as the immunocompromised.

“And what we saw just in third quarter, we’re seeing it continue into fourth quarter, is that death rates are up 40% over what they were pre-pandemic,” he said.

In late January, the Epoch Times performed a multi-variate analysis of the uptick in excess deaths among young adults to try to ascertain the cause of the spike.

“Among those aged 18 to 49, mortality rose dramatically in the first half of 2020, then somewhat plateaued before increasing again in the third quarter of 2021,” analyst Petr Svab reported.

“With COVID-19 deaths being excluded and assuming drug overdoses, alcohol, and homicide deaths continued in 2021 at a similar intensity as 2019, there were still about 50,000 excess deaths in the 18-64 age group,” Svab added.

In March, the Epoch Times reported that the trend in excess deaths had appeared to “wane,” although a lag in reporting means the numbers are subject to updates and revision. 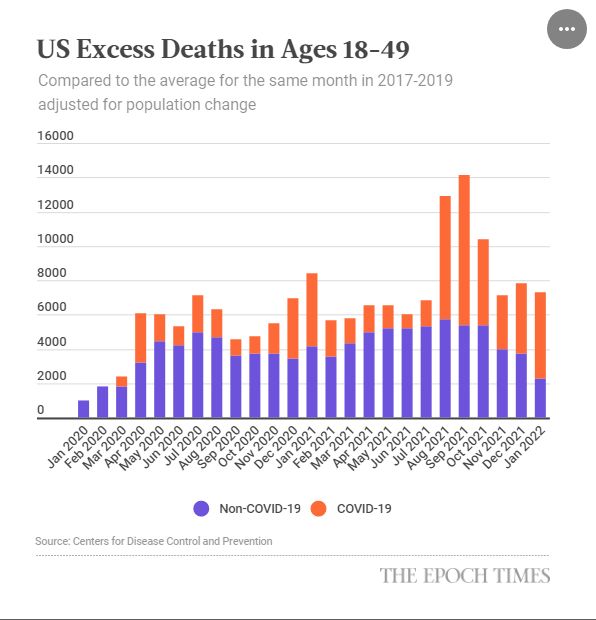 “Last year’s dramatic spike in excess deaths—mortality not attributed to COVID-19—has appeared to wane. Between October and January, the number of such deaths decreased by more than half, according to death certificate data from the Centers for Disease Control and Prevention (CDC),” the Times noted. It should be noted that the figure above depicts excess deaths compared to the same month in 2017-2019, adjusted for population.

Bottom line: This should not have happened if the vaccines were as ‘100% safe and effective’ as advertised. The vaccines’ life-saving benefits for the elderly and at-risk should have been more-than-sufficient to have lowered all-cause mortality. If the public health experts’ Covid response is to be considered ‘successful,’ the totality of their efforts should have lowered all-cause excess mortality.

Instead, all-cause deaths have remained elevated for years and there have been unexplained spikes in young adult mortality. The question is: Why?