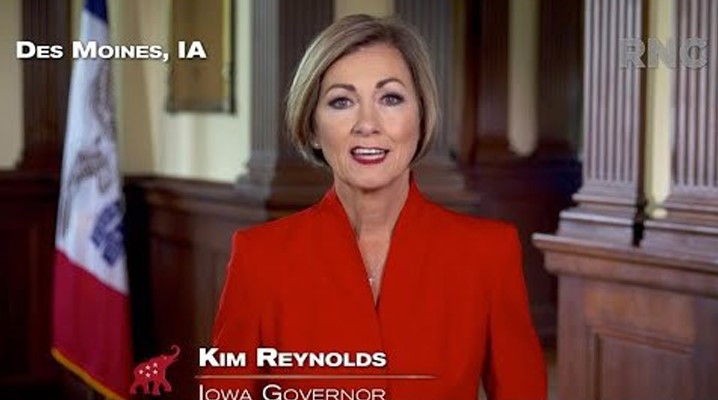 Iowa Governor Kim Reynolds signed a bill into law on Monday that puts an end to mass mail-in voting and stops the counting of absentee ballots after the polls close on Election Day.

“It’s our duty and responsibility to protect the integrity of every election,” Reynolds said in a statement. “This legislation strengthens uniformity by providing Iowa’s election officials with consistent parameters for Election Day, absentee voting, database maintenance, as well as other clear appeals process for local county auditors.”

The legislation also closes the polls an hour earlier, moving the time from 9:00 to 8:00, and shortens the time period for early voting from 29 days before the election to 20 days.

“All of these additional steps promote more transparency and accountability, giving Iowans even greater confidence to cast their ballot,” Reynolds added.

“The law also bars election officials from sending absentee voting applications to a voter if they don’t request one,” the Daily Caller reported. “The law will require absentee ballots to be received before polls close on Election Day and the ballots must be returned by either the voter, family member, household member or designated caregiver.”

The Iowa Democrats lashed out at the election integrity legislation on Twitter.

“Rather than help Iowans keep food on the table and a roof over their family’s heads, Iowa Governor and Iowa Republicans chose instead to fast-track legislation that stacks the deck in their favor and disenfranchises Iowans,” the Iowa Democrats said. “We deserve better.”

It is unclear how implementing basic rules to ensure only eligible voters vote in elections is “disenfranchising Iowans.”

“Many continue to claim that there’s no such thing as election fraud,” Paxton said in a statement. “We’ve always known that such a claim is false and misleading, and today we have additional hard evidence. This is a victory for election integrity and a strong signal that anyone who attempts to defraud the people of Texas, deprive them of their vote, or undermine the integrity of elections will be brought to justice.”

In Mississippi, a judge discovered that 84 percent of absentee ballots cast in a local election were fraudulent mail-in ballots.

“In the sixty-four-page order, Judge Jeff Weill not only calls for a new election but also finds evidence of fraud and criminal activity, in how absentee ballots were handled, how votes were counted, and the actions by some at the polling place,” CBS affiliate WCBI reported.

“In his ruling, the judge said that sixty-six of eighty-four absentee ballots cast in the June runoff were not valid and should never have been counted,” the report continued.

The Brennan Center states there are at least 253 election integrity bills in 43 states, although these bills are misleadingly framed as restricting “voter access.” The non-profit group also states there are “704 bills with provisions that expand voting access in a different set of 43 states.”

The news comes as President Biden recently issued an executive order to promote more “access” to U.S. elections. House Democrats have also launched a campaign to federalize control of U.S. elections under the bill H.R. 1.

“HR 1’s bag of tricks also includes banning state voter ID requirements,” Betsy McCaughey at the Boston Globe writes. “Anyone can show up on Election Day to vote, registered or not, and simply sign a statement that they’re a legal voter. HR 1 is being sold as a reform to make voting easier. In truth, it makes cheating easier.”

The legislation also implements no-fault absentee or mail-in ballots universally, legalizes ballot harvesting, and guts voter ID verification. The bill has an alarming 87% chance of being enacted, according to elections analyst Skopos labs.

If H.R. 1 legislation is passed, it would conflict with state’s rights to run their own elections under Article I, Section 4 of the U.S. Constitution. America would then be looking at a real constitutional crisis.