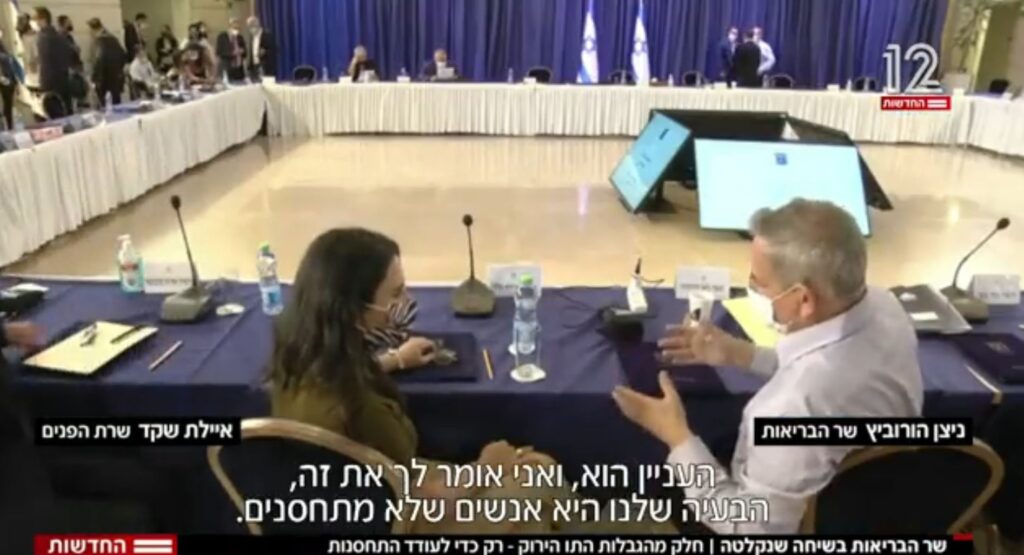 The health minister of Israel has admitted on a ‘hot mic’ that there is no “medical or epidemiological justification for the Covid passport.”

The Health Minister’s confession was captured on video and on microphone and can be watched below.

NEW – Israeli Ministry of Health (right) recorded saying to the Minister of Interior (left) "there is no medical or epidemiological justification for the Covid passport, it is only intended to pressure the unvaccinated to vaccinate".https://t.co/c3oAOpZdEE

“There is no medical or epidemiological justification for the Covid passport, it is only intended to pressure the unvaccinated to vaccinate,” Health Minister Nitzan Horowitz said in video that was aired on Channel 12.

“Several ministers were overheard prior to a cabinet meeting on Sunday saying that some coronavirus-related restrictions are only aimed at incentivizing vaccination, rather than driving down morbidity, while lamenting that the unvaccinated are taking up hospital beds,” the Times of Israel reported on the incident.

“In pools, too, not just in restaurants. Epidemiologically it’s correct,” Horowitz replied to Shaked, noting that the Covid ‘passport,’ called the Green Pass in Israel, is not particularly needed at outdoor gatherings.

“The thing is, I’m telling you this, our problem is people who don’t get vaccinated. We need that they… otherwise… we will not get out of this,” the health minister added.

The Times of Israel notes that the Green Pass currently applies to most public attractions, except malls. But the Israeli health minister didn’t want to make exceptions, “because then they will say — if not pools, then why water parks?'”

“Still, we don’t want to do things that don’t have medical justification,” he added.

There may be no such thing as “fully vaccinated” for Covid-19, Israel, one of the highest-vaccinated countries in the world, is finding out. The nation is now preparing to roll out a fourth shot in its Covid vaccination series.

“Israel is set to begin preparations to administer fourth doses of the coronavirus vaccines as the country deals with soaring cases despite its trail-blazing roll-out of jabs,” the Daily Mail reported in early September. “The country’s national coronavirus czar Salman Zarka said the country needs to prepare for a fourth injection, which could be modified to better protect against new variants of the virus.”

“Thinking about this and the waning of the vaccines and the antibodies, it seems every few months — it could be once a year or five or six months — we’ll need another shot,” he said earlier.

Israel has experienced a surge of Covid infections during a ‘fourth wave,’ despite being a relatively high-vaccinated nation. Our World in Data, a research group run from Oxford University, reported that although Israel has over a 60% “fully vaccinated” rate, it recently led the world in daily confirmed cases per million.

Thus, the vaccinations fail to stop transmission, and have become a conduit for variants, such as the “Delta variant.” Although the Covid shots wear off over time, however, the data are clear that they lower the likelihood of death and hospitalization from the Sars-CoV-2 virus.

If breakthrough cases are the norm with vaccines, then it is reasonable to ask if the vaccine is nothing more than one of a number of medical tools available for patients and doctors to manage individual Covid risk between themselves.