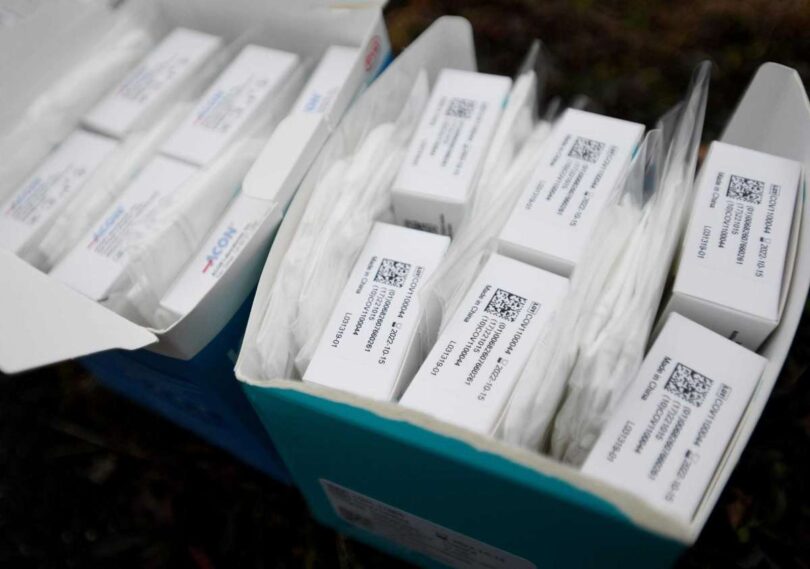 The National Institutes of Health is publicizing a new study from the American Journal of Emergency Medicine that establishes that people’s worst fears about ‘made in China’ home Covid tests were well-founded.

In January, the Biden administration announced that it was purchasing a billion tests — including those made in China — to be mailed to U.S. households  “for free.”

“To help ensure Americans have tests on hand if a need arises, the Biden Administration is purchasing one billion at-home, rapid COVID-19 tests to give to Americans for free,” the White House announced. “A half-billion tests will be available for order on January 19th and will be mailed directly to American households.”

“There will be free tests available for every household, and to promote broad access, the initial program will allow four free tests to be requested per residential address,” the statement added. “Starting January 19th, Americans will be able to order their tests online at COVIDTests.gov, and tests will typically ship within 7-12 days of ordering.”

The tests were not only flawed in terms of false positives and relatively low sensitivity, the presence of a toxic chemical has been detected in “multiple Covid-19 rapid antigen home test kits.”

“The persistence of the COVID-19 pandemic has necessitated the development and widespread availability of methods to detect the COVID-19 virus in humans,” the journal article claimed. “COVID-19 tests, which were initially only available in healthcare facility settings, are now manufactured for home use in the form of rapid diagnostic tests and generally contain a nasal swab, reagent solution, and test device (e.g., card or strip). These kits typically involve application of reagent solution to the test device; in the presence of biological material obtained from the nasal swab, this initiates a chemical reaction that produces the test result.”

“Multiple COVID-19 rapid antigen home test kids, including those manufactured by Abbott (BinaxNOW™), Beckton, Dickinson and Company (BD Veritor™), Celltrion (Celltrion DiaTrust™), and ACON Laboratories (Flowflex™), contain sodium azide as a component of the reagent solution,” the researchers added. “The reagent in some kits may contain other constituents, including Triton-X, inorganic phosphate, and Pro-Clin 300. The latter ingredients are unlikely to cause human toxicity if small amounts are ingested, but they may cause allergic reactions or local irritation after ocular or dermal exposure. However, sodium azide is well-known for its ability to cause harmful effects in humans, especially after oral exposures and potentially including the ingestion of reagent solution. Additionally, since the reagent solution packaging may include ampules that allow for application of drops of solution to the test device, inadvertent ocular sodium azide exposures can occur if the ampule is mistaken for an eyedropper.”

“Sodium azide is a water-soluble, tasteless, and odorless chemical that is commonly used as a preservative agent,” the article continued. “It is also found as a propellant in some automobile airbags; upon impact, sodium azide ignites and transforms into hydrocarbon gases that cause airbag expansion. Although data concerning acute sodium azide toxicity in humans are limited, the chemical can cause serious adverse events after oral exposure to relatively low doses. In one study, sodium azide was administered at doses of 0.65 and 1.3 mg to healthy and hypertensive individuals (for a 70-kg adult, this corresponds to a dose of 0.01 and 0.02 mg/kg). Hypotension occurred rapidly, within 45–60 s in some subjects, and lasted for 10–15 min. Despite the fall in blood pressure, reflex tachycardia was not noted, but a detailed description of other adverse events was not provided by the authors. In the same study, one hypertensive subject who received oral doses of 0.3 mg (or 0.004 mg/kg for a 70-kg individual) experienced a change in blood pressure from 183/104 mmHg pre-treatment to 115/68 mmHg post-treatment. Ingestion of higher doses of sodium azide (>700 mg or 10 mg/kg) by adults is associated with cardiac arrhythmias, metabolic acidosis, and death.”

One danger, therefore, is that certain psychologically unstable adults may be repeatedly testing themselves for Covid with these rapid antigen tests and ingesting risky amounts of sodium azide. That risk is heightened if repeatedly administered to children.

“The reagent fluid in many COVID-19 rapid antigen home test kits contains sodium azide in concentrations of 0.0125–0.0946%, and personal communication with test kit manufacturers revealed that the reagent fluid volume in these kits is small (0.3–0.625 mL),” the researchers added. “Thus, reagents with sodium azide concentrations less than 0.09–0.095% generally contain extremely low amounts of sodium azide (0.04–0.08 mg), or well below the amount expected to cause transient hypotension in adults. Kits that have reagent fluid with higher sodium azide concentrations (greater than or equal to 0.09%), including the BD Veritor™ and Celltrion DiaTrust™ testing systems, contain approximately 0.3 mg of sodium azide [10,11]. Ingestions of this magnitude may result in hypotension, decreased end-organ perfusion, and syncope. Children may experience serious adverse events after exploratory oral exposures to minimal amounts of the reagent solutions due to their smaller body size and should be monitored closely for hypotension or other sequelae after ingestion of even minute quantities of reagent fluids. Since the onset of hypotension after oral exposure to sodium azide is rapid, prolonged observation is likely unnecessary for individuals who remain asymptomatic after reagent fluid ingestion. The treatment of symptomatic sodium azide intoxication is supportive in nature and includes intravenous fluids and vasoactive medications.”

“While home COVID-19 tests have remained in short supply throughout most of the current pandemic, the United States government began offering free tests to its residents starting in mid-January 2022,” the researchers note. “Prior to this distribution of free tests, numerous cases involving oral exposure to COVID-19 home test reagent fluid were reported to United States poison centers. From June 16, 2021 through January 19, 2022, the online web POISONCONTROL® tool received 153 reports of human exposure to COVID-19 home test kits or reagents… Emergency physicians, pharmacists, and poison center staff should maintain awareness of the potential toxicities associated with ingestion of the reagent fluids and should also be prepared to treat patients who present for care after exposures to the contents of COVID-19 rapid antigen home test kits.”

A bill was submitted by Republican senators in early February to ban the import of rapid Covid-19 tests from China. It was defeated by Democrats in the Senate.

The No Taxpayer Dollars for Communist Chinese COVID Tests Act was co-sponsored by Senator Roger Marshall (R-KS)and Sen. Rick Scott (R-FL). The total bill for the rapid tests to be paid by taxpayers was $1.28 billion.

“The COVID-19 pandemic has exposed just how reliant our country is on medical supplies from China,” Marshall said. “Under President Biden, minimal actions have been taken to bring this manufacturing back to the United States and instead this administration is now sending taxpayer money to China for millions of COVID tests.”

“It is imperative that the federal government do everything in its power to complete our public health mission in a cost-effective manner that prioritizes support for domestic manufacturing,” Scott added. “Unfortunately, instead of supporting American manufacturing, the Biden administration is handing nearly $1.3 billion of taxpayer funds to a company in Communist China. The Biden administration’s willingness to fund the Communist Chinese economy, instead of the American economy, is a disgrace.”

It should come as no surprise that the same communist country that gave rise to the Covid pandemic and allowed it to spread globally without alerting people is manufacturing toxic home Covid-19 tests and selling them to its adversaries, such as the United States. One would hope that the Democratic Party would eventually get the memo that China is not Americans’ friend and certainly no one that taxpayers should be empowering with their money.