It Wasn’t a ‘Prop Gun’: Alec Baldwin Shot a Firearm That Was Being Used for Target Practice Off Set

The fallout of the Alec Baldwin shooting tragedy has led to further questions about how a “prop gun” could have fired a live round that killed the film’s cinematographer Halyna Hutchins. Furthermore, another question that has gone under the radar is how the Baldwin shooting also led to the wounding of director Joel Souza.

It wasn’t a “prop gun.” It was an actual gun that was being used as a prop. TMZ reported on the development that sources close to the filming of “Rust” indicate that the gun used in the incident was also used off-set for “target practice.”

“The smoking gun that claimed the life of Halyna Hutchins might’ve been more than just an on-set prop — it was also being fired recreationally, even when cameras weren’t rolling,” TMZ reported.

“Multiple sources directly connected to the ‘Rust’ production tell TMZ … the same gun Alec Baldwin accidentally fired — hitting the DP and director — was being used by crews members off set as well, for what we’re told amounted to target practice,” the report added.

According to the BBC, a “prop gun” could mean a range of items, “from non-functioning weapons to cap guns… But it can also mean a real weapon, or one adapted for firing blanks.” However, Hollywood should ban the term from applying to actual firearms.

A disturbing 911 call shed light on how assistant director David Halls had given Baldwin the weapon that ultimately killed Hutchins and wounded Souza. Mamie Mitchell, the script supervisor of the film, made the 911 call for help, the Daily Mail reported.

“We need an ambulance out at Bonanza Creek Ranch right now. We have had two people accidentally shot on a movie set accidentally,” Mitchell said. As she is talking to the 911 operator she instructs someone else to make certain the ambulance has access to the road.

“It sounds like somebody else is calling for ambulances,” the operator said.

“Everybody should be. We need some help,” Mitchell said. “Our director and our camerawoman has been shot.”

“So, was it loaded with a real bullet or what?” the 911 operator asks.

“I don’t, I cannot tell you that. We have two injuries from a movie gunshot,” Mitchell replies.

“While the phone operator is inputting the details, Mitchell can be heard telling someone else: “OK, this f****** AD that yelled at me at lunch asking about revisions, this motherf*****.'”

“Did you see him lean over my desk and yell at me?” Mitchell said. “He’s supposed to check the guns. He’s responsible for what happened.”

The reckless incident, which occurred under the stewardship of the co-producer Baldwin, has caused some to wonder about how the weapon could have had live ammunition when he shot it.

According to the warrant, Halls told Baldwin the weapon was “cold,” even though it was loaded with live ammunition. Halls is a veteran of the film industry and has worked as an assistant director on major productions like Fargo, The Matrix Reloaded, and Reno 911.

“The gun Halls picked up was reportedly one of three laid on a cart by the film’s armorer, Hannah Gutierrez-Reed,” The Sun reported. “It’s not clear at this time how many rounds were fired. Gutierrez-Reed, 24, is the daughter of longtime film industry armorer, Thell Reed.”

Gutierrez-Reed has reportedly deleted her major social media accounts in the aftermath of the deadly shooting.

While the shooting is believed to be an accident, there is an ongoing shooting investigation into how such a deadly incident could occur. According to the publication Variety, which reported the tragic incident on Thursday night, the shooting was chalked up by the production company as a “misfire” of a “prop gun with blanks.”

Baldwin, who was visibly devastated upon learning that the shooting had led to the untimely death of Hutchins, willingly provided a statement to the sheriff’s office.

While the production company involved claimed that there was a “misfire of a prop gun with blanks,” the Sheriff’s office indicated that it was “too soon to say what type of round was involved,” Variety reported. The Sheriff’s Office also did not use the word “accident,” the publication noted, leaving that to be determined by investigators.

“We’re treating this as we would any other investigation,” sheriff’s office spokesman Juan Ríos said about the matter.

“The prop was fired at Bonanza Creek Ranch, where filming was underway, the sheriff’s office said in an early evening news release,” the Santa Fe New Mexican reported. “The set was locked down while deputies began their investigation.”

“Attempts to get comment from Baldwin outside the sheriff’s office were unsuccessful,” the publication added.

In a statement to The New York Times, Rust Movie Productions said: “The entire cast and crew has been absolutely devastated by today’s tragedy, and we send our deepest condolences to Halyna’s family and loved ones. We have halted production on the film for an undetermined period of time and are fully cooperating with the Santa Fe Police Department’s investigation. We will be providing counseling services to everyone connected to the film as we work to process this awful event.”

Baldwin, who should again be noted is a co-producer on the film, has mocked Donald Trump and law-abiding gun owners about firearms safety in the past.

“I wonder how it must feel to wrongfully kill someone…” he tweeted.  More posts were unearthed by the Post Millenial. 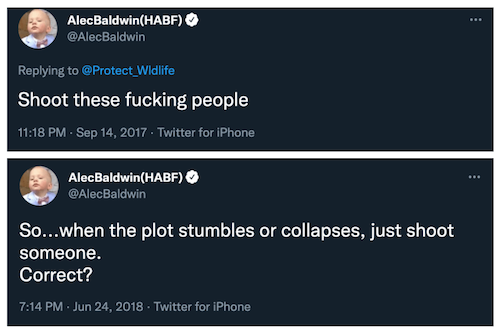 There were even more. 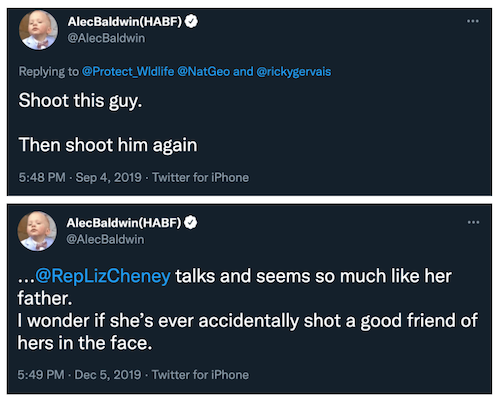 “Our hearts go out to the family of Halyna Hutchins and to Joel Souza and all involved in the incident on ‘Rust,’” the family tweeted from a Brandon Lee memorial account. “No one should ever be killed by a gun on a film set. Period.”

Mike Tristan, 60, a Hollywood armorer with three decades of experience, said that the armorer is largely to blame for the fatal incident.

“There should have been blanks in the gun, the on-set armorer’s job is to check that before handing the weapon over,” Tristan said.

Director James Cullen Bressack vowed after the tragedy that he will never use blanks on the set of any of his movies again.

“I will never use anything but airsoft and rubber guns on my movies ever again. This should never have happened. Halyna, you were a gem,” he said. “This is so f****d up.”

There is no doubt that Alec Baldwin is distraught about the shooting of Halyna Hutchins and to Joel Souza. But his emotional reaction does not absolve him of responsibility, nor of questions about the circumstances of the shooting. This is an incident that should not be swept under the rug, just because the shooter is an influential Hollywood actor.

NSBA Reverses Itself in Blow to AG Garland: Apologizes for Letter Biden’s DOJ Weaponized to Target Parents as ‘Domestic Terrorists’