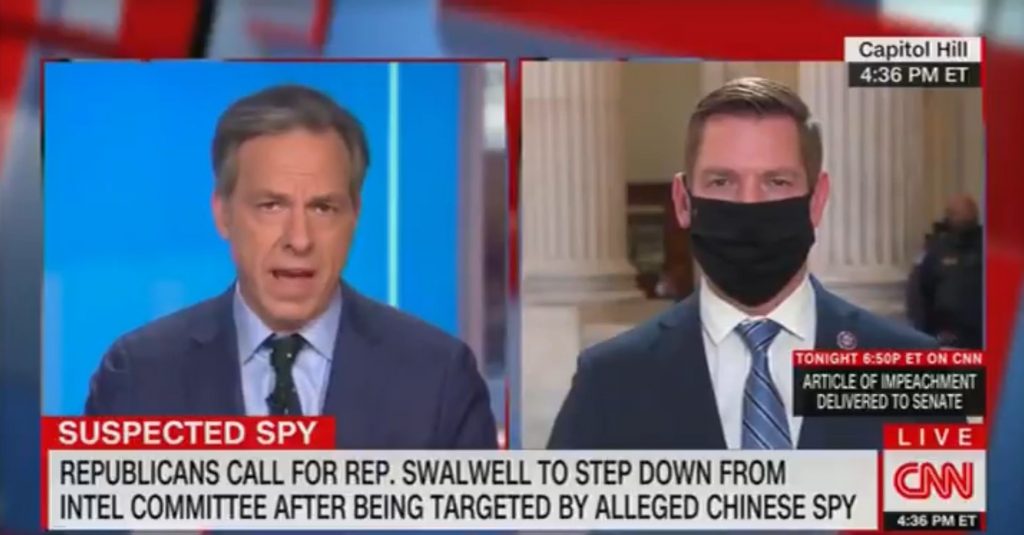 “You were informed by the FBI that you had been targeted by an alleged Chinese spy, who I guess is no longer in the country,” Tapper said. “Have you learned anything more about this case, since this broke in early December? And can you clarify how much contact you had with this Chinese national who goes by ‘Fang Fang’ or Christine Fang?”

We might have seen Swalwell cringe, if it wasn’t for the ninja-like face covering that he unnecessarily wore throughout the interview.

This was Swalwell’s scripted response: “Jake, this was a 2015 meeting, not a person that I had… as a volunteer back in 2012 on the campaign. The FBI has said that I did nothing wrong. Don’t take it from me, there was no wrongdoing. I’ve learned nothing new, and Speaker Pelosi has said that she is keeping me on the committee.”

Speaker Pelosi is not only keeping Rep. Swalwell, a Democrat from California, on the intelligence committee, she gave him a plum assignment as one of 9 impeachment managers who will be taking the House’s case against former President Donald Trump into the senate starting the week of February 8th. 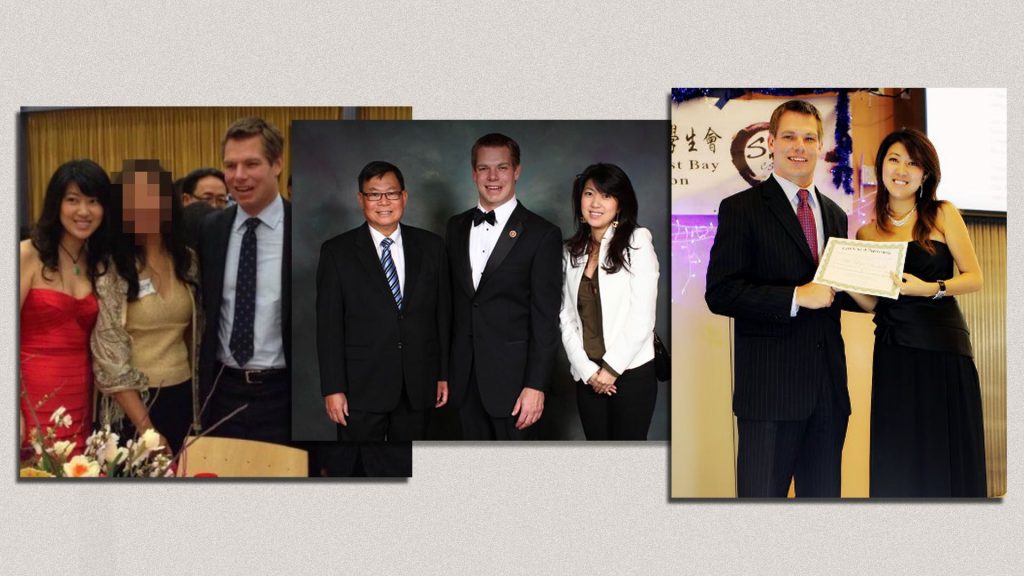 The Axios report that started it all prominently featured Rep. Swalwell and his campaign’s relations with Christine Fang:

Despite being under suspicion for his relationship with Christine Fang aka ‘Fang Fang,’ Rep. Swalwell has largely gotten a pass from the mainstream media.

The New York Post, however, points out that Swalwell may have been involved in a ‘honeytrap’ operation:

Axios reports Fang had sexual relationships with at least two Midwestern mayors; Swalwell won’t say whether he slept with the honeytrap. He interacted with her at a number of public events over the years, and she was a fundraising bundler for his 2014 re-election campaign. She even helped place an intern in his office.

So, although Tapper did not press Swalwell after his scripted answer, it is noteworthy that he was even asked the question at all, given that he will soon be trying a former president and now private citizen for what he called seditious behavior.

This is from Swalwell’s announcement of co-sposoring Articles of Impeachment against Donald Trump:

“Today, I voted to send articles of impeachment to the House of Representatives that will hold President Donald Trump accountable for his ongoing abuse of power and obstruction of Congress. Fortunately, America’s Founders did not leave the people helpless to an executive’s abuses. Our Constitution provides the power of impeachment and removal. President Trump is on a constitutional crime spree, jeopardizing our national security and the integrity of our elections. We have no choice but to act.

“No critical fact in this investigation is in dispute. And this case is no longer about what the president did. We know what Donald Trump did; he admitted it. As these articles move to the full House of Representatives, this is now about what we must do to protect our national security and our elections.”

Rep. Eric Swalwell went so far as to call Sen. Ted Cruz, Rep. Lauren Boebert and Sen. Josh Hawley out as members of the ‘Coup Klux Klan.’ This is not the brightest member of the Congress. No wonder he was a prime mark for Fang Fang.