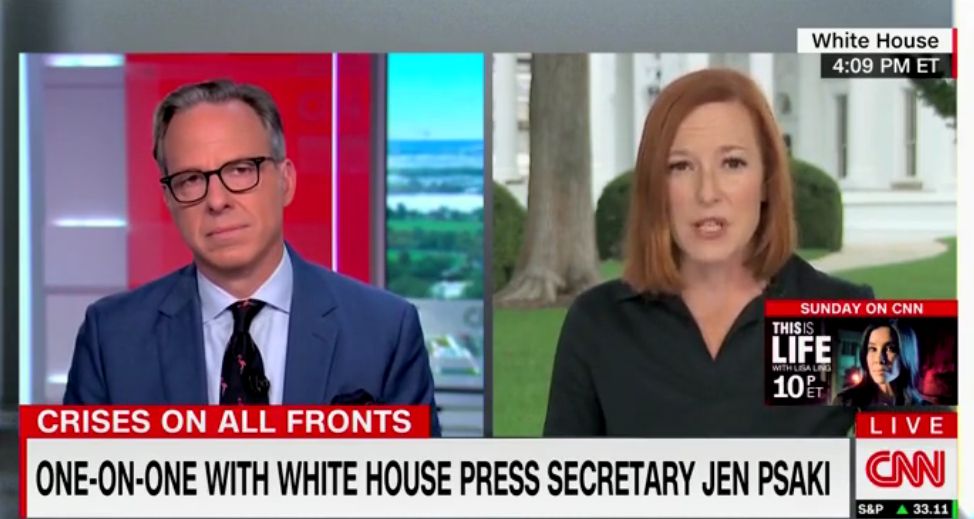 White House Press Secretary Jen Psaki had another rough outing on Friday. After getting served with an ethics complaint for violating the Hatch Act, she found herself on CNN with Jake Tapper defending the skyrocketing inflation that is stressing the budgets of working class Americans.

“Inflation is skyrocketing, as I don’t need to tell you,’ Jake Tapper pointed out. “The prices for home heating costs, cars, groceries, furniture, rent, gasoline are hitting Americans right in the wallet. The White House response has been generally to say ‘hey, inflation shows that we’re coming out of the recession, so it’s a good sign.’ President Biden’s Chief of Staff Ron Klain enthusiastically retweeted an economist who had said in part, ‘most of the economic problems we’re facing, inflation, supply chains, etc., are high class problems.’”

“Now, I get the larger point that when we’re talking about economics, we’re coming out of recession,” Tapper said. “But doesn’t it seem tone deaf to say that rising prices and empty grocery store shelves are high class problems? Isn’t that a bit dismissive?”

“Well, that’s not exactly what the tweet said nor the retweet of the original tweet, which is what we’re talking about here,” she claimed, dishonestly. “It is true, though, Jake, and economists will tell you this. And I know you’ve interviewed some of them as well, that the fact is, the unemployment rate is about half what it was a year ago. So a year ago, people were in their homes, 10 percent of people were unemployed. Gas prices were low because nobody was driving. People weren’t buying goods because they didn’t have jobs. Now more people have jobs. More people are buying goods. That’s increasing the demand. That’s a good thing.”

“At the same time, we also know that the supply is low because we’re coming out of the pandemic and because a bunch of manufacturing sectors across the world have shut down because ports haven’t been functioning as they should be,” she noted. “These are all things we’re working through. What people should know is that inflation is going to come down next year. Economists have said that, they’re all projecting that. But we’re working to attack these cost issues that are impacting the American people every single day. But there’s different issues in different sectors and many of the ones you mentioned.”

Inflation is a “high class” problem. It’s actually a “good thing.” Supply chain problems are something they are “working through.” Packages might not be delivered by Christmas. ‘Empty shelves’ Joe is just a fact of (socialist) American life. Carry that same energy into the midterms, Democrats.