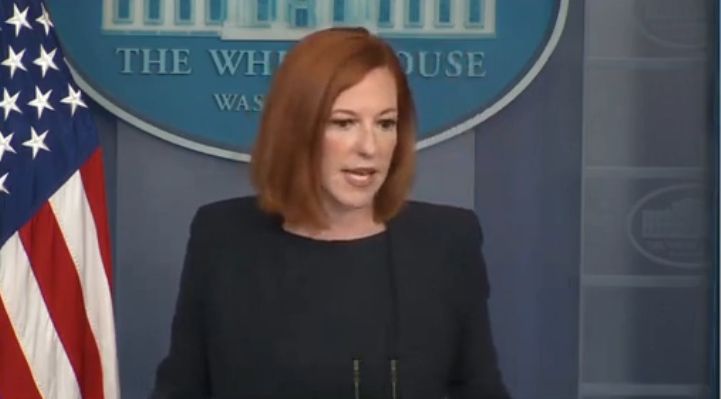 White House Press Secretary Jen Psaki once again had to dig down deep to frame America’s election integrity laws as worse than Jim Crow laws. On Monday, she came up with a new one: It’s as bad as America’s Civil War. No, really. Watch:

“Sure. Well, first — well, thank you for the question, because he’s very focused on the speech tomorrow, one that he himself wanted to deliver,” Psaki responded. “He’ll lay out the moral case for why denying the right to vote is a form of suppression and a form of silencing and how he will use — he will redouble his commitment to using every tool at his disposal to continue to fight to protect the fundamental right of Americans to vote against the onslaught of voter suppression laws based on a dangerous and discredited conspiracy theory that culminated in assault on our Capitol.”

This is egregiously dishonest. State election integrity laws are designed to ensure that one American citizen that already possesses the right to vote casts only one vote in the state holding the election. That is all it is about.

“He’ll call out the greatest irony of the big lie is that no election in our history has met such high standard with over 80 judges, including those appointed by his predecessor, throwing out all challenges,” she said, omitting that most of those cases were thrown out on lack of standing issues. “He’ll also decry efforts to strip the right to vote as authoritarian and anti-American and stand up against the notion that politicians should be allowed to choose their voters or to subvert our system by replacing independent election authorities with partisan ones.”

“And he will highlight the work of the administration against this, the necessity of passing the For the People Act and the John Lewis Voting Rights Advancement Act and how we need to work together with civil rights organizations to build as broad a turnout and voter education system to overcome the worst challenge to our democracy since the Civil War,” she said brazenly.

“The Department of Justice has already used tools to fight against these laws in states,” she stated. “They will continue to. He’ll talk about that as well, but the last piece is he will talk about also the importance of empowering, engaging and supporting efforts around the country to make sure people know their rights and understand how to participate in the process.”

It is amazing that after one of the highest-recorded turnout elections in American history, one that has the incumbent president reported as having 74.2 million votes, and the challenger astonishingly amassing over 81 million votes, that the Democratic Party would claim simply verifying that every adult U.S. citizen has only one vote is mass ‘voter suppression.’

The Democratic Party’s over-the-top hysterics about basic election integrity laws that either return the situation to pre-pandemic norms or institute identity checks commonplace in nations around the world is highly telling.