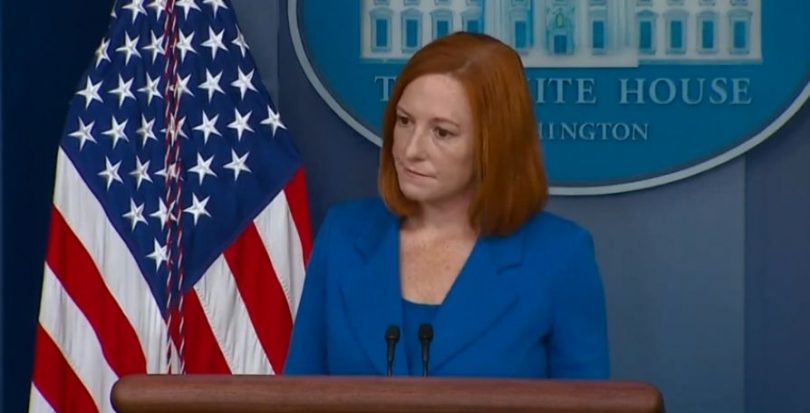 When Jen Psaki was asked about Gold Star Family members’ complaints regarding Biden checking his watch repeatedly, she did the only thing she really does in such situations. She swallowed hard and then dodged answering the question completely. Watch:

“There was a father of one Marine who said that the President appeared to be checking his watch every time a flag-draped transfer case came out of the plane,” she continued. “And a sister of another Marine said that it felt like a fake and scripted apology. Was the President looking at his watch, and does he have a message to those people who felt that they were offended?”

“I would say his message to all of the family members who were there, those who were not even in attendance, is that he is grateful to their sons and daughters, the sacrifice they made to the country, that he knows firsthand what it’s like to lose a child, and the fact that no one can tell you anything or say anything, or there’s no words that are going to fill that hole that is left by that,” Psaki replied.

“He’s not going to speak to, and I’m not going to speak to the private conversations. Of course, they have the right to convey whatever they would like, but I will tell you from spending a lot of time with him over the past couple of days that he was deeply impacted by these family members who he met just two days ago, that he talks about them frequently in meetings and the incredible service and sacrifice of their sons and daughters,” she added. “That is not going to change their suffering, but I wanted to convey that still.”

Psaki, of course, was indirectly alluding to the reaction of several Gold Star Family members to President Biden’s “disrespectful” behavior at the ceremony. Two parents of the fallen appeared on “Hannity” on Monday night to express their disbelief at Biden’s watch-checking antics.

“I leaned into my son’s mother’s ear in I said ‘I swear to god if he checks his watch one more time’ and that was probably only four times in, I couldn’t look at him anymore after that,” added Mark Schmitz. “Considering the time and why we were there, I found it to be the most disrespectful thing I’d ever seen.”

One anguished mother, named Shana Chappell, mother of Marine Lance Cpl. Kareem Nikou, also expressed shock and outrage at the Commander-in-Chief over his behavior at their private meeting.

It appears that Biden’s ‘more important’ event was preparing to shout at the American people on Tuesday for his administration’s mistakes. He was nearly two hours late to that event. So it looks like President Biden doesn’t even know how to use his watch, anyways.

Biden Turns His Back After Shouting Angry Speech at Americans, Then Comes Back for One Last Thing