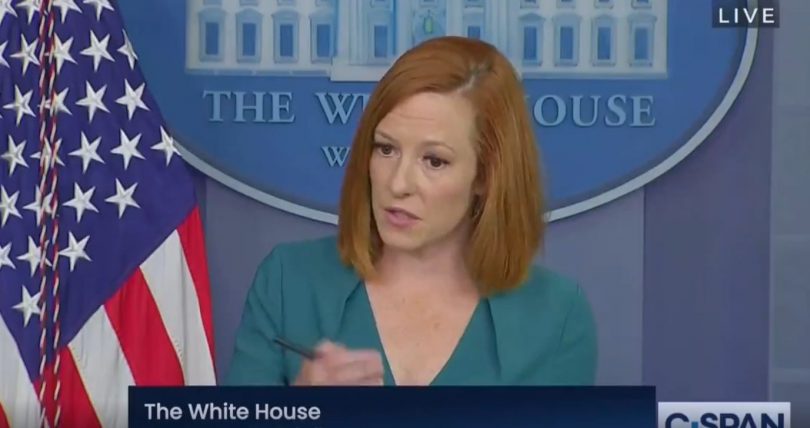 The Biden administration is so confident in the COVID vaccines working that it is already discussing the potential of state lockdowns. Again.

“If the number of cases continues to trend upward, are there any circumstances under which the White House might reimpose some of those restrictions?” a reporter asked. “As cases tick up or would that be up to the states?”

“Well, states are going to have to make evaluations and local communities are going to have to make evaluations about what’s in their interests,” Psaki responded. “And, as you know, there are much higher rates of vaccinations in some parts of the country over others. So, we certainly support their decisions to implement any measures that they think will help their communities stay safe.”

In concert with the Biden administration is a “news” media that has been fearmongering Greek-letter-designated ‘variants’ like Delta (99.9% case survival rate) and now Lambda. What’s next, Omega Mu?

The White House press secretary’s remarks are predictably tone-deaf and oblivious to the stacks of research that show lockdowns don’t work. Texas and Florida, among other states, singlehandedly displayed that Emperor Fauci ‘has no clothes’ when it comes to lockdowns and mask mandates. Pardon the imagery.

More importantly, however, is comprehensive data from non-partisan sources that illustrate how pointless and destructive the state lockdowns have been.

“The huge collateral damage of lockdowns is becoming clear. Global unemployment has spiked. Hundreds of millions of children have missed school, often for months. Families have been kept apart. And much of the damage is still to come,” The Economist recently noted.

“A recent paper by Francesco Bianchi, Giada Bianchi and Dongho Song suggests that the rise in American unemployment in 2020 will lead to 800,000 additional deaths over the next 15 years, a not inconsiderable share of American deaths from covid-19 that have been plausibly averted by lockdowns,” the report continued. “A new paper published by America’s National Bureau of Economic Research (nber) expects that in poor countries, where the population is relatively young, the economic contraction associated with lockdowns could potentially lead to 1.76 children’s lives being lost for every covid-19 fatality averted, probably because wellbeing suffers as incomes decline.”

“Research is more divided over the second uncertainty: the benefit of lockdowns, or the extent to which they reduce the spread of, and deaths from, covid-19,” the report adds. “The fact that, time and again, the imposition of a lockdown in a country was followed a few weeks later by declining cases and deaths might appear to settle the debate. That said, another recent nber paper failed to find that countries or American states that were quick to implement shelter-in-place policies had fewer excess deaths than places which were slower to act. A paper published in the Proceedings of the National Academy of Sciences, a scientific journal, by Christopher Berry of the University of Chicago and colleagues, cannot find “effects of [shelter-in-place] policies on disease spread or deaths”, but does find “small, delayed effects on unemployment”.

It is the job of the White House to lead on policy. If many COVID restrictions are needlessly damaging to the public and the economy, then it should say so. Instead, it makes vague, disturbing comments at press conferences that alert Americans can interpret as ‘foreshadowing.’