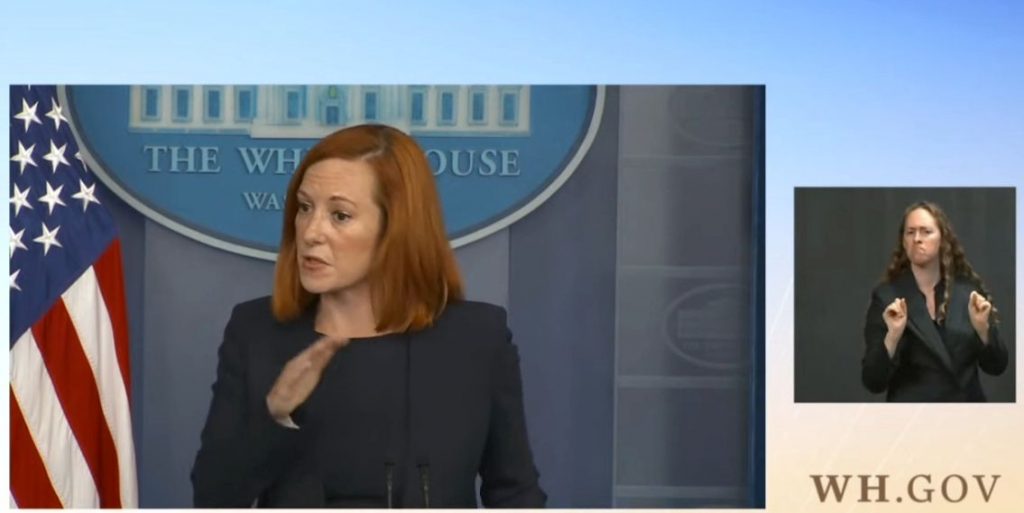 Jen Psaki returned from a pre-empted vacation on Tuesday to address the Aghanistan disaster in the absence of President Joe Biden, who is still at Camp David.

The White House Press Secretary faced an unprecedented onslaught from reporters on the Biden administration’s ‘failure’ to evacuate diplomats, interpreters, and American civilians from the war-torn country in an orderly military withdrawal. Watch:

“There has been some criticism from Democratic lawmakers on Capitol Hill — Mark Warner, Bob Mendendez — Menendez saying, ‘I am disappointed the Biden administration did not accurately assess the implications of a rapid withdrawal. What is the White House’s response to those lawmakers?” CNN’s Kaitlan Collins asked.

“I would first say that we did assess early on, when the president asked for a clear-eyed assessment, that there would be impacts and there would be consequences for making the choice he made,” Psaki replied.

“He also acknowledged yesterday, and I would just reiterate, this has happened more rapidly than we had anticipated here,” she continued. “Than anyone anticipated, I think that accounts for members of Congress and people who are on the ground in Afghanistan.”

Of course, this is not true. The Biden administration was warned about the dangers of a rapid withdrawal from Afghanistan without securing a proper evacuation in advance. Mark Zeller, an ex-CIA analyst, appeared on MSNBC in the wake of Biden’s speech on the Afghanistan withdrawal and stated that the administration had been warned multiple times in advance, but no one listened.

“There is such a profound bald-faced lie in that speech, the idea that we planned for every contingency,” Zeller said. “I have been personally trying to tell this administration since he took office, trying to tell our government for years, that this was coming.”

“We sent them plan after plan on how to evacuate these people,” Zeller added. “Nobody listened to us. They didn’t plan for the evacuation of our Afghan war-time allies. They’re trying to conduct it now at the eleventh hour.”

Psaki was peppered with more questions from the press corps, which did not appear to be buying the White House line.

“Sort of to follow on Kaitlan’s question about criticism from people who are your allies and your friends,” another reporter spoke up. “David Axelrod has called you the best press secretary in his lifetime, I think. But he’s also said the events of the last weekend, and this is paraphrasing here, but ‘indefensible.’ He said, ‘you can’t defend them.'”

“And he’s also said that basically you should acknowledge it was a ‘failure’,” the reporter added. “And be willing to say that the events of the last several days were a failure.”

Jen Psaki wasn’t willing to do that. But the reporters grilling the Biden administration’s press conference today might as well have said it for them.

The entire White House press conference showed more impatience and borderline hostility towards the Biden administration than perhaps at any time during a Democratic presidency in recent history. The tide is beginning to turn against the Biden presidency when even the mainstream media are beginning to see is a failure.