CNN’s Jim Acosta is a legend in his own mind.

Since the Trump presidency was the best thing to have ever happened to CNN, life after Trump has been hard for Jim Acosta.

Let’s briefly recap a few of Jim Acosta’s cringiest moments that gained him an ounce of infamy under the Trump administration.

In November 2018, fter Jim Acosta grandstanded about Trump calling the southern border crossings an “invasion,” Trump had to lecture him like a schoolchild, calling him a “rude, terrible person.” As if to prove Trump’s point, when a female staffer tried to pry the mic out of Acosta’s hand, he continued to resist.

We stand by our decision to revoke this individual’s hard pass. We will not tolerate the inappropriate behavior clearly documented in this video. pic.twitter.com/T8X1Ng912y

This caused a huge flare-up over whether or not “she touched him,” as Acosta claimed. In any event, he had his “hard pass” pulled over the mic kerfuffle.

In another humiliating moment, Jim Acosta went to the southern border in January 2019 to expose the Trump administration’s efforts to build a wall as unnecessary.

What Acosta actually did, however, was prove “walls work.”

I found some steel slats down on the border. But I don’t see anything resembling a national emergency situation.. at least not in the McAllen TX area of the border where Trump will be today. pic.twitter.com/KRoLdszLUu

“I found some steel slats down on the border,” he tweeted. “But I don’t see anything resembling a national emergency situation.. at least not in the McAllen TX area of the border where Trump will be today.”

Congrats, Acosta. You played yourself. Finally, on the topic of COVID, Acosta confronted Donald Trump in March 2020 on his positive rhetoric about the long-term prognosis for the pandemic.

“If you look at those individual statements, they are all true,” Trump insisted. “Stay calm. It will go away. You know it is going away? And it will go away and we will have a great victory. And it is people like you and CNN that say things like that — it is why people just don’t want to listen to CNN anymore. You could ask a normal question. The statements I made are I want to keep the country calm. I don’t want panic in the country. I could cause panic much better than even you. It would make you look like a minor league player.”

He went on, before telling Acosta, “Instead of asking a nasty, snarky question like that, you should ask a real question, and other than that, I am going to go to somebody else.”

Jim Acosta is very proud of his track record of getting dressed down by the President of the United States. In fact, he was so proud that the egomaniac made himself a T-shirt paying homage to his own greatness. Then he wore it to make a theatrical display of getting a vaccine shot. Then he got a photo of himself wearing it.

Turn the cringe up to a maximum.

Jim Acosta actually wore this shirt to get vaccinated. I’m serious. This is real. pic.twitter.com/FhYIKb7cPp 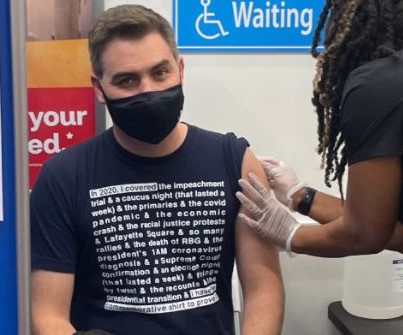 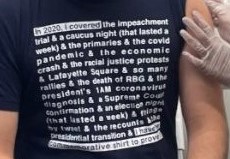 “In 2020, I covered the impeachment trial & a caucus night (that lasted a week) & the primaries & the covid pandemic & the economic crash & the racial justice protests & Lafayette Square & so many rallies & the death of RBG & the president’s 1AM coronavirus diagnosis & a Supreme Court confirmation & an election night (that lasted a week) & [illegible] by tweet & the recounts & the presidential transition & I have a commemorative shirt to prove it.”

What do you want? A participation trophy? All of us editors, producers, and reporters covered these things.

No wonder CNN’s ratings are down 50% in its key demos after only few months. Maybe that will prove to be a much-needed ego-check for Acosta and the rest of his network.