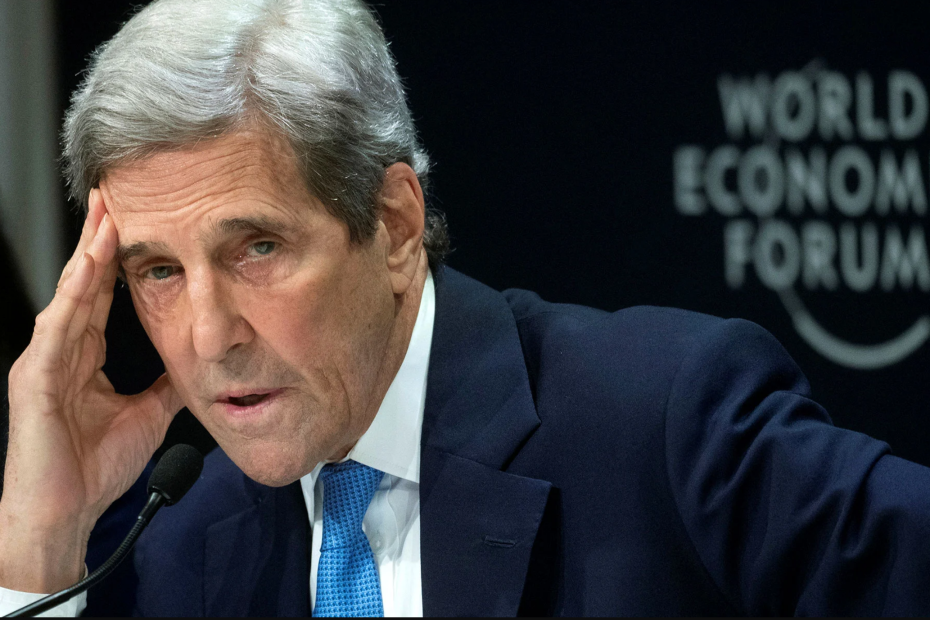 ‘Climate Czar’ John Kerry has been at the forefront of the Biden administration’s push to force Americans to have ‘net zero’ emissions by 2050. But a new report shows that Kerry alone has produced millions of pounds of carbon emissions during his time in office — most of it on unnecessary air travel.

A Washington Free Beacon analysis published on Thursday found that John Kerry has flown more than 180,000 miles during his time as ‘Climate Czar,’ and thus emitted more than 9.5 million pounds of carbon.

The Free Beacon reviewed 75 of Kerry’s official travel announcements from March 2021 to July 2022, which show Kerry has flown roughly 180,100 miles—the equivalent of traveling around the world more than seven times—to discuss climate change with various world leaders. Planes on average produce 53.3 pounds of carbon dioxide per mile traveled, according to carbon emissions modeling website BlueSkyModel, meaning Kerry’s flights have produced 9.54 million pounds, or 4,772 tons, of carbon—roughly 300 times the average American’s carbon footprint for an entire year. From May 13, 2021, to May 19, 2021, for example, Kerry traveled to Rome, London, and Berlin before returning stateside. Those flights total roughly 10,100 miles and 538,000 pounds of carbon.

The Free Beacon adds related background on Kerry’s statements on climate change, as well as his routine travel.

It’s unclear how many miles Kerry will have to fly to solve climate change, an issue he’s called an “existential … crisis.” It’s also unclear exactly how Kerry flies to each location to perform his official duties as climate czar. His office told Fox News that he flies “commercially or via military air in his role as Special Presidential Envoy for Climate,” but Kerry’s press releases do not reveal which option is utilized for each individual trip. The top Biden official’s government Twitter account has posted photos of Kerry using electric buses and scooters but has not shared snapshots of his plane travel.

Kerry’s office did not return a request for comment on additional travel details and whether Kerry could conduct any of his international meetings virtually.

As Climate Czar, Kerry is a public spokesperson for the Biden administration’s carbon emissions goals, which we will generously characterize as “ambitious.”

Per a Biden fact sheet issued in December 2021, the president issued an executive order that directs the federal government to use its scale and procurement power to achieve five ambitious goals:

In California, a state that has been at the forefront of the nation’s war on fossil fuels and nuclear energy, the electric grid is currently strained to handle the energy demands of the state.

“This is a man-made energy failure and the blame lies squarely with President Biden, Gov. Newsom and every other proponent of this green failure,” Daniel Turner, the founder and executive director of energy group Power The Future, said on Wednesday. “California is the poster child of the green movement and the state’s struggling families are paying the price.”

California temporarily turned to natural gas supplies to help meet the energy production shortfall during the recent heatwave, Fox Business reported. Both natural gas and nuclear energy have nearly zero carbon emissions, but they have nonetheless been targeted by radical environmentalists for elimination.

In related news on John Kerry, the former Secretary of State for Obama was targeted by the Trump administration for legal action, the Hill reported on Thursday.

“In May 2018, the Justice Department told Berman’s office it would be investigating Kerry’s Iran-related conduct, Berman details in his new book ‘Holding the Line,’ out Tuesday, according to the Times,” the report noted.

“The request came days after Trump publicly attacked Kerry on Twitter over the Iran nuclear deal, which he helped negotiate as head of the State Department in the Obama administration, Berman said. Trump withdrew the U.S. from the accords around the same time,” the report added.

The International Atomic Energy Administration (IAEA) on Wednesday found that Iran had enough enriched Uranium to produce a bomb and could not guarantee that the nation’s ambitions were “exclusively peaceful.” The Iran nuclear deal in 2016 is considered by some legal scholars to be have been unconstitutional, since it usurped the Senate’s treaty-making powers.