The federal judge who signed off on the search warrant for the FBI to conduct an unprecedented raid on former President Donald Trump’s estate in Mar-A-Lago has ordered the Justice Department to produce a copy of the warrant by August 15.

Federal Magistrate Judge Bruce Reinhart ordered the DOJ to “file a Response to the Motion to Unseal” the warrant after Times-Union, an Albany, N.Y. newspaper, and conservative legal group Judicial Watch filed a motion to unseal the search warrant.

“Upon information and belief, agents with the Federal Bureau of Investigation, through the United States Attorney’s office, applied for and received a search warrant in connection with an investigation that involved the residence of Donald J. Trump in Palm Beach, Fla.,” a letter on the motion states. “On Aug. 8, 2022, a search was executed at the aforementioned residence, at 1100 South Ocean Boulevard, Palm Beach, Fla., by the FBI in plain sight of the public.”

“In addition, Mr. Trump issued a public statement on Aug. 8, 2022, stating, in part: ‘These are dark times for our Nation, as my beautiful home, Mar-A-Lago in Palm Beach, Florida, is currently under siege, raided, and occupied by a large group of FBI agents. … After working and cooperating with the relevant Government agencies, this unannounced raid on my home was not necessary or appropriate.”

“The aforementioned search warrant(s) — and return documents denoting the items seized (once returned to the court) —are filed under seal with the U.S. District Court Clerk’s office,” the letter adds. “I am filing this request seeking the unsealing request of these court records.” The letter was signed by Brendan J. Lyons, Managing Editor of the Times Union.

The New York Times confirmed on Thursday that a subpoena had been served to Donald J. Trump this spring and was predicated to the FBI’s raid.

“Former President Donald J. Trump received a subpoena this spring in search of documents that federal investigators believed he had failed to turn over earlier in the year, when he returned boxes of material he had improperly taken with him upon moving out of the White House, three people familiar with the matter said,” the Times reported.

“The existence of the subpoena helps to flesh out the sequence of events that led to the search of Mr. Trump’s Florida home on Monday by F.B.I. agents seeking classified material they believed might still be there, even after efforts by the National Archives and the Justice Department to ensure that it had been returned,” the Times noted.

“The subpoena suggests that the Justice Department tried methods short of a search warrant to account for the material before taking the politically explosive step of sending F.B.I. agents unannounced to Mar-a-Lago, Mr. Trump’s home and members-only club,” the report continued.

However, Trump attorneys argued that the subpoena only further confirmed that Donald Trump had cooperated with authorities prior to the unannounced raid.

“The subpoena was first disclosed by John Solomon, a conservative journalist who has also been designated by Mr. Trump as one of his representatives to the National Archives,” The Times noted.

“The existence of the subpoena is being used by allies of Mr. Trump to make a case that the former president and his team were cooperating with the Justice Department in identifying and returning the documents in question and that the search was unjustified,” the report continued.

The New York Times corroborated earlier reports here that the FBI was searching for documents that were “sensitive in nature” and were “related to national security.”

“Two people briefed on the classified documents that investigators believe remained at Mar-a-Lago indicated that they were so sensitive in nature, and related to national security, that the Justice Department had to act,” the Times reported.

“The subpoena factored into a visit that Jay Bratt, the Justice Department’s top counterintelligence official, made with a small group of other federal officials to Mar-a-Lago weeks later, in early June, one of the people said,” the report added.

Former Trump Chief of Staff Mark Meadow invoked the Privacy Act regarding documents pertaining to the FBI’s Crossfire Hurricane operation on January 20 in a Memorandum for the Attorney General.

The Meadows memo is posted for viewing below. It should be read in full, because it contains essential background that may explain the ambiguity about whether or not Donald Trump ‘complied’ with the subpoeana. 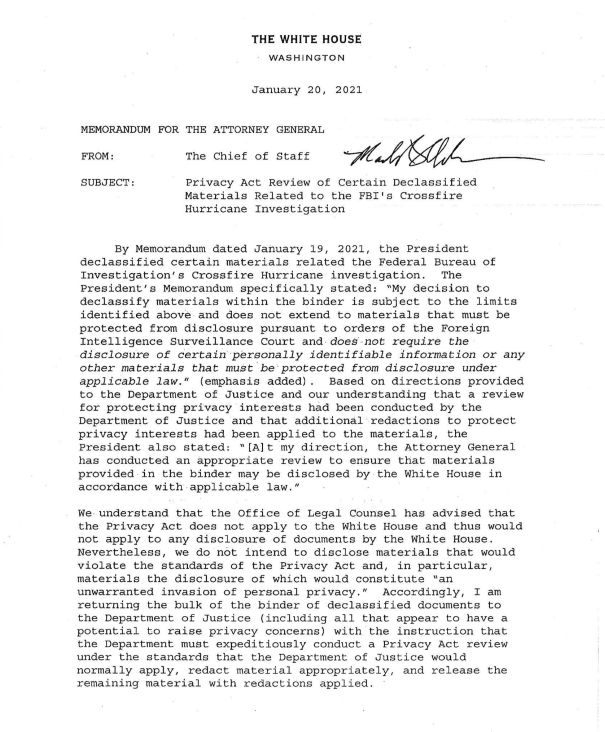 The FBI sent 30 agents to conduct a nine-hour raid and filled up 12 boxes that were left on a two-page manifest. That manifest has not been made publicly available, but the Times and other media organizations are seeking to have it unsealed.