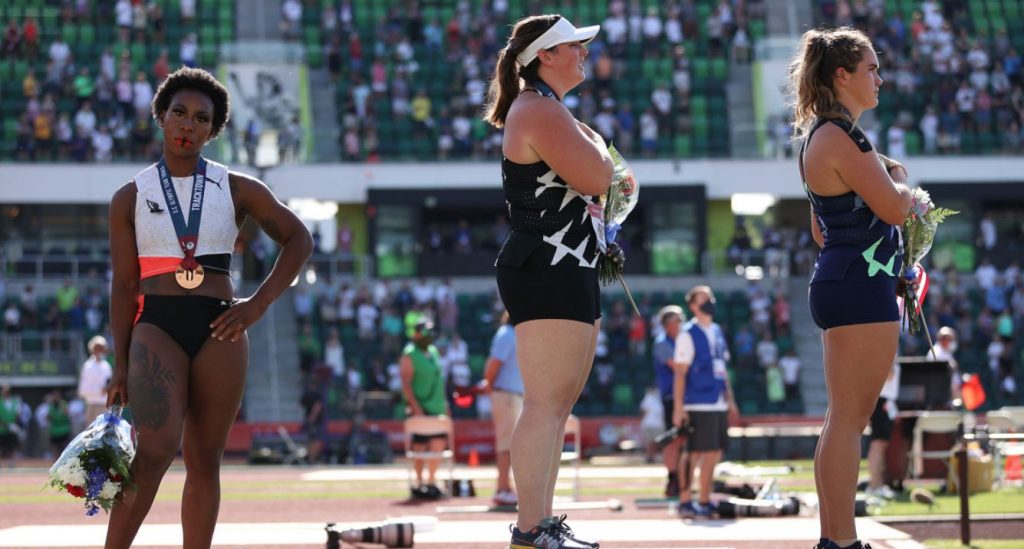 The scene: The 2021 Olympic trials for Team America in Oregon. The complainant: Gwen Berry, hammer thrower. The offense: The United States daring to play its National Anthem.

Or perhaps, just throwing this out there, maybe you are the one disrespecting the nation’s anthem? After all, millions of Americans fought for your rights and freedoms, including the right to participate in its Olympics.

Berry then suggested that the national anthem players were out to get her.

“They had enough opportunities to play the national anthem before we got up there,” Berry said at the trials. “I was thinking about what I should do. Eventually I stayed there and I swayed, I put my shirt over my head.”

‘”I didn’t really want to be up there,” she said. “Like I said, it was a setup. I was hot, I was ready to take my pictures and get into some shade.”

“They said they were going to play it before we walked out, then they played it when we were out there,” Berry continued. “But I don’t really want to talk about the anthem because that’s not important. The anthem doesn’t speak for me. It never has.”

That is Berry’s right to feel animus for her own nation, regardless of arguments that she should be more grateful for the opportunities it is affording a world-class athlete like herself. But as has become a cliche, she has a social justice message that is meant to transcend attaining glory for her country.

There is just one little problem with Berry’s conspiratorial account. As reported by the NY Post, a USA Track and Field rep ‘disputed Berry’s characterization of the anthem playing.’

“The national anthem was scheduled to play at 5:20 p.m. today,” spokeswoman Susan Hazzard said. “We didn’t wait until the athletes were on the podium for the hammer throw awards. The national anthem is played every day according to a previously published schedule.”

That’s right. There was a previously published schedule to play the anthem at the time she took the podium. Berry, by the way, took third at the hammer-throw event.

It looks like Gwen Berry will have to reexamine her blame of the Olympic trials for daring to play the U.S.’s national anthem. Maybe she can blame the pre-published schedule on ‘structural racism.’

Trump Calls Biden a ‘Puppet President,’ Doesn’t Know ‘What the Hell’ He is Signing