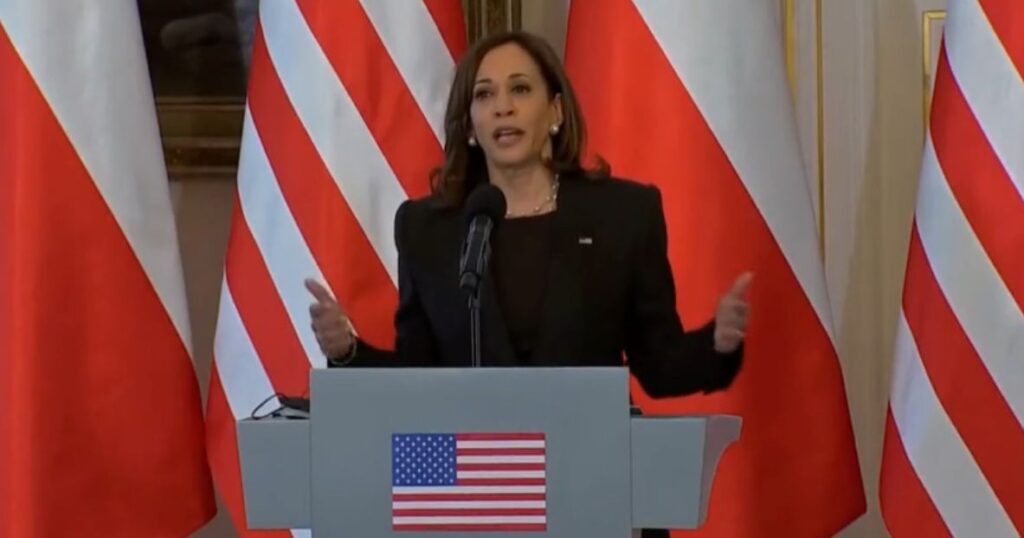 Kamala Harris, Vice President of the United States, and somehow, next in line for President when/if Joe Biden checks out, was recently dispatched to Poland to talk about NATO.

This turns out to have not been such a great idea. Watch:

Come again? Beside her was the baffled Polish President Andrzej Duda, who nodded and smiled and pretended to know what she was talking about.

Adding to the awkwardness was the fact that the U.S. had to formally reject Poland’s plans to drag America into World War III by furnishing jets to Ukraine that would be ‘back-filled’ by the Pentagon.

The U.S. did, however, agree to send Poland two new Patriot missile systems as well as $53 million in assistance to help defray the costs of new Ukrainian refugees.

Only Kamala Harris would find it appropriate to laugh when talking about the topic of Ukrainian Refugees.

“OK,” Harris said. “A friend in need is a friend indeed,” the veep added before laughing loudly.

“It would be a tragedy if this woman won the presidency,” Iuliia Mendel, the former Zelensky spokesperson, said in a response before deleting it.

“Kamala Harris has been very consistent during her live remarks with Poland’s leader,” said former Trump campaign aide George Papadopoulos. “She is awkwardly laughing. Again. Discussing refugees is no laughing matter. Why she laughs at this is deranged.”

“Nothing about any of this is funny,” remarked Fox News senior meteorologist Janice Dean.

This is how American elites act nowadays. Since none of their disastrous decisions impacts them personally, they feel free to laugh about them.

But here’s the real laugher: Biden administration officials doing their jobs and preventing a crisis like the Russian invasion of Ukraine from happening to begin with.

‘This is Preposterous’: Jen Psaki Lashes Out at Media for Reporting on Pentagon-funded Ukraine Biolabs