Kamala Harris will temporarily live out her dream of becoming president as Joe Biden is sent to Walter Reed hospital for a routine colonoscopy.

White House Press Secretary Jen Psaki issued a statement that Biden will travel to Walter Reed Medical Center on Friday morning for a “routine physical,” which includes a colonoscopy and the use of anesthesia.

“As was the case when President George W. Bush had the same procedure in 2002 and 2007, and following the process set out in the Constitution, President Biden will transfer power to the Vice President for the brief period of time when he is under anesthesia,” she said.

Jen Psaki said Acting President Kamala Harris will work from her office in the West Wing while Biden undergoes the colonoscopy procedure. A further statement will be released later on Friday afternoon, she added.

Here is the letter showing that the president’s powers were temporarily transferred to the vice president: 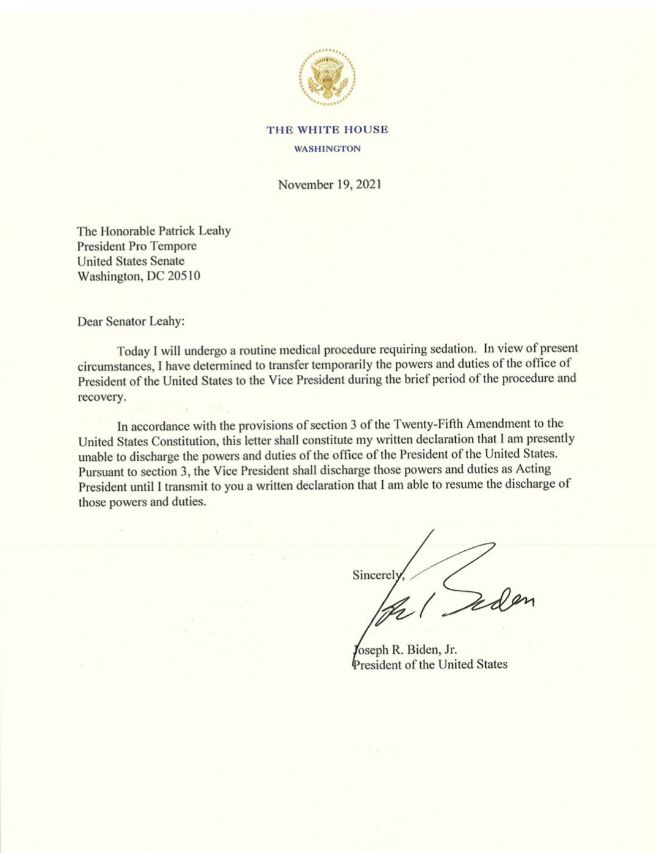 President Joe Biden is in increasing danger of his presidency being cut short by the invocation of the 25th amendment. In addition to evidence of declining mental capacity, he has had his share of embarrassing health-related questions.

Biden has also suffered from a series of abrupt cancellations. A live event with the Pope during his visit to Rome was canceled. On Thursday, a press conference between the visiting leaders of Mexico and Canada was suddenly canceled. The NY Post reported that his aides “were left scrambling to clean up a series of misstatements.”

While the mainstream press insist that the 25th amendment measure is unthinkable due to the current composition of the U.S. Congress, which must invoke the clause to remove Joe Biden, the Democratic Party may believe that Joe Biden has become expendable, and an overall negative for the party’s chances in the midterm elections or in 2024.

The Constitution gives the power to remove the sitting President of the United States to the Congress, which must pass by two-thirds vote a motion to remove the president in both the House and Senate.

Vice President Kamala Harris would thus be in a line of succession to take over the job of president. The former California Attorney General has been in the shadow of President Biden throughout his entire presidency. Her recent hit piece published at CNN revealed a growing feud between the camps, and that Harris is pressing hard to become the presidential nominee in 2024. Harris may wind up getting her wish, sooner rather than later.