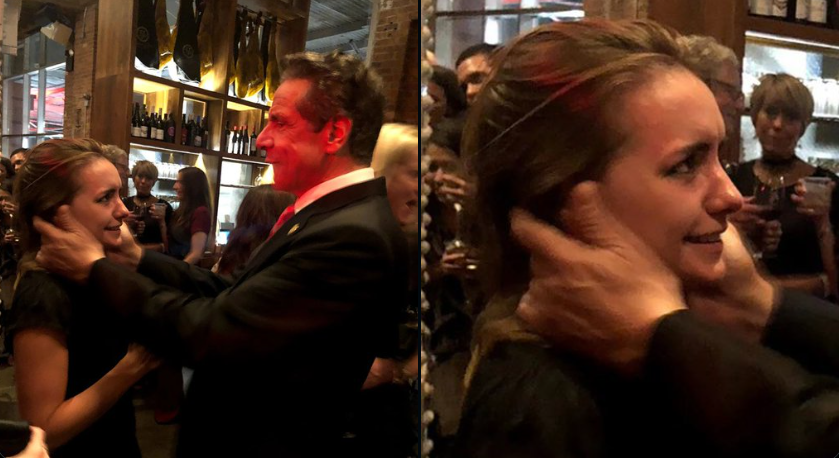 A picture is worth a thousand words. And in the case of the tail-spinning Cuomo administration, a thousand press releases.

Such was the case on March 1st, when the New York governor’s seedy past began getting exposed in the public limelight, as if some powerful mob bosses in the Democratic Party had authorized a political hit.

It started with a trickle, as such hits are wont to go. First it was the “sausage king of New York” story, which the Daily Mail cracked out from a 2016 video.

Alas, Cuomo telling a woman to “eat the whole sausage” was but a warm-up act, especially as the reporter at the focus of the story denies anything sexually suggestive about Cuomo’s remark.

Fine. Let’s chalk it up as a ‘phallacy.’

But much more was heaped on Cuomo’s plate when a photo was released showing the pure horror on a woman’s face as he laid his hands on her.

That woman? A third accuser that claims Andrew Cuomo got grabby with her. The New York Post related the accusation that the governor put the moves on her at a 2019 wedding.

“Anna Ruch, 33, told The New York Times that the 63-year-old governor made unwanted advances toward her and planted an unsolicited kiss on her cheek at the reception in Manhattan,” the report states.

“He said, ‘Can I kiss you?’” Ruch said. “I was so confused and shocked and embarrassed.”

So is the American public, at this point, about why Governor Cuomo hasn’t resigned yet. The account gets worse for Cuomo.

“I promptly removed his hand with my hand, which I would have thought was a clear enough indicator that I was not wanting him to touch me,” she continued.

Ruch describes Cuomo as “aggressive” and when he laid his paws on her cheeks and asked for a little sugar, it was loud enough for a friend of hers to hear it.

“I turned my head away and didn’t have words in that moment,” Ruch added.

Her friend caught the creepy advances with a series of photographs, one of them being the headline-grabber showing the terrified expression on her face.

It didn’t infuriate Geraldo Rivera, however, who somehow mustered up the pathetic defense that Albany is “boring.”

I am legitimately shocked by this:@GeraldoRivera live on Fox News making excuses for Cuomo’s serial sexual assault/harassment by saying: “He’s a 63 year old, single guy, living in Albany, the most boring town in America. He’s all by himself”

In 2019, Cuomo split from former Food Network star Sandra Lee and was previously married to Kerry Kennedy for 13 years. In 2020, disgustingly enough, Andrew Cuomo was named one of People’s Sexiest Men Alive, as well as the most “desirable man in New York City.”

It is but one example of a long-running love affair has had with the tyrannical New York Governor, whose capricious edicts and heavy handed lockdown decrees ended lives, shuttered businesses, and left thousands fleeing for the border.

All while the “liberal” ruling class drooled over his edicts, awarding him an Emmy, plugging his sociopathic memoir about his pandemic management, and giving him fawning paeans on slime time television.

CNN’s go-to interviewer for Governor Cuomo was none other than his own brother Chris Cuomo, whom his detractors affectionately call “Fredo.”

The “coronabros” ran a series of puff interviews on CNN’s air for months, all while elderly people were dying in nursing homes from Governor Cuomo’s disastrous March decree.

Patron saint of the coronabros Andrew Cuomo has now been accused of sexual harassment by a third woman prompting Chris Cuomo to make an on air explanation of why he isn’t covering this issue. As bad as this is for the Cuomo’s, it may be worse for CNN. https://t.co/uR2Ad8sKQj

Chris Cuomo not only failed to hold his brother accountable, but he bouyed his public image to such an extent that liberal lemmings believed Andrew Cuomo was their white knight, who had come down from the heavens above to save them from the vicious ‘Rona. Meanwhile, the much-better governing Florida governor Ron DeSantis was painted as the devil incarnate.

This Manichaeistic passion play played out on CNN’s airwaves throughout the entire 2020 election campaign, right up to Biden being installed as America’s dear leader thanks to a well-orchestrated shadow cabal.

Then, something funny happened. The left turned on Andrew Cuomo.

It wasn’t that Cuomo had ‘killed granny,’ you see, that piqued the Dems’ ire; it was that he had violated their arbitrary ‘me too’ standards. The same non-standards they refuse to hold against Joe Biden, even after his numerous unwanted acts of groping young women had been repeatedly caught on camera.

The media: "Resign you scumbag!"

“Obviously I am aware of what is going on with my brother,” Chris Cuomo said on Monday night. “And obviously, I cannot cover it because he is my brother. Now, of course, CNN has to cover it. They have covered it extensively and they will continue to do so.”

Fredo issued the statement during his Cuomo slime time show.

This is a remarkable about face from the coverage he previously gave the ‘Luv Gov.’

Not objective but true,the facts tell the story.NY had & has its struggles but they're doing way better than what we see elsewhere & no way that happens without the Luv Guv dishing the real 24/7.He works with relentless intensity & NY's better for it.And as a brother, I am proud. pic.twitter.com/M1TrAtQwCo

While CNN is in a hurry to forget about the ridiculous nightly charade the network put on, most viewers are not so forgiving.

Chris Cuomo can’t cover Andrew Cuomo’s scandals because covering his own brother would be a violation of journalistic ethics, you see pic.twitter.com/1sIbS2W3St

So doing a buddy comedy routine boosting your brother's political profile as he mishandles a pandemic = fun harmless primetime TV. Reporting on your brother killing thousands of elderly and covering it up, and sexually harassing staff = as a responsible journalist I must recuse. https://t.co/7YfF9oJxxb

Two other accusers have made serious allegations against Cuomo that are causing Democrats and liberals to call for a real investigation.

The New York Times reported on the most recent accusation on Saturday night:

A second former aide to Gov. Andrew M. Cuomo is accusing him of sexual harassment, saying that he asked her questions about her sex life, whether she was monogamous in her relationships and if she had ever had sex with older men.

And on Wednesday, Lindsey Boylan, another former Cuomo aide, had revealed her story about alleged sexual harassment, including a reported invitation to play “strip poker.”

The timing has all the markings of a Breitbartesque roll-out of accusations, such as the one that brought down former New York Rep. Anthony Weiner in 2011 for an underage sexting scandal. America recently passed the nine-year anniversary of Andrew Breitbart’s untimely death on March 1st, 2012.

Andrew Cuomo has replied to the sexual harassment accusations with a lengthy statement that strikingly appears to concede the upshot of the accusations.

“At work sometimes I think I am being playful and make jokes that I think are funny. I do, on occasion, tease people in what I think is a good natured way. I do it in public and in private. You have seen me do it at briefings hundreds of times. I have teased people about their personal lives, their relationships, about getting married or not getting married. I mean no offense and only attempt to add some levity and banter to what is a very serious business.

“I now understand that my interactions may have been insensitive or too personal and that some of my comments, given my position, made others feel in ways I never intended. I acknowledge some of the things I have said have been misinterpreted as an unwanted flirtation. To the extent anyone felt that way, I am truly sorry about that.

While Cuomo also proposed an “independent” investigation led by a hand-picked appointee deeply connected to his administration, he was shot down by his own Attorney General. This is not being swept under the carpet, the way it is for most Democrats.

Ironically, Andrew Cuomo’s attack on another high-profile figure accused of sexual assault has come full circle against the governor.

Cuomo’s own 2018 statement makes it imperative that we “Believe Survivors.” Fine, governor. Then these accusations should be “fully investigated,” according to your own words.

The attorney Governor Cuomo has hired to defend him says it all: Elkan Abramowitz.

“Elkan Abramowitz confirmed his hiring by the Cuomo administration to represent it in the nursing home probe,” NBC reported. “The white collar criminal defense lawyer may be most recognizable for previously representing New York figures like Woody Allen and Harvey Weinstein.”

That’s… quite the coincidence.

No one should be fooled by the Democrats’ sudden renewed interest in “me too” accusations, however. The Dems are giving Cuomo the “kiss of death” for the sexual imbroglio of unwanted advances for a specific reason: It covers up the ghoulish nature of the nursing home decrees.

Three other state governors issued such executive decrees: New Jersey governor Phil Murphy, Pennsylvania governor Tom Wolf, and Michigan governor Gretchen Whitmer. Democrats are not calling for these governors to resign. If the Dems called for Cuomo to resign over the needless deaths of nursing home residents, the political temperature would be turned up in these other states to a fever pitch.

The “look of fear” thus applies not only to the woman in this infamous photo, but the look of Democrats in these other states, where governors should truly be under the same amount of fire as Governor Cuomo.

There is another convenient reason for Democrats to bury Andrew Cuomo: It clears the field for Kamala Harris to run in 2024.

Let’s not forget that Democrats simply do not care that the current President of the United States has a long, well-documented track record of groping and kissing females against their will.

“Joe Biden has been accused by Lucy Flores, a former member of the Nevada State Assembly, of unwanted kissing and touching while he served as Barack Obama’s vice president in 2014,” Newsweek reported in 2019.

“My brain couldn’t process what was happening. I was embarrassed,” Flores wrote. “I couldn’t move and I couldn’t say anything. I wanted nothing more than to get Biden away from me.”

What is it with powerful Democrats striking fear into the hearts of females?