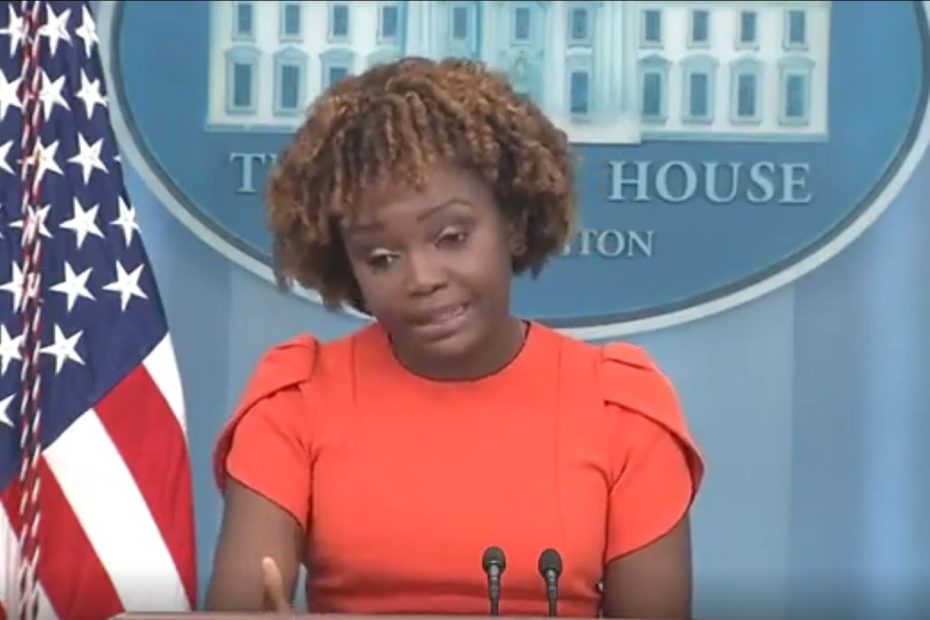 “There’s been a lot of confusion,” the reporter said. “Wondering if you can shed any light on this question of whether this White House, or this president, believes that a president has the ability to declassify, classify documents simply by saying so.”

“Look, we want to be very careful here,” KJP replied after a pause. “As you know, we are just not going to speak… It is really the question that you’re asking me is related to everything that is happening currently right now,with the Department of Justice and even ODNI. And I, as they, said, we’re aware of the letter, we did not have any advanced knowledge of the, of the letter.

The White House clearly coodinated with the National Archives in a set-up to the FBI raid. While there are threads for the dispute at hand beginning in April, there were rumblings of the plot to subject the former president to an invasive search goes back to October of last year.

Long before it professed no prior knowledge of the raid on Donald Trump’s estate, the Biden White House worked directly with the Justice Department and National Archives to instigate the criminal probe into alleged mishandling of documents, allowing the FBI to review evidence retrieved from Mar-a-Lago this spring and eliminating the 45th president’s claims to executive privilege, according to contemporaneous government documents reviewed by Just the News.

The JusttheNews report points to an exchange between the White House Deputy Counsel Jonathan Su was “engaged in conversations with the FBI, DOJ and National Archives as early as April, shortly after 15 boxes of classified and other materials were voluntarily returned to the federal historical agency from Trump’s Florida home.”

It is also important to note the Donald Trump was visited at his home in Mar-a-Lago in June and the FBI left without securing the documents, and reportedly indicating to Trump’s legal team that the documents were satisfactorily secured for the time being.

Then, the FBI waited months to launch a raid on Aug. 8, purportedly for documents that represented a grave threat to national security. Attorney General Merrick Garland waited weeks to “personally approve” the raid, and the FBI waited days to execute it after the search warrant was authorized by Magistrate Judge Bruce Reinhart.

The redacted search warrant affidavit, it should be noted, does not indicate that Donald Trump’s possession of the “classified” (declassified) documents are in legal contention, but rather that the documents were in “unauthorized spaces.”

In a court filing on Monday, federal prosecuters confirmed that the invasive FBI search had turned up a “limited” number of attorney-client privileged documents.

The Supreme Court, nevertheless, has strongly backed presidential classification authority in cases such as Department ofNavy vs. Egan. The President of the United States has the authority to declassify information by simply saying ‘this is declassified.’

The Wall Street Journal, in a recent editorial on the matter, corroborates the New York Times’ tacit concession that there is no ‘there, there’ in terms of Donald Trump having allegedly committed a crime affecting national security.

Nothing in the PRA suggests that the former president’s physical custody of his records can be considered unlawful under the statutes on which the Mar-a-Lago warrant is based…. Nothing is said about the former president himself, but applying these general criminal statutes to him based on his mere possession of records would vitiate the entire carefully balanced PRA statutory scheme.

Thus if the Justice Department’s sole complaint is that Mr. Trump had in his possession presidential records he took with him from the White House, he should be in the clear, even if some of those records are classified.

It has even been conceded that even if Trump’s possession of the “classified” documents violated the Presidential Records Act, which is a Civil Act and not a criminal statute, it likely would not prevent him from running and winning the presidency.

The FBI raid is yet another giant fiasco that does tremendous damage to America’s rule of law, but fails to do real damage to Donald Trump. It is just another ‘bombshell’ that has blown up in the Democratic Party’s faces.