L.A. County Sheriff Alex Villanueva is standing up against the county’s latest mask mandate, which applies to both vaccinated and unvaccinated individuals in the public while indoors in the county.

The sheriff issued the following statement on Friday that makes it clear that his department will not be enforcing the new mandate.

“Forcing the vaccinated and those who already contracted COVID-19 to wear masks indoors is not backed by science and contradicts the U.S. Centers for Disease Control and Prevention (CDC) guidelines,” the sheriff stated.  “The Los Angeles County Department of Public Health (DPH) has authority to enforce the order, but the underfunded/defunded Los Angeles County Sheriff’s Department will not expend our limited resources and instead ask for voluntary compliance. We encourage the DPH to work collaboratively with the Board of Supervisors and law enforcement to establish mandates that are both achievable and supported by science.”

The sheriff’s statement appears to reference a ‘defund the police’ measure that was adopted in November, which preceded an escalating wave of violent crime.

“Los Angeles voters have approved Measure J, also known as ‘Reimagine LA County,’ which requires that 10 percent of the city’s unrestricted general funds — estimated between $360 million and $900 million per year — be invested in social services and alternatives to incarceration, not prisons and policing,” Vox noted.

The funds appear to have been unwisely spent. Violent crime, and particularly, homicides, have skyrocketed in Los Angeles.

“If the current pace of killings continues, L.A. would end the year with about 433 homicides — a sharp increase over the 254 killings recorded in 2019,” the L.A. Times reported, noting “that 2020 — with 349 killings — was a very unusual year for homicides with a small increase in killings in the first half of the year, followed by a dramatic rise in the second. ”

Despite the rise in COVID-19 cases being portrayed as a public health emergency, the L.A. county mask mandate was delayed in its implementation by three days.

“The mandate — which applies to both vaccinated and unvaccinated people in shops, gyms and retail stores, as well as restaurants when not eating or drinking — takes effect just before midnight on Saturday,” the New York Post reported.

While the COVID-19 “Delta variant” has led to a surge in cases in the county, the daily number of deaths with COVID remains modest and flat at roughly 2 per day. 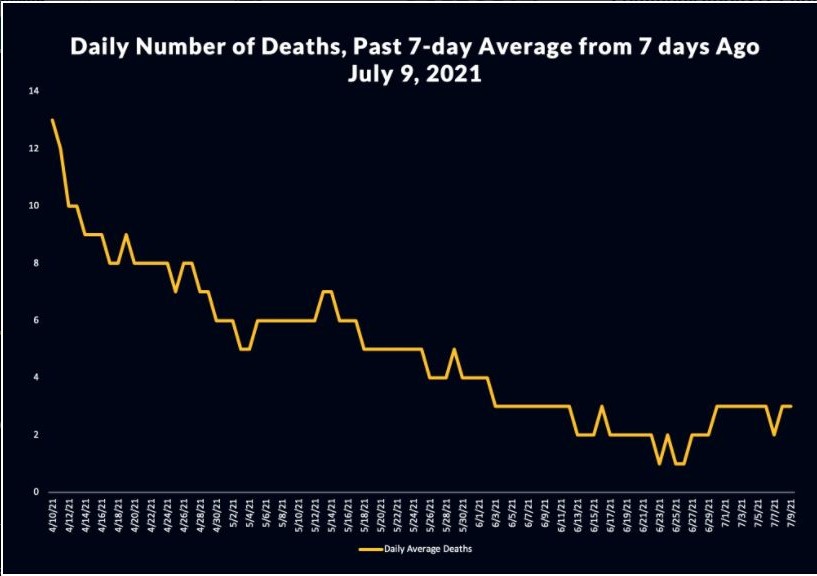 Supervisor Kathryn Barger tweeted Friday that the mask mandate is not helpful with the imperative to get more people vaccinated.

“I am concerned by rising cases, but I don’t believe the mask mandate will help efforts to stress vaccine efficacy and compel unvaccinated residents to get vaccinated,” she tweeted.

“LA County should remain aligned with the State instead of creating confusion and disagreement at the local level.”

Nonetheless, despite the public confusion being caused by L.A. County’s new mask mandate, which did not work to significantly stop the spread of COVID the first time, seven more counties are now recommending masks be worn indoors, even for the vaccinated. It is just a recommendation — for now.