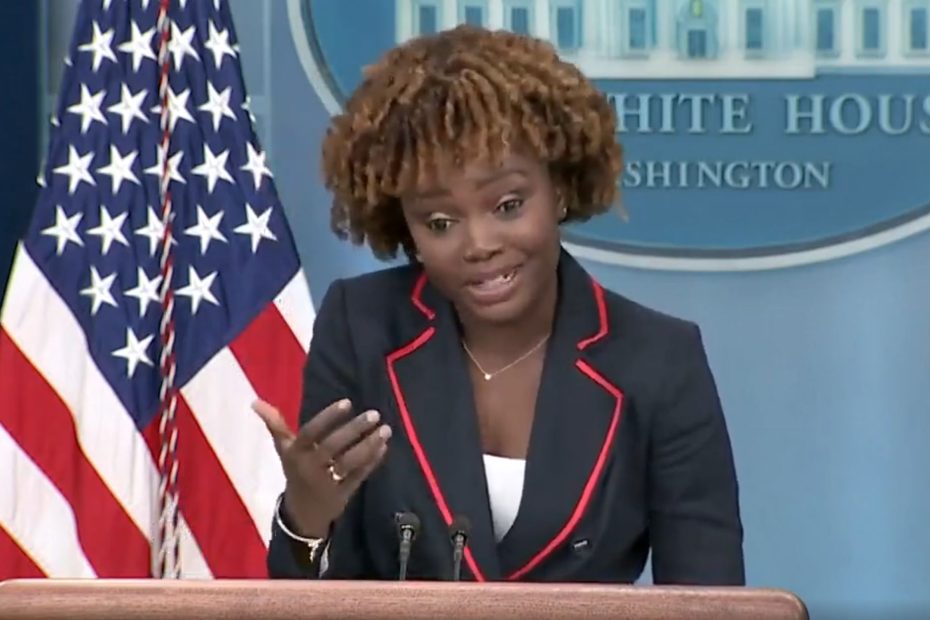 “And here’s the thing: The President is not going to shy away to call out what he clearly sees is happening in this country,” she said. “And, you know, again, MAGA Republicans are this extreme part of their party, and that is just facts. And that’s what he’s going to continue to lay out.”

There is only so much time to unpack such ridiculous propaganda, but since there are Americans left who somehow still take the Biden presidency seriously, let us start with the basics.

There were over 74 million Americans who voted for Donald Trump in the 2020 election. Even while acknowledging that not all of them are hardcore fans of Donald Trump, millions of those voters will feel personally attacked for having supported Trump in the election; and furthemore, more voters are compelled to support Trump again than Joseph Biden in a 2024 rematch, should these two political rivals decide to run again.

Simply put, this divisive rhetoric out of a White House less than two years into its failed presidency is attempting to scapegoat Trump supporters, who are overwhelmingly law-abiding, peace-loving and responsible citizens. One might pose that over ninety-nine percent of Trump supporters are taxpaying and loyal Americans who love their country. Smearing these good and decent people as if they are ‘enemies of the state’ is a page right out of the fascist playbook.

It thus adds further cause for concern when the Biden administration repeatedly strives to paint its political opponents as “fascists” or “semifascists,” which is a dubious and vile practice worthy only of crypto-communists like Antifa and despotic regimes like Russian president Vladimir Putin’s. And given the Biden regime’s history of authoritarian decrees like the Covid vaccine mandates, which violate basic human rights, the regime’s protests against “fascists” underneath every bed strike more astute political observers as nothing more than a bad case of projection.

Thus, we return to the radical left’s shopworn tactic of scapegoating opponents as a way to cloak its own failures and misdeeds.

The White House compulsively points to the Capitol riots as presumptive evidence of guilt on the part of the millions of innocent Trump supporters, who had nothing to do with the fringe, unarmed extremists who carried out a siege on the Capitol on January 6 and not all of whom sought to ‘overturn the election.’ The glaring hole in the Biden regime’s narrative for any thinking person is that the so-called January 6 “insurrectionists” had no legal nor martial means to carry out a successful “coup” against the U.S. government.

Indeed, on Tuesday, President Biden himself taunted Second Amendment supporters, “If you want to fight against the country, you need a F-15, you need something a little more than a gun.” January 6 supporters did not even have a gun, let alone F-15s. Therefore, how did they constitute an existential threat to the country?

But in Joe Biden’s retelling (and oddly, Twitter did not flag the post as ‘dangerous misinformation’), there were MAGA Republicans who killed police officers on January 6. This is, quite plainly, a load of malarkey.

"Imagine…if you turned on the television in Washington D.C., and saw a mob of a thousand people storming down the hallways of the Parliament, breaking down the doors, trying to overturn an outcome of election, and killing several police officers." pic.twitter.com/VSSdQW1sLp

“Imagine…if you turned on the television in Washington D.C., and saw a mob of a thousand people storming down the hallways of the Parliament, breaking down the doors, trying to overturn an outcome of election, and killing several police officers,” Biden claimed at a Pennsylvania event.

You would have to “imagine,” because it didn’t happen. The only person killed on January 6 was a Trump supporter named Ashli Babbitt. Officer Brian Sicknick, whom the media repeatedly implies died as a result of violence during the Capitol Riots, was judged by a medical examiner to have died of natural causes. Additional deaths that are tied to January 6 include three others from natural causes among the protesters and at least four suicides by police officers in the aftermath.

Thus, returning to the display of ignorance by Ms. Jean-Pierre, she had more to say about the nefarious “MAGA Republicans” who mysteriously constitute a “threat to democracy,” under one of the most lawless regimes in the nation’s 246-year history.

The White House Press Secretary added after her opening salvo that “violence or threats of violence have absolutely no place in our society… It doesn’t matter which side of the aisle that you’re sitting on. We need to denounce that.”

Yet, there are high-ranking officials in the Biden administration who did more than fail to “denounce” the deadly Black Lives Matter riots — they actually contributed to them; whether through incendiary rhetoric or outright funding the bail of violent rioters, like Kamala Harris did, including, ultimately, rapists and murderers.

But setting aside the Democrats’ miserable policy failures, such as propagating the border crisis and remaining willing bystanders to criminals wrecking America’s once-beautiful cities, there is the problematic matter that Democrats have done more to undermine confidence in the nation’s elections in the past twenty years than Donald Trump’s actual supporters ever did.

The Democratic Party, one might recall, made vehement objections to the 2000, 2004, and 2016 elections, pointing to a number of alleged issues, including malfunctioning voting machines. And furthermore, in 2016, those grievances fueled violent riots during the Trump Inauguration. These riots were ignited by a Big Lie — Donald Trump had colluded with Russia to “rig” the 2016 election against Hillary Clinton.

Hillary Clinton has steadfastly argued that the 2016 election was “stolen” from her, which has persisted in the face of the Democrats’ complaints about such political hyperbole. And indeed, the White House Press Secretary has her own checkered past of election denials.

“Yes — the race was stolen,” she tweeted in 2019 about the Georgia Governor’s race that Stacey Abrams refused to concede. KJP also said in response to another Twitter user’s post: “Reminder: Brian Kemp stole the gubernatorial election from Georgians and Stacey Abrams.”

So, it turns out by the Biden regime’s low standards that the White House’s inflammatory rhetoric is the actual “threat to democracy.” If the press secretary’s sneak preview of Biden’s primetime address is any indication, Americans can expect that threat to continue.